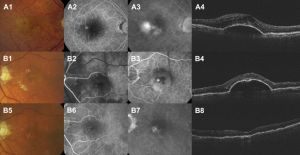 Retinal Angiomatous Proliferation (RAP) was described by Yannuzzi and co-workers as a distinct form of neovascular Age-Related Degeneration (AMD).

There has been some controversy on whether neovascularization arises from the retina or from the choroid. Yannuzzi et al stated in their last review that it is possible that angiogenesis starts in the retina, choroid or both, and they proposed an alternative name for this process: Type 3 neovascularization.[1] This new designation would apply to neovessels within the retina and right underneath and it integrates with the classical neovascularization classification by Gass (Type 1 neovessels being located under the retinal pigment epithelium and Type 2 under the neurosensory retina). RAP remains however the most widely used denomination.

Patients with RAP tend to be older than patients with other forms of neovascular AMD (mean age of 79 vs 76, respectively). It is most common in white patients, and may also be seen in asian patients. As of 2008, according to Yannuzzi and colleagues, there was no report of RAP in black patients.[1]

Three stages were originally described by Yannuzzi and co-workers:

Representative images can be accessed at https://www.reviewofophthalmology.com/article/retinal-angiomatous-proliferation-in-amd

Vascular proliferation originates from the deep capillary plexus of the retina in the paramacular area and is confined within the retina, as a retinal-retinal anastomosis. Intraretinal haemorrhage and edema are common. Telagiectatic vessels can be seen around the IRN, presumably as a compensatory response to the increased vascular perfusion needed by the IRN.

The initial lesion is located extrafoveally, presumably because of lack of capillaries in the foveal avascular zone.

The presence of small macular haemorrhages, sometimes punctiform, often multiple, associated with oedema in an eye with soft drusen, is highly suggestive of RAP in its initial stages. Hemorrhages can be pre, intra or subretinal. Large subretinal hemorrage is rarely seen in stages I and II. As angiogenesis progresses, tortuous, dilated retinal vessels, sometimes showing retino-retinal anastomoses can be found.

Involvement is typically bilateral, with 80% of fellow eyes affected after 1 year and 100% before 3 years.

Representative images can be accessed at https://amdbook.org/content/neovascular-phenotypesrap-retinal-angiomatous-proliferation

Retinal angiomatous proliferation demonstrate good response to anti-vascular endothelial growth factor agents (Anti-VEGF). In the Comparison of Age-Related Macular Degeneration Treatments Trials (CATT), when treated with intravitreal ranibizumab or bevacizumab, eyes with RAP were less likely to have fluid, FA leakage, scar, and subretinal hyperreflective material were compared with all other eyes with neovascular AMD but without RAP.[2] Visual acuity outcomes at 1 year were better in the RAP group than in the non-RAP group, however, these differences did not persist at year 2. In addition, eyes with RAP were also found to be more likely to have geographic atrophy than eyes without RAP.