Retinal capillary hemangioblastomas (RCH) (also known as retinal angiomas) can be a a sign of a von Hippel-Lindau (VHL) disease although they may also be observed as an isolated entity without systemic involvement. RCH is the most frequent and earliest manifestation of the VHL disease and therefore an ophthalmologist is often involved in the care of these patients. This article will touch open the important concepts of the retinal capillary hemangioblastoma, a cardinal feature of VHL syndrome. Further information about the other systemic manifestations of VHL syndrome can be found in the resources section of the article.

von Hippel-Lindau disease is a heritable multisystem syndrome that is associated with a germline mutation of the VHL tumour suppressor gene on the short arm of chromosome 3. The incidence of this disorder is approximately 1 in 36,000 live births and it is inherited in a high penetrance autosomal dominant pattern. This disease is characterized by the growth of various benign or malignant tumors of the retina and the brain, along with cysts of several visceral organs such as the kidneys, pancreas, and adrenal glands and reproductive organs.[1] Therefore, the management of such patients necessitates a multi-disciplinary approach.

The name of VHL disease derives from two prestigious European physicians, Eugen von Hippel and Arvid Lindau; however, others

have contributed as well in the recognition of the syndrome. Early observers of the syndrome were the English neurologist John Hughlings Jackson (1872) and the German ophthalmologist Hugo Magnus (1874).[2] Ernst Fuchs  described this angiomatous condition in the retina in 1882 followed by Treacher Collins (1894) who noticed its inherited nature[3][4]. A few years later, in 1904, Eugen von Hippel (August 3, 1867 - September 5, 1939) a German ophthalmologist, who studied medicine in Heidelberg under Theodore Leber described the retinal angiomas, in his seminal paper entitled “Ueber eine sehr seltene Erkrankung der Netzhaut ( transl : About a very rare disease of the retina”), which he named "angiomatosis retinae"[5]. Coats described a similar condition as well in 1908.[6] 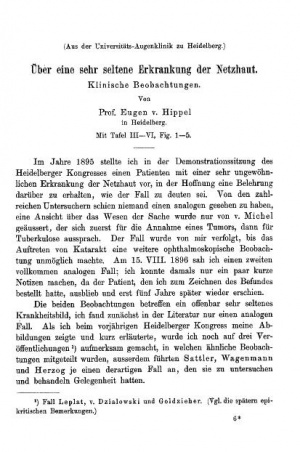 The typical association of angiomas of the retina with the cerebellum was first described in 1905 by the Prague ophthalmologist Wilhelm Czermak, long before Arvid Lindau (1926).[7] Lindau, a Swedish pathologist,  wrote a thesis about the association between cerebellar and retinal capillary hemangiomas as a heritable entity. He described his observations in his thesis entitled "Studien über Kleinhirncysten. Bau, Pathogenese und Beziehungen zur Angiomatosae retinae (transl : Studies about cerebellar

Lindau’s work draw the attention of the neurosurgeon Harvey Cushing, who published a case of cerebellar hemangioma referring to this entity as “Lindau’s disease”.[9] The term von Hippel-Lindau disease was first used in 1936 by Davison [10], but it was not used commonly until the 1970s.

VHL results from a germline mutation in the VHL gene which is a tumour suppressor gene located on the short arm of chromosome 3 (3p25–26). This discovery by Latif and colleagues in 1993 was a seminal step in the understanding of the molecular pathology of VHL disease.[11] It is now believed that tumor formation in VHL disease follows the "2-hit model," initially hypothesized by Knudson for retinoblastoma i.e affected individuals inherit a mutated VHL gene which is present in all the cells of affected individuals.[12] However, only those cells that undergo a deletion or mutation of the remaining wild type allele, and are constituents of susceptible target organ will undergo tumor formation.

VHL gene encodes the VHL protein, which is a tumor suppressor protein. The protein forms a complex with other proteins including elongin B, elongin C, and Cullin 2 (CUL2), to form the 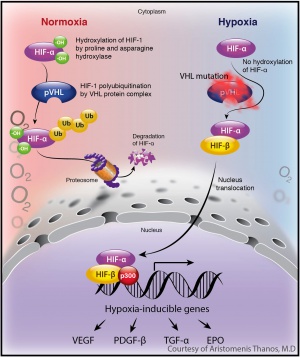 VCB- CUL2 complex. This protein complex plays an important role in the ubiquitin-mediated degradation of intracellular proteins through the proteasome. Under normoxic conditions, the VHL protein complex binds to, and targets, the alpha subunits of hypoxia-inducible factors (HIF) 1 and 2 for ubiquitin-mediated degradation by the proteasome. HIF1a and HIF2 are potent transcriptional factors that are important for the cellular response under hypoxic conditions, since they enhance glucose uptake and increase expression of angiogenic, growth, and mitogenic factors including vascular endothelial growth factor (VEGF), platelet derived growth factor (PDGF), erythropoietin (EPO) , and transforming growth factor (TGF).[13] 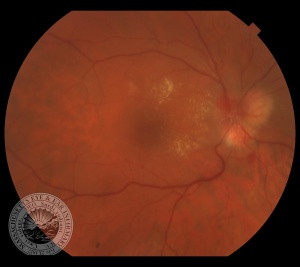 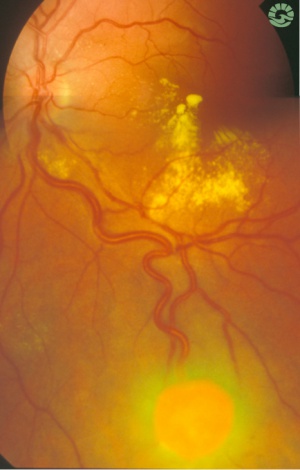 The retinal capillary hemangioblastoma (RCH)  is the most frequent and earliest manifestation of VHL disease with a mean age of diagnosis of 25 years.[14][15][16] The clinical presentation of retinal capillary hemangioblastoma varies greatly depending on the size and location of the tumor. In a large cross sectional study performed by the National Eye Institute where 335 VHL patients were enrolled, RCH was was unilateral in 42% of cases and bilateral in 58%. Peripheral lesions were identified in approximately 85% of patients and juxtapapillary lesions in 15%.[17] Peripheral lesions have often a subtle red hue and they are no larger than a few hundred microns. As the proliferation continues, they develop a more nodular appearance leading to a characteristic clinical appearance with marked dilated and engorged afferent and efferent blood vessels. Retinal edema and hard exudates are often seen in association with the tumor and they may often involve the macula. Juxtapapillary lesions, encountered in approximately 11-15% of cases, can cause pseudopapilledema from elevation and exudation around the optic nerve and it can be the sole manifestation of retinal VHL disease.[18] Retinal or vitreous hemorrhages are rarely observed, occurring in less than 3% of cases.[19] 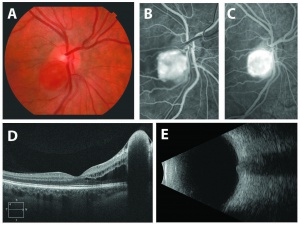 The diagnosis of the retinal capillary hemangioblastoma is primarily clinical. Dilated fundus exam is essential in identifying all the existing RCHs, as they may reach up to 11 in number.[20] A classic diagnostic finding is the dilated, tortuous vessels leading to and away of the vascular tumor. Fundus photography, especially ultra-widefield retinal imaging to capture the location, number, and  size of the peripheral lesions may be helpful in following the growth or regression of the lesions. Fluorescein angiography typically shows early leakage and marked hyperfluorescence. Macular edema associated with these lesions may also be detected by means of  optical coherence tomography.

The diagnosis of retinal capillary hemangioblastoma (RCH) can be made most of times based on dilated fundus examination together with careful questioning of the past medical (if any) and/or family history. Below, is a list with the possible conditions that can mimic a RCH  :

In the largest cohort study performed by the NEI, risk factors for associated vision loss were age of the patient and location of the tumor.[21] The risk of severe vision loss also increased with the presence of juxtapapillary lesions and increasing peripheral tumor number and the extent of the retinal involvement. In the same study, approximately 77% of patients had vision of 20/20 or better whereas the overall prevalence of legal blindness from ocular VHL was low at 5.7% with vision less than 20/160 in the better-seeing eye. In summary,  vision loss from RCH can occur through a variety of mechanisms listed below : 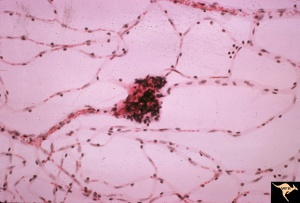 The three major types of cells of the retinal capillary hemangioblastoma are endothelial cells, pericytes, and "foamy" stromal cells.[22]  The endothelial cells are fenestrated, providing the basis for the exudation that is characteristic of the tumor. [23]The stromal cells contain abundant lipid vacuoles and a few organelles. In the past, ultrastructural and immunohistochemical studies have suggested that these “stromal” cells may represent lipidized fibrous astrocytes or glial cells.[24]


Using tissue microdissection and polymerase chain reaction amplification techniques, Chan and coworkers showed  that the “stromal” cells of the retinal angioma  have a complete loss of VHL gene and enhanced VEGF gene expression. [25]The pVHL, the VHL suppressor gene product, is known to downregulate vascular endothelial growth factor (VEGF) expression. With the absence of pVHL, VEGF is upregulated, resulting in neovascularization on and around these retinal capillary hemangioblastomas. This study provided a very strong evidence that the vacuolated stromal cells represent the true neoplastic component of retinal angiomas. This is further supported by animal studies, where VHL gene has been selectively ablated in astrocytes using Cre-LoxP conditional gene targeting techniques, recapitulating the phenotype of human disease. [26][27]

Hematoxylin and Eosin stain of a RCH in a patient with VHL disease. Notice the enlarged dilated vessels (V) and the foamy stromal cells (C).S=sclera . A = 20x, B=40x, C= 200x. Images courtesy of Rebecca Stacy, M.D,Ph.D

Various treatment modalities have been reported in the literature for the management of RCH, including observation, laser photocoagulation, cryotherapy, plaque and proton beam radiotherapy, and vitreoretinal surgery. It is important to notice that the efficacy and applicability of these modalities are very much influenced by the 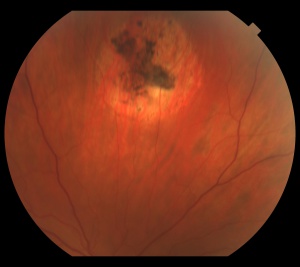 location of the tumor (peripheral vs juxtapapillary), size of the tumor and finally the  presence of any associated findings (e.g subretinal fluid, exudation, evidence of traction).

Very small, non-visually-threatening peripheral lesions (< 500uM) with no associated exudation can be observed as they may undergo regression or remain stable. Observation is often preferred in cases of juxtapapillary hemangiomas, where the application of other treatment modalities is associated with significant morbidity.

Argon laser photocoagulation has been the mainstay of treatment for peripheral lesions less than 3.00mm with no associated subretinal fluid. Several studies have studied the efficacy of Argon Laser Photocoagulation in the treatment of RCH and are summarized in the following table (only studies with > 30 RCH were included)

In cases where significant subretinal fluid is present, the RCH is located anteriorly and the tumor size larger is than 3.00mm,  cryotherapy is the preferred modality. Lincoff was among the pioneers who described the use of cryotherapy for the management of RCH.[31] The cryotherapy technique is the one originally described by Welch. [32] Temperatures of -80oC and no more than 2 freeze cycles are applied to control the tumor.

Use of anti-VEGF has been proposed as an adjunct in the management of RCHs. Unfortunately, there is no large clinical trial to date examining the efficacy of anti-VEGF agents in the management of VHL patients. In a small cohort study performed by the National Eye Institute, ranibizumab (Lucentis) treatment demonstrated promising, but minimal, success on most VHL-related hemangioblastomas. The study concluded that ranibuzimab may aid in control of associated findings (i.e decrease in subretinal fluid) but had limited efficacy on the RCH itself.[33]

Very rarely, RCH tumors can cause lead to a retinal detachment. If this is exudative, observation may remain the best management options, but if there is a tractional or rhegmatogenous component, then vitreoretinal surgery may be necessary. There have been a handful of reports in the literature describing techniques that have been utilized in excising a retinal capillary hemangioblastoma.[34][35][36] While clinical outcomes have been mixed, there have been several cases with reported visual improvement postoperatively. See this LINK for a surgical video demonstrating one technique of RCH resection.

Photodynamic dynamic therapy[37] and proton beam irradiation[38] have also been utilized with variable results, but more data is needed.[39]