Retinal oximetry is a non-invasive imaging technique that allows reproducible calculation of retinal blood vessel oxygen saturation. Use of the technique has been evolving.[1]

The first use of oximetry in a clinical setting was in 1935, when a German doctor produced an ear oximeter. Early versions of retinal oximetry arose in the 1950s, but advances in digital technology within the past decade have allowed for emergent clinical and research applications. There are currently two main systems: the Oxymap Retinal Oximeter (Fig. 1-2) and the Vesselmap system (Fig. 3). [2] [3] [4] 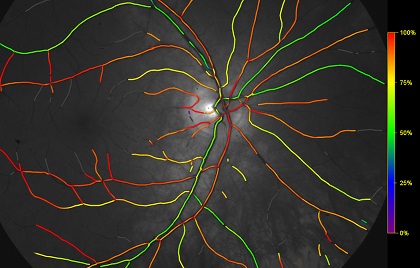 Figure 1. Image from the Oxymap system showing the oxygen saturation in the retinal vessels; Retrieved from http://www.oxymap.com/ on 12/18/14. 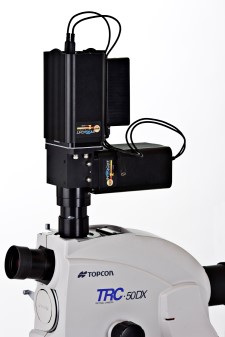 Figure 2. Picture of the Oxymap device installed and mounted on top of the Topcon TRC-50DX/IX fundus cameras; Retrieved from http://www.oxymap.com/?page_id=1196 on 12/18/14. 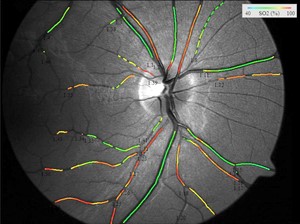 Figure 3. Image from the Vesselmap system showing the oxygen saturation in the retinal vessels; Retrieved from http://www.imedos.de/Oxygen-Module.147.0.html?&L=1 on 12/18/14.

Although retinal oximetry systems can differ slightly, the foundation consists of a fundus camera with an attached image splitter. The image splitter contains mirrors that split the beam from the camera into smaller beams based on wavelengths of light. Some systems will employ filters that further filter the beam. The apparatus also includes a digital camera to record the fundus images. Analysis of the images has been shown to be most effective with comparison of the images at two distinct wavelengths, at about 600 nm (sensitive to oxyhemoglobin) and about 570 nm (not sensitive to oxyhemoglobin). Computer software uses light absorption and optical density to calculate relative vessel oxygenation. Multivariate regression analyses of studies on normative values in healthy subjects has shown no significant associations between retinal oxygen saturation (SO2) and iris pigmentation, ethnicity, gender, and smoking status. Aging, however, is a factor that has been shown in some studies to decrease retinal venous (SvO2) and arterial oxygen saturation (SaO2) and therefore must be accounted for in interpreting and comparing measurements.[2][3][4][5]

Retinal oximetry studies have suggested that retinal oxygenation saturation can be a useful biomarker in these disease entities[8]. In central retinal vein occlusions, oxygen saturation has been found to be lower in venules, which corresponds to the venous hypoxia expected in this condition. Hypoxia is a primary driver of VEGF-mediated macular edema, neovascularization and other sequelae that occurs after CRVO. Studies show that retinal venous oxygen saturation correlates with the level of ischemia and can also predict disease sequelae[9]. In contrast, central retinal arterial occlusions show decrease oxygen saturation in the retinal arterioles. This feature might be useful diagnostically, especially in cases that affect both venous and arteriolar vascular supplies.

Diabetic retinopathy[7][10] [11] is a disease caused by damage to the retinal capillaries as a result of chronic hyperglycemia. Similar to retinal vascular occlusions, hypoxia is a central feature of the disease process and pathophysiology. Retinal oximetry analysis indicates that patients with retinopathy in general have higher venous oxygen saturation levels than healthy subjects. This seemingly paradoxical oximetry finding is likely due to poor oxygen distribution, increased total blood flow, and/or decreased oxygen consumption[8]. The relative increase in venous oxygenation has been shown to correlate with diabetic retinopathy severity[12][13]. In addition, following laser photocoagulation treatment, the arteriovenous saturations indicate improved distribution of oxygen delivery[14]. As such, retinal oximetry has promising clinical applications for the diagnosis and management of the disease. (Fig 4A & B) 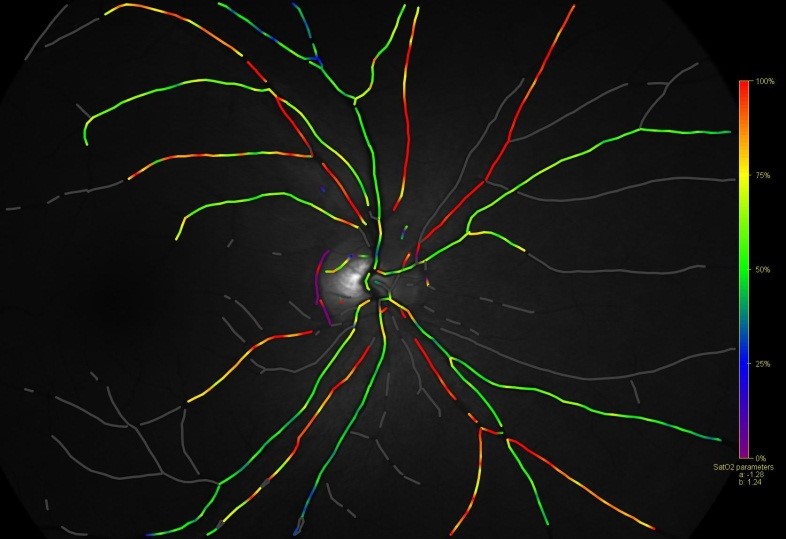 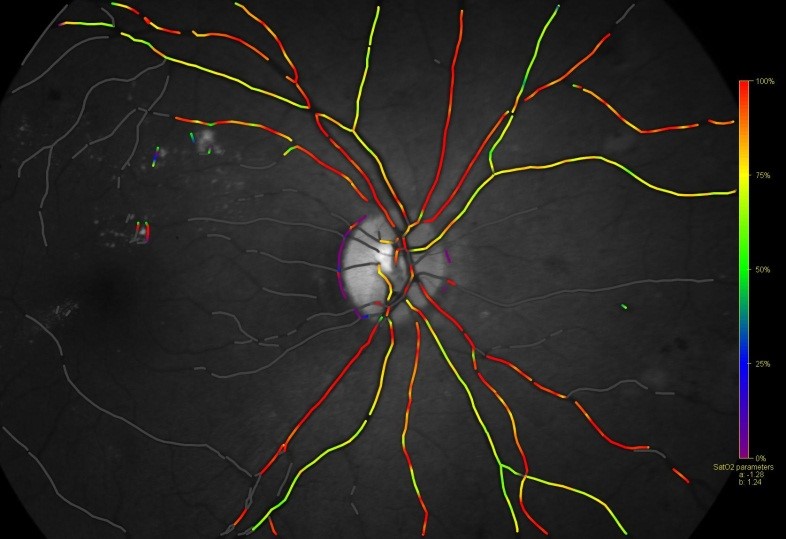 Figures 4A & B. Comparison of oximetry for a healthy patient in top image (A) and a patient with moderate NPDR in image directly below (B); Retrieved from the UNC Kittner Eye Center.

Glaucoma[7][15] [16] is a chronic optic neuropathy with progressive injury to optic nerve axons and subsequent atrophy of retinal nerve fiber layer and ganglion cells. This atrophy is expected to reduce oxygen consumption in the inner retina. Consequently, venous oxygen saturation and arteriovenous saturation differences can offer insight into glaucomatous disease progression and provide new modalities of monitoring patients. Research also suggests that retinal vascular dysregulation might be part of the primary pathophysiology in certain types of glaucoma[8]. In addition to aiding in diagnosis and monitoring glaucoma, retinal oximetry might therefore offer new insight into a incompletely understood disease entity. Additional oximetry studies have shown a mild difference in oxygenation pre- and post-glaucoma treatment, which correlates with intraocular pressure changes[17].

Studies of retinal oximetry in adults and children with inherited retinal disease have demonstrated reproducible and significant differences in oxygen consumption. The oxygen saturation is increased in patients with IRDs, particular rod-cone dystrophy, due to decreased oxygen consumption. The increased oxygen saturation is hypothesized to contribute to photoreceptor and retinal degeneration through the accumulation of oxygen free radicals. Additionally, the changes in oxygen saturation values have been shown to correlate with structural and functional changes in IRDs as well. As additional investigation is performed, retinal oximetry might emerge as a biomarker to detect progression or to monitor therapeutic effect of future treatments. [18][19][20]

In addition to characterizing other ischemic retinal diseases such as age-related macular degeneration and retinitis pigmentosa, retinal oximetry can exist as a potential biomarker for systemic diseases. Investigation into its utility for cardiopulmonary disease states and as a surrogate for systemic oxygenation show early promise, as do studies proposing hypotheses that retinal vascular changes might relate to Alzheimer's disease in the central nervous system. The technology and areas of application continue to evolve.