Rhino-orbital-cerebral-mucormycosis (ROCM), previously referred to as orbital zygomycosis, refers to the presentation of pathologic symptoms in the orbit as a result of fungal infections caused by fungi in the order Mucorales, most commonly by the species Rhizopus oryzae. ROCM usually occurs in an immunocompromised host and presents with initial symptoms such as vision loss, ptosis, diplopia, and external ophthalmoplegia. Left untreated, ROCM can progress to acute vision loss, metastasis (brain, sinuses) and death [1][2].

The primary species responsible for the development of ROCM is the fungus Rhizopus oryzae. This fungus is a fast growing, aseptate filamentous fungus that is responsible for nearly 90% of all rhinocerebral cases and has an overall mortality rate of over 50%[3] [2]. Rhizopus oryzae is commonly found in tropical and subtropical regions, such as Australia, India, and the coastal parts of Texas[4]. Like most diseases of fungal origin, mucormycosis is usually introduced to the body through inhalation of spores. The two characteristics most often responsible for the proliferation and development include its propensity for induction of angiogenesis and rapid growth rate.

Ketoacidosis is a very common predisposing factor for invasion and spread by mucor. Under acidotic conditions, iron fails to bind to its sequestering proteins like transferrin and becomes available to invading pathogens like mucor, which depend on iron for survival. This makes ketoacidosis a very susceptible predisposing condition for development of ROCM[6]. This is also the mechanism for iron overload conditions to cause ROCM (e.g., hemochromatosis, multiple blood transfusions, desferroxamine). Mucormycosis commonly begins after the paranasal inhalation of spores and the formation of coenocytic hyphae that can spread. Once inhaled, they initially proliferate in the sinuses and can find their way to the orbit either through direct invasion or via the nasolacrimal duct. It can gain access to the brain either via spread from the orbital apex, cavernous sinus, through the cribriform plate, or through the blood vessels.

The primary mechanism of spread is through angioinvasion of blood vessels: vasotropic. It causes causes thrombosis, ischemia and disseminates necrosis with poor bleeding. Therefore, frequently in orbital invasion the eye lacks of the typical “hyperemia” (redness) of infection.. The angioinvasion also gives the fungus access to additional heme as a source of iron [6]. 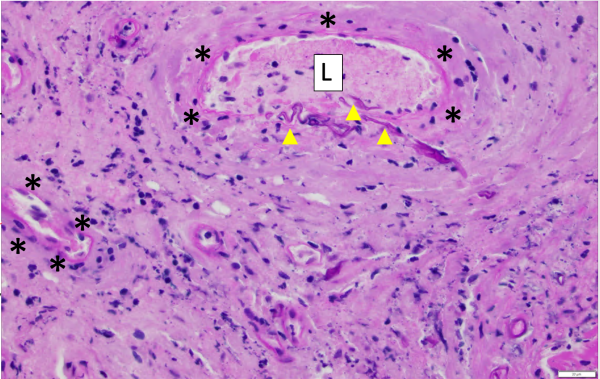 One critical step that allows for angioinvasion to occur is the penetration of and damage to the endothelial cells and extracellular matrix proteins lining the blood vessels. One receptor that is known to be involved in the penetration process is a protein known as glucose-regulated protein (GRP78)[6].

Once spread to the orbit, the disease is classified as ROCM. Initial ophthalmic problems presenting in ROCM are due to the tissue inflammation resulting from necrosis of the adjacent tissue to the orbit and reduced blood flow. Potentially serious ophthalmic problems associated with ROCM include occlusion of the central artery of the retina and infraction of the orbit including the optic nerve and can ultimately cause complete vision loss. From the orbit, ROCM can spread to the brain through the cribriform plate and orbital apex, causing potential complications such as internal carotid artery occlusion, cranial nerve palsy, chiasmal infarction, intracranial aneurysm, fungal meningitis, and even death [1][7][8].

The early clinical signs of Mucormycosis include sinusitis, nasal discharge, and epistaxis. The hallmark of spread beyond the sinuses involve a characteristic black eschar over the skin over the orbit, palate, and nasal mucosa[4] . The eschar may propagate to the surrounding skin 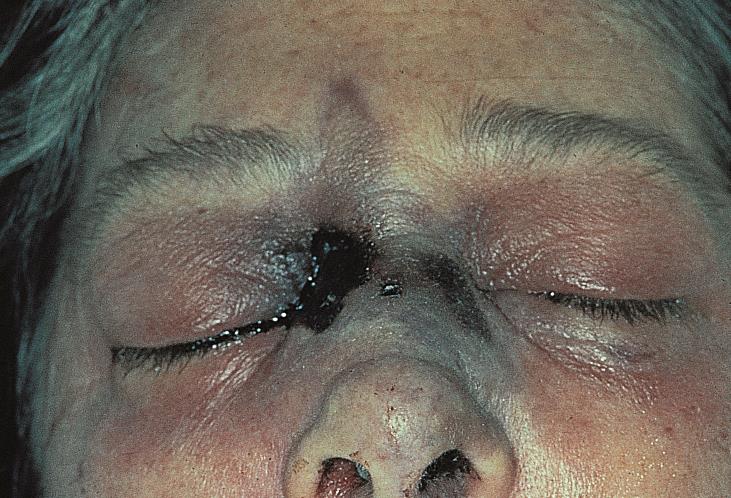 The maxillary and ethmoid sinuses are more frequently involved as evidenced on CT/MRI studies [7]. Initial external ophthalmic signs of ROCM may include the following [1][7]with ophthalmoplegia and proptosis being the most common eye signs reported [8] [9].

There can be occlusion of the central artery of the retina, or the branch retinal arteries which on funduscopic exam typically reveals opacification of the superficial retinal layers and the characteristic cherry-red spot on the macula[10]. Rarely, vision loss can also occur from infarction or direct fungal invasion of the optic nerve or chiasm [11][1].

Another manifestation of mucormycosis in the nasal-orbit area is a black eschar that may present in the nose mucosa or upper palate. Therefore, careful examination of these areas are advised when ROCM is suspected.

It is important to notice that because the fungus stays predominately intravascular, a CT scan without contrast may not reveal any lesion if no mass is formed, but may however show bone erosion if profound.

Imaging studies may include CT/MRI of orbit, brain, and sinuses demonstrate involvement of maxillary and ethmoid sinus, orbit, cavernous sinus, and less frequently involve the frontal and sphenoid sinus. In order to obtain a true diagnosis of mucormycosis, a fine needle aspiration biopsy of infected tissues must be obtained for histopathology and culture. Characteristic of this disease is aseptate hyphal elements that branch at right angles [12].

The most common areas to be involved are nasal cavity, maxillary sinus, ethmoid sinus, and orbit. [13]

This case is an example were Orbital mucormycosis extended to the orbit, optic nerve, near chiasm, and intracranial, partially seen with CT and best highlighted by MRI brain. Surgical approach was planned with the imaging: 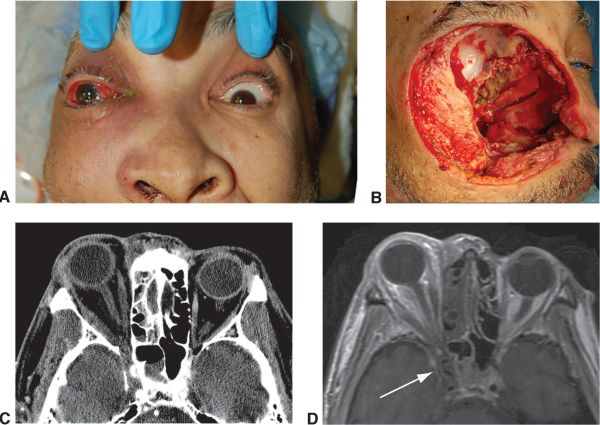 Some of the signs noted on a study of 43 patients with mucormycosis in the midface and skull base included: [15] 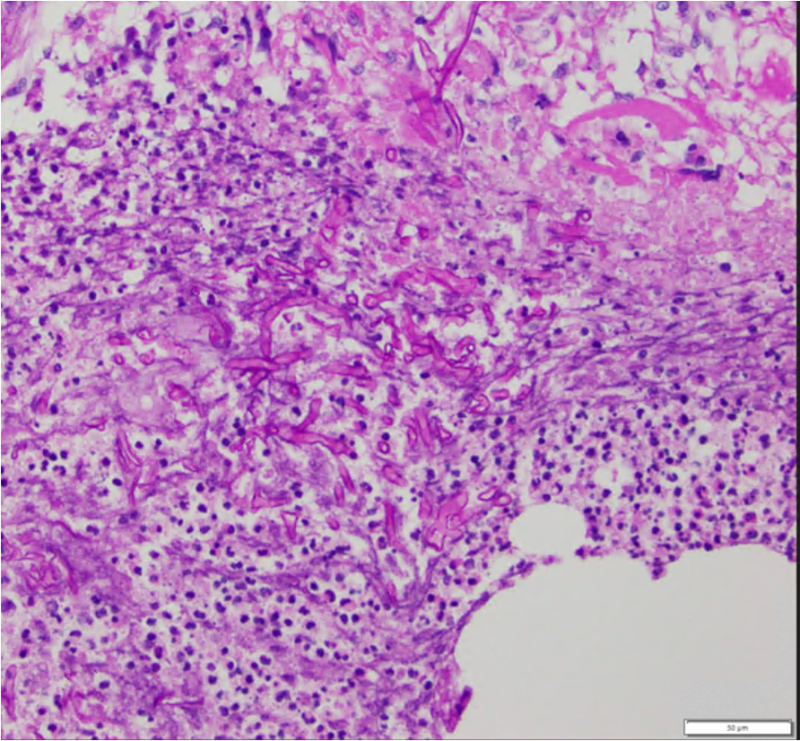 Ruling out another species of fungi, Aspergillus, is essential for diagnosis of ROCM. Circulating antigen detection test and 1,3 beta-D-glucan detection test cannot confirm the distinction between the Aspergillus and Rhizopus Oryzae. In conditions when tissue biopsy cannot be obtained due to patient conditions, samples such as sputum sample or even bronchoalveolar lavage may allow for delineation between the two [16]. Biopsy of the specimen will identify a 45 degree branching dichotomous (two symmetric almost equal branches) septate fungus as Apergillus.

The standard treatment for the early stages of ROCM is antifungal therapy and debridement (e.g., liposomal amphotericin B)[17], and if loca, it can be done endoscopically. Combination therapy of amphotericin with capsofungin has shown to be associated with better outcomes and can be considered [2].

As a general rule for the surgeon, the goal is to remove all necrotic tissue, and since necrotic tissue doesnt usually bleed, the surgeon is encouraged to debride until normal or profuse bleeding is obtained. [18]In the event of spread to the craniofacial tissues and the orbit, surgical treatment becomes essential. Because mucormycosis spreads through blood vessels and tissues, surgical debridement of infected sites is considered to avoid further complications.

The surgical approach may vary, but if orbit is invaded then exenteration with bone removal is needed. The extend of extraorbital excision may be guided by imaging (ie MRI). Once the infection is transformed to ROCM and has been demonstrating symptoms consistent with deep spread within the orbit, orbital exenteration may be considered to avoid the lethal spread to the vessels of the brain, such as the Circle of Willis.[19] See FIGURE 4 above. Liposomal amphotericin B can be continued throughout the surgical treatments [20].

Note: It is highly recommended for the surgeon to identify and label the margins excised during surgery, so that the pathologist can rule out/in existing invasion and confirm "healthy margins" remain.

The long-term outlook for patients with ROCM depends on the spread of the disease and the sites to which spreading has occurred. In terms of disease states, treating the mucormycosis disease and underlying immunosuppressive conditions are associated with better survival rates. In conducted studies in recent years, overall survival is 59.5% with treatment and only 21% without[21]. Factors associated with poor prognosis include: [8].