Treatment of fungal ulcers is one of the most challenging tasks in treating corneal infections. The incidence of fungal keratitis is higher in developing countries as compared to developed countries, with Aspergillus being the most common species isolated worldwide. Fungal ulcers typically involve the deep stroma, and topical medications are larger molecules that have poor stromal penetration. Therefore, direct drug delivery system in the form of intrastromal injections are helpful in the management of these deep recalcitrant fungal ulcers. Commonly used antifungal drugs for intrastromal injections include voriconazole, amphotericin B , fluconazole and natamycin.

Azoles act on fungal cytochrome P450 enzymes by blocking the synthesis of ergosterol in the plasma membrane, thus inhibiting fungal growth. Azoles are divided into two major classes - imidazoles were the first to be introduced, followed by triazoles. Both have similar antifungal spectra, but triazoles have the advantages of being metabolized more slowly and exerting less influence on the metabolism of steroids in humans . These drugs are metabolized primarily in the liver, therefore control of liver enzymes is recommended. They have teratogenic activity (class C) and should not be used during pregnancy. The imidazoles used more often include miconazole ,econazole and ketoconazole. Among the first-generation triazoles, the most commonly used are itraconazole and fluconazole. Second-generation triazoles were introduced into clinical practice in the past decade and include voriconazole and posaconazole. 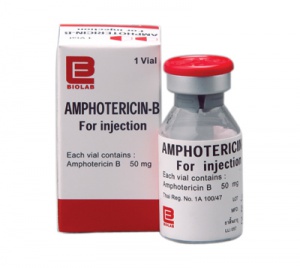 AMB belongs to the family of polyene macrolide antibiotics and was the first broad-spectrum antifungal agent to be discovered. Isolated in the 1950s, AMB is produced by the actinomycete Streptomyces nodosus and became popular after approval by the FDA in the 1960s due to its great efficiency in controlling disseminated fungal infections.[1]

AMB acts by increasing cell permeability through the formation of pores in the fungal cell membrane by binding to ergosterol and by promoting oxidative action on cells, thus altering their metabolic functions.

Amphotericin derives its name from its amphoteric properties and is effective in both extremes of acidic and basic Ph. It has low water solubility and needs to be diluted in deoxycholate for administration. It is photo- and thermosensitive and should be stored in a dark and refrigerated place (2-8°C).[1][2]

AMB acts on both yeasts and filamentous fungi. It has an excellent spectrum, being effective against Candida., Aspergillus sp, Penicillium marneffei and to a lesser extent, against Fusarium species.[1]

Intrastromal injections of amphotericin B in humans have not shown any toxicity. However, in animal models concentration of amphotericin B above 20ug/0.1 ml caused corneal edema, epithelial erosions and neovascularization.[3]

Voriconazole acts by inhibiting the synthesis of ergosterol and is much more effective than 1st generation triazoles.

Effective in the treatment of keratitis by Candida, Aspergillus, Fusarium, Scedosporium and Paecilomyces[4][5]

Its advantages compared to polyenes include its greater stability to light and temperature, remaining effective for up to 30 days.[6][7] 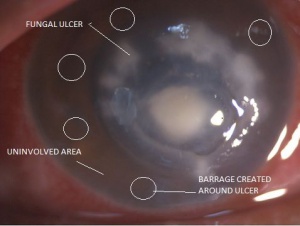 Intrastromal injections can be given under topical or peribulbar anesthesia. Under full aseptic conditions, the preloaded drug should be administered under an operating microscope. The bevel down, the needle is inserted obliquely from the uninvolved area to just reach the abscess at mid-stromal level which is the intended area of drug deposition . The drug then is injected and the amount of hydration of the cornea is used as a guide to assess the area covered. Once the desired amount of hydration is achieved, the plunger is withdrawn slightly to ensure discontinuation of the capillary column and thus prevent back-leakage of the drug. Five divided doses are given around the abscess to form a deposit of the drug around the circumference of the lesion. This is done in a way that a centripetally directed progressive wave of fluid appears to encompass the abscess along each meridian. Circumferential injection will ensure the formation of a barrage of intrastromal drug around the entire abscess.[8] Most studies show that at least 2 more injections must be given to obtain an optimal response. [9]

Several small studies have evaluated the use of intrastromal voriconazole for patients not responsive to topical medications. One study looked at 25 patients not responding to topical Natamycin and Voriconazole. 72% of these patients responded to intrastromal injections of Voriconazole and 15% of these patients needed more than one injection.[10] Of those patients non responsive, the majority were culture positive for Fusarium. Another study looked at 12 patients, of which 10 resolved after injections. Of the two failures, one was positive for Aspergillus and the other Fusarium.[8] An additional study evaluated 20 patients, of which 14 responded to injections.[11] This cohor required an average of 2.65 injections. In these studies, the patients who did not respond required tectonic keratoplasty.

Thus, intrastomal injections are safe and effective way for the treatment of deep and recalcitrant fungal ulcers. The number and interval of injections still needs further evaluation.