Sagging eye syndrome (SES) was first described by Rutar and Demer in 2009, as a potential leading cause of strabismus in older adult population as a combination of horizontal and vertical strabismus in addition to bilateral blepharoptosis (ptosis with high lid creases) and deepening of the sulcus.[1]SES should be differentiated from heavy eye syndrome (HES) which is an association of axial high myopia, esotropia, and hypotropia.[2] In a recent study by Goseki et.al.[3], from 945 patients complaining of double vision, majority of patients between 60 and 80 years, approx 31% had SES and were older, ~71 years old, with ~60% female predominance. Interestingly, they found that the relative proportion of SES was just 4.7% in patients younger than 50 years but it increased to 60.9% in patients older than 90. The cyclotorsion component of SES was present in 65% of patients.

Extraocular muscles (EOM) are surrounded by connective tissue that serve as a functional support and a mechanical pulley. The mechanical properties of pulleys are critical for the support and rotational properties of the eye. Histologic studies showed that each rectus pulley consists of an encircling ring of collagen located near the globe equator in tenon fascia, coupled to the orbital wall, adjacent EOMs, and equatorial Tenon fascia by bands containing densely woven collagen, elastin, and smooth muscle.[4]The pulleys inflect rectus and inferior oblique paths by the exact same way that the trochlea inflects the path of the superior oblique (SO) tendon. The global layer of each rectus EOM, passes through the pulley and becomes contiguous with the tendon to insert on the globe. The orbital layer, inserts on the pulley, not on the globe.[4]A dense band iss present from the medial rectus to the inferior pulleys (MR–IR band) and from the medial rectus to the superior rectus pulleys (MR–SR band). Similarly, another dense band is found from the Superior rectus to the lateral rectus pulleys (LR–SR band).

The LR-SR band vertically supports the LR pulley against the downward force of the inferior oblique muscle to maintain the LR pulley’s vertical position. However, age-associated degeneration of the ligaments interconnecting the EOM pulleys permits inferior sag of the LR pulley, causing esotropia, cyclovertical strabismus, or both.[5]

There has been an increased awareness and diagnosis of these degenerative strabismic disorders after 2000.[7] The typical presentation in an older individual is one of gradual or subacute onset of diplopia. Per some observations, its is more common in Caucasian females.[5] Initially, most patients only notice intermittent binocular diplopia at long distances, such as in the theater or while driving. Over a period of several months, the diplopia becomes more constant and is noticed while driving, watching television, and in other long-distance vision situations. Typically, patients note that they do not have any diplopia at near. The remainder of the neurological examination should be normal, without any cranial neuropathies. Patients may also present with ductional deficits depending on the grade of muscle displacement.[5] In addition, patients may have had eyelid surgery, face lifting,[6] or even apparently uncomplicated refractive or cataract surgery.[6][8]

The use of MRI imaging is confirmatory rather than "required" to make the diagnosis, since diagnosis is mainly clinical. Chaudhuri and Demer used MRI to evaluate rectus EOMs, pulleys, and the LR-superior rectus (SR) band ligament in SES. Magnetic resonance imaging resolution showed superotemporal bowing of the LR-SR band in milder cases and abrupt termination of an attenuated band remnant in the superolateral orbit in more severe cases.[5] The ligament was ruptured in 64% of orbits with DPE and 91% of orbits with CVS. Also found significant displacement of all four rectus pulleys away from the orbital center, lateral displacement of the inferior rectus pulley and obliquely angulated lateral rectus pulley.[5]

MRI measurements of horizontal EOM lengths in SES were approximately 40%, or 14 mm, longer than the EOMs of nonstrabismic younger and older controls.[5]

In recent imaging studies, Patel et al. enlisted 100 patients without strabismus, and readers graded the LR-SR band visible in 95% of orbits on non-fat-suppressed coronal T1-weighted sequences, 68% on coronal STIR sequences. Typically, the band appears as an uninterrupted, arc-like structure extending from the lateral rectus to the superior rectus/levator palpebrae complex. Of note among this cohort of patients without strabismus, noncontinuous LR-SR bands were found in 5% of cases, and superotemporal bowing in 24% of cases. Results from this study also supported previously published evidence of normal age-related connective tissue degeneration as there was a positive age effect in correlation to supero-temporal bowing of the LR-SR band.[9] 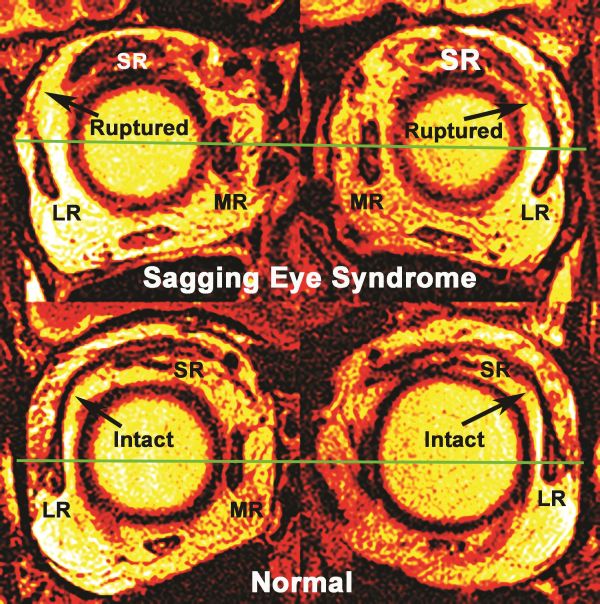 Differentiating sagging eye syndrome (SES) from other causes of strabismus is not always a straight forward task given that patients with SES may have risk factors for strokes or tumors. Usually the sensorimotor exam is helpful, as in SES the misalignment does not map similar to cranial nerve palsies or skew deviation. In addition, patients with SES usually have normal horizontal saccades and normal horizontal ductions. The differential includes:

It can be difficult to adjudicate small angle deviations such as HES and SES from mild myasthenia gravis, incompletely resolved sixth nerve palsy, thyroid eye disease, and decompensated prior phorias. Depending on the clinical circumstances, the imaging, and the course, clinicians should consider evaluating for other etiologies prior to making the diagnosis of HES or SES.

Since most of the patients have good fusional capacities they do not experience double vision for near with that said these patient can likely manage without the need for intervention.

Sagging eye syndrome rarely gives a deviation of more than 10 PD (Prisms Deviation) [5]. In spectacle-dependent patients, a temporary Fresnel prism or permanent ground in prism are usually helpful in managing the double vision for distance without inducing diplopia for near given their strong near fusional capacities as mentioned before. When patients are spectacle independent and want to remain independent, surgical approach could be offered.

Patients with sagging eye syndrome can be treated surgically if they do not respond to or do not desire prism therapy. Different surgical approaches exist when dealing with the components of sagging eye syndrome including divergence insufficiency esotropia and cyclovertical strabismus. A recent review in January 2020 supported the evidence that when the symptoms of diplopia are burdensome to the patient, surgery is the only treatment that can eliminate the misalignment almost 100%. In that study, strabismus surgery was performed in 50% of all SES cases. It was found that the mean distance-esotropia deviation in Prism was 6.9 ± 0.7 and it resolved to 0.3 ± 0.3 after surgery, while mean vertical deviation went from 3.0 ± 0.3 to 0.7 ± 0.2.

In 2005 Thacker NM et al. published a case series of long-term follow up for 29 patients with divergence insufficiency esotropia underwent lateral rectus resection. Their patients all had satisfactory results, with no patients initially over-corrected or requiring additional prisms. However, they had a recurrence rate of almost 7% over their mean follow-up period of 39 months.[10] In 2013, Stager et al. reported a series of 57 patients underwent unilateral lateral rectus resection for distance esotropia deviations of 5–30Δ with 96.5 % did not require further surgery.[11]

Bothun and Archer reported a series of 8 patients who underwent bilateral medial rectus recessions for distance esotropias of 12–35Δ; 5 patients had satisfactory results with collapse of the distance-near deviation from 15Δ pre-operatively to 5Δ postoperatively.[12]Later Chaudhuri and Demer reported 24 patients and compared the results of those undergoing lateral rectus resection (n = 8) to those undergoing medial rectus recession (n = 16). They concluded that medial rectus recession is as effective as lateral rectus resection and suggested that double the distance angle of esotropia should be used as the surgical target.[13]In their case series patients with lateral incomitance, the adjustable suture was generally placed on the MR opposite the horizontal direction of the greatest ET.

Chang MY et al. reported a case series of 9 patients with vertical strabismus incomitant in horizontal gaze positions and cyclotorsion who underwent Adjustable small-incision selective tenotomy and plication. 8 (89%) had successful with postoperative vertical alignment and 4 (50%) were successfully corrected, with <5° of cyclotorsion postoperatively. They concluded that these surgeries are less effective for correcting cyclotorsion in patients with restriction or prior strabismus surgery.[14]

In 2015 Chaudhuri and Demer published a retrospective observational study about utilizing Graded Vertical Rectus Tenotomy (GVRT) for treating incomitant vertical misalignment. The procedure is performed under topical anesthesia in the presence of an anesthesiologist. Initial tenotomy 30% of tendon width was performed to avoid intraoperative overcorrection. Surgical effect was assessed immediately by sitting the patient up and repeating the measurements at near and distance. If hypertropia persisted, further 5%–10% increments of GVRT up to a maximum of 90% were added with monitoring of alignment. The inferior rectus (IR) was chosen when hypertropia was vertically concomitant or greatest in infraversion. The SR was chosen when hypertropia was greatest in sursumversion or absent in infraversion. Temporal GVRT was chosen for the IR and nasal GVRT for the SR. They concluded that GVRT performed with intraoperative monitoring under topical anaesthesia, precise correction of hypertropia up to 10Δ can be achievable.[15]Linear regression analysis of hypertropia correction with tenotomy showed that for a 3–6Δ hypertropia, a 30–90% tenotomy is recommended. In this study, they reiterate that a topical anesthesia with intra-operative re-assessment of deviation[15].

Due to the degenerative etiology of this syndrome, the connective tissue involution may progress after surgery, up to 20% of patients[15], therefore is important to inform the patient of this possibility prior to surgery.