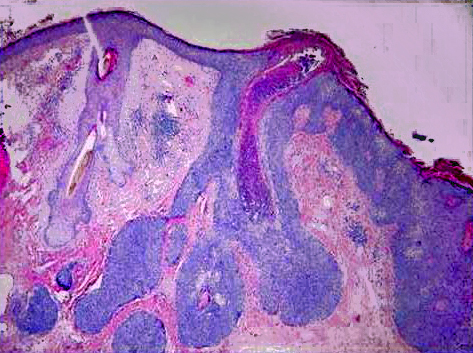 Sebaceous carcinoma of the upper eyelid originating from the glands of Zeis. A normal pilosebaceous unit is seen to the left of the lesion. Image courtesy of Marcus M. Marcet, MD FACS cc-by-sa-3.0.
ICD-10
[1]44
MeSH
D012626

Sebaceous carcinoma is a rare, highly malignant, and potentially lethal tumor of the skin, which most commonly occurs in the eyelid. The neoplasm arises from sebaceous glands, such as those of the meibomian glands in the tarsus, the Zeis glands of the eyelashes, the caruncle, and the skin of the eyebrow. The lesion occurs more often in the upper eyelid, most likely due to the presence of a greater number of meibomian glands (~50 glands in upper eyelids, ~25 in lower).

Sebaceous carcinoma can also occur in other body areas in 25% of cases including other areas of the head and neck and other areas of skin with hair, even genitalia [1].

A review of 5504 eyelid skin tumors by a single ophthalmologist in Switzerland from 1989-2007 showed the following:

The condition occurs more frequently in females. The upper eyelid accounts for the majority of cases. Older age is risk factor, as the reported median age at presentation has ranged between 57 and 72 years. However, tumors can arise in younger individuals who have been treated with periocular irradiation. The tumor has a higher incidence in Asia compared with North America. [1]

A high index of suspicion is critical for the diagnosis of sebaceous carcinoma. Clinical suspicion should be higher when a patient has an atypical presentation of a typical diagnosis. For example: atypical or recurrent chalazia in the upper lid, yellow thickening of the eyelid, keratoconjunctivitis or blepharoconjunctivitis unresponsive to treatment, or persistent blepharitis.

Sebaceous carcinoma is yellow in appearance (from the lipid within the neoplastic cells). It arises at the sebaceous glands, usually at the lid margin and can extend to the palpebral conjunctiva. Therefore, it is important to evert the lid, as seen in the third picture below.

One of the hallmark features of sebaceous carcinoma is pagetoid spread--spreading of malignant cells to epithelium that appears to be separate from main tumor. Therefore, it is important to obtain a wide excisional biopsy of the primary lesion and map biopsies of the conjunctiva (including the palpebral conjunctiva in both lids and 4 quadrants of the bulbar conjunctiva). It is important to mark the margins when submitting a specimen to pathology. Communicate with the pathologist the importance of evaluating the margins for disease.

The histopathology varies depending on the differentiation of the tumor. In well differentiated lesions, there is a lobular arrangement and vacuolization of the cytoplasm cells centrally.

The differential diagnosis includes any benign or malignant condition of the eyelid skin, including:

The mainstay of treatment is surgical excision. It is important to ensure a full thickness specimen, obtain map biopsies of the conjunctiva. If invasive, orbital exeteration may be indicated. Staging is assessed using the TNM definitions as provided by the American Joint Committee on Cancer recommendations. Sentinel lymph node biopsies can be obtained. According to the AJCC "it seems reasonable to recommend sentinel lymph node biopsy or at least strict regional lymph node surveillance for patients with sebaceous carcinoma of the eyelid who have T category of T2b or worse or tumors of 10mm or more in greatest dimension." [5]

Mohs micrographic surgery is an effective treatment for sebaceous carcinoma. Detailed history taking, age-appropriate cancer screening, and immunohistochemical staining with MLH1, MSH2, or MSH6 is helpful in identifying which patients should be referred to a geneticist for work-up of MTS.[6]

Wide local excision may also considered in some cases. When sebaceous cell carcinoma invades the orbit, exenteration may be considered. This is especially true for large, deeply invasive lesions, or significant bulbar conjunctival involvement. 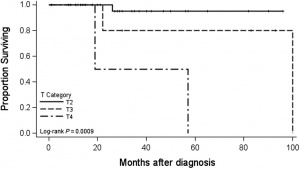 Graph showing disease-sepcific survival as a function of T category. [5]

Sebaceous carcinoma can recur in up to 33% of the cases.

According to the American Joint Committee on Cancer, T category of T2b or worse correlated with regional lymph node mets. [5] Metastasis can occur in about 25% of cases. [1]