Senile Retinoschisis is a microcystoid degeneration of the neurosensory retina, with splitting at the outer plexiform layer of the retina.

As above, this is a microcystoid degeneration of the neurosensory retina, with splitting at the outer plexiform layer of the retina.

Most patients are asymptomatic and this is an incidental finding. These patients may be referred to the retinal specialist with the presumptive diagnosis of retinal detachment. 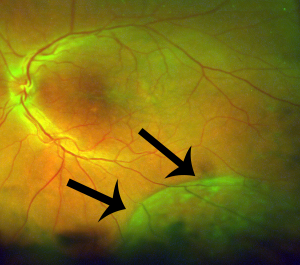 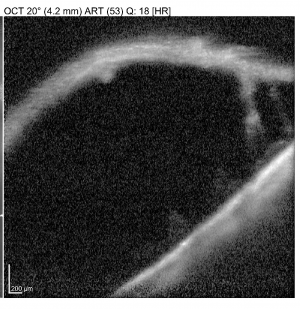 Senile retinoschisis is usually benign but complications include:

The natural history is that this disease rarely progresses from where it's first observed, so resist lasering: most cases of posterior retinoschisis will not progress beyond 3 disc diameters from the macula and only a handful of cases of degenerative retinoschisis involving the macula have been reported. Additionally, no treatment, including laser, has been shown to halt the progression of retinoschisis.

Although approximately three-quarters of lesions will have their most posterior extent postequatorial, only about three percent will progress posteriorly, so most still can be observed.[1]     Neither cataract surgery nor PVD have any adverse effect on retinoschisis because pathology is within the retina and not at the vitreoretinal interface.

Outer wall breaks have a 10-27% incidence and usually can be observed. Schisis detachments may develop in a small (<10%) of eyes with schisis.  This occurs when schisis fluid accumulates in the subretinal space slowly though an outer wall break. These breaks  are usually large, >3 disc diameters (DD), round, and posterior, with rolled edges. A ring of pigmentation at the border of the detachment indicates chronicity. In addition, subretinal fluid (SRF) typically doesn't extend past the walls of schisis (viscous intraschisis fluid with mucopolysaccharides transmits slowly).

Most series note that approximately half of RS with outer wall breaks will remain stable, and half will progress to schisis detachment.[1][2] Laser demarcation or cryotherapy when posterior margin is anterior enough has been demonstrated effective at preventing progression in the majority of patients.[2] Also, scatter photocoagulation to the entire bed of the schisis cavity has been noted to aid collapse of the cavity.[3] One must note that although patients may be asymptomatic at the time of intervention, the decision to intervene often is due to the more posterior extent of the detachment, and retinopexy to the posterior border may introduce scotomata that may be now symptomatic for the patient. Additionally, while rare, potential side effects of retinopexy include intraocular inflammation, retinal breaks, and epiretinal membrane formation.

Progressive RRD results from breaks in both inner and outer layer of breaks, allowing liquified vitreous to enter the subretinal space. These inner wall breaks may occur from acute PVD and vitreous traction. However, they may be spontaneous and are often small and not easily visualized.

It's important to note that the patient may be asymptomatic due to the absolute scotoma in senile retinoschisis, even in the presence of an RRD. However, detachments  are still very rare (occur in 0.05% of patients with retinoschisis). Treatment only needs to close the inner retinal break (can leave outer retinal break). The schisis cavity will likely recur, and they will have an absolute scotoma even if it does not.

A variety of approaches have been reported with success, including laser retinopexy, cryoretinopexy, pneumatic retinopexy, scleral buckling, and pars plana vitrectomy (PPV) with a variety of endotamponades.[3][4] [5] [6] The PPVs have noted success with or without scleral buckling (SB) and with or without unroofing of the schisis cavity. Vitrectomy is better for posteriorly located outer wall breaks and PVD, whereas SB) can be tried for anterior outer wall breaks and absence of PVD Single surgery anatomic success (SSAS) has been reported to be highest with combined SB/PPV, although given the small case rate in most series, surgery should be tailored to the patients presentation. Additionally, unroofing of the schisis inner layer has been advocated to ensure complete removal of residual vitreous traction, as PVD may not be complete in many cases. No visual field impact will be had with inner layer excision as RS already results in an absolute scotoma.

The choice of approach should be guided by the location and size of the RS cavity, the number of OLH, presence of proliferative vitreoretinopathy (PVR), and present of PVD.

As above, you may consider vitrectomy or a scleral buckle in cases with retinal detachments and inner and outer retinal breaks. However, due to the rarity of progressive schisis detachments, there is no consensus on appropriate intervention, and surgical approach varies based on the anatomy and configuration of the detachment.

As above, extension into the posterior pole, and outer and inner breaks leading to retinal detachment are possible but unlikely.

Most people with senile retinoschisis do well and can be followed without intervention. Follow up on progressive rhegmatogenous retinal detachment is needed and surgicanl intervention is considered when it is progressive.