SC is a rare clinical entity causing less than 5% of posterior uveitis cases. It has a higher prevalence in men and affects young to middle-aged adults. No systemic disease associations have been identified. [4]

Although of unknown etiology, its origin is probably immunogenic since it seems to respond to treatment with corticosteroids and other immunosuppressants. Moreover, affected patients also show an increased frequency of HLA-B7 and retinal S-antigen associations. Other pathogenic mechanisms have been proposed and there may be an association with SC with infectious etiologies such as Mycobacterium tuberculosis and herpes viruses but this remains to be proven. Alternatively, SC and tuberculosis-related SC may be different disease entities with overlapping features. [5]

SC presents with gray-yellowish subretinal infiltrates that usually spread centrifugally from the peripapillary region in a serpiginous (snake-like) manner. Active lesions show a leading edge and resolve with subsequent RPE and choriocapillary atrophy. Consecutive recurrences cause further atrophy leaving hypo- and hyper-pigmented lesions that spread irregularly over the posterior fundus. Although bilateral, the disease is often asymmetric with multiple lesions in different stages of resolution in both eyes. Recurrences have variable intervals that range from months to years. Anterior chamber and vitritis are minimal. [4] 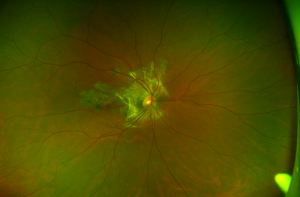 Widefield pseudocolor fundus photograph of a patient with serpiginous choroidopathy. 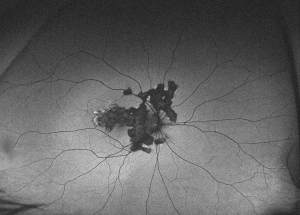 Widefield fundus autofluorescence of the above patient with serpiginous choroidopathy. There is a hyperautofluorescent border at the temporal border of the lesion indicating active inflammation.

TB has recently been associated with the development of a choroidopathy that mimics SC commonly named serpiginous-like choroidopathy (SLC).[7] This disease probably represents a hypersensitivity reaction to Mycobacterium tuberculosis infection, which leads to the development of a chorioretinitis that is similar to SC. This poses a diagnostic challenge since these two disease entities have a very different therapeutic approach and antibacillary treatment associated with oral corticosteroids is mandatory for SLC in order to avoid future recurrences. Recent works claim that SLC can be distinguished from SC because the lesions are noncontiguous to the optic disc, are frequently multifocal with a more peripheral involvement, tend to spare the fovea even in eyes with macular involvement and commonly course with vitritis. SLC may not respond to sole treatment with steroids and/or other immunosuppressants making TB testing (with tuberculin skin testing or QuantiFERON-TB Gold) mandatory, especially in a patient from endemic regions.

Treatment of SC aims to stop chorioretinal inflammation especially when the advancing lesions threaten the fovea. Systemic or periocular corticosteroids are frequently used but recurrence prevention usually requires long term anti-inflammatory treatment with a steroid-sparing agent, such as antimetabolites (methotrexate, mycophenolate mofetil, azathioprine), cyclosporine A, or anti-TNF agents, such as adalimumab or infliximab, once tuberculosis has been ruled out.[8] Long term management can be challenging and up to 25% of the eyes have a final visual acuity less than 20/200.

SC is a challenging disease, likely autoimmune in origin and frequently managed with systemic corticosteroids and other immunosuppressants. Tuberculosis testing is critical in this setting since SLC has a different therapeutic approach and clinical course.