Child abuse is a significant social problem which is associated with a high morbidity and mortality. “Shaken Baby Syndrome” (SBS) is one form of physical child abuse, a non-accidental traumatic (NAT) brain injury. It is included in abusive head trauma classification. [1]. In 6% of reported cases of child abuse, an ophthalmologist is responsible for initially recognizing the abuse[2]. Shaken Baby Syndrome (SBS) affects an estimated 1400 children/year in the United States [3] and it is thought an astounding 2 million children are abused each year in the US alone. Retinal findings may be the only manifestation of this abuse. It is a diagnosis that has important medical-legal implications and one that cannot be overlooked as a child’s safety may very well be at stake.

The ocular manifestations of child abuse are numerous. There may be signs of periorbital trauma (i.e. ecchymosis, lid edema, orbital fractures), anterior segment trauma (i.e. hyphema, iris prolapse, corneal laceration, cataract), or posterior segment trauma (i.e. vitreous hemorrhage, retinal detachment, optic nerve avulsion)[4]. There may be associated brain injury resulting in nystagmus, cortical blindness, encephalopathy, or cranial nerve palsies[4]. Intracranial bleeding may be associated with SBS[4] - most commonly subdural hemorrhage.
Retinal hemorrhages are the cardinal manifestation of SBS. The incidence of retinal hemorrhages in SBS is approximately 85%[5]. Classically, children with SBS have retinal hemorrhages which are multilayered – preretinal, intraretinal, and subretinal. They are usually too numerous to count and extend out to the retinal periphery (i.e. not just confined to the posterior pole). Macular retinoschisis (splitting of the retinal layers) may also be associated with SBS[6]. As retinal hemorrhages may subside over time, prompt retinal photography is recommended at the time of discovery of retinal hemorrhages on dilated funduscopic exam to document findings as a baseline for future comparison. If possible, extended ophthalmoscopy with examination of the entire retina with scleral depression is recommended to also evaluate for peripheral nonperfusion (from retinal vascular disruptions) and neovascularization as well as for peripheral retinal tears, hemorrhages, and other pathology. If possible, wide sweeping photographs and fluorescein angiography are recommended as soon as the discovery of retinal hemorrhages from SBS / NAT are discovered. Examination under anesthesia may be required to obtain imaging as well as administer treatment. 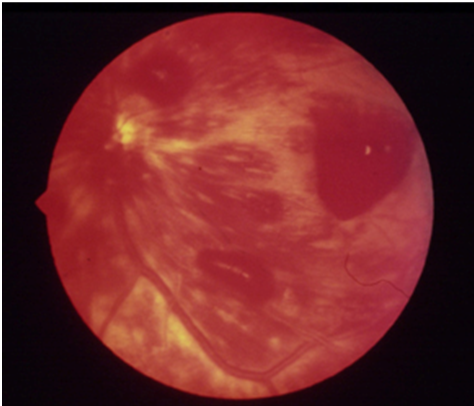 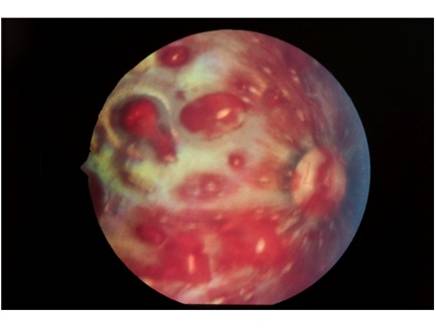 Perhaps the greatest diagnostic clue is a detailed history that is incompatible with the extent and severity of the injuries found on dilated fundus exam. Suspected abusers may confess to investigators in up to 47% of cases[7]. A child with classic evidence supporting physical abuse (i.e. old fractures, bruises of varying ages, signs of neglect, new sleep or behavioral issues) should alert the clinician to request a dilated fundus exam looking for SBS. The actual cause of retinal hemorrhages is still being studied experimentally. 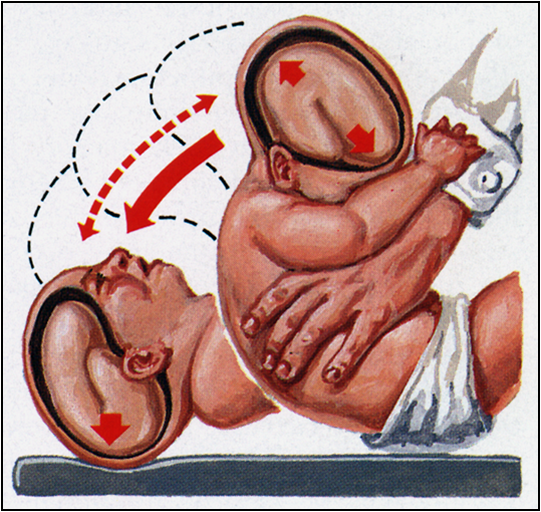 Several mechanisms for the retinal hemorrhages have been postulated and recently been the subject of some debate (mostly in the courts). One likely hypothesis implicates repetitive acceleration-deceleration forces which cause damage via vitreomacular traction[8]. Other possible mechanisms include blunt head impact, increased intracranial pressure, increased intrathoracic pressure, hypoxia, sodium imbalance, or coagulopathies. Vascular disruption may also lead to peripheral nonperfusion which subsequently may result in neovascularization, vitreous hemorrhage, and tractional or combined tractional / rhegmatogenous retinal detachment.

Pathology may reveal findings detailed above (e.g. retinal hemorrhages at multiple levels, nerve avulsion). Perimacular folds and hemorrhagic macular retinoschisis may be found on histopathologic exam and may not be well appreciated on dilated fundus exam if the view is obstructed by vitreous hemorrhage.

Overall, prevention is the best therapy. Many hospitals and healthcare centers offer classes and education on how to cope with the stresses of parenthood. Unfortunately, some children will require treatment for amblyopia or strabismus. Patching therapy and glasses may be needed to treat the amblyopia induced by the ocular trauma.

Surgical vitrectomy may rarely be needed for nonclearing vitreous hemorrhage, macular hole, or retinal detachment. Often, the prognosis can vary significantly for victims of SBS depending on the severity of the trauma. Careful physician documentation of findings and fundus photography (if available) can prove very helpful especially in a court of law. Child protective services and local law enforcement should immediately be alerted in all cases of abuse or suspected abuse.

Poor. Cortical blindness occurs in up to 15%. Victims suffer from high incidences of behavioral, social, motor, and visual problems.