Solar retinopathy (also known as, photic retinopathy, foveomacular retinitis, solar retinitis, and eclipse retinopathy) refers to a photochemical toxicity and resultant injury to retinal tissues, usually occurring at the fovea. This entity is commonly associated with sungazing or eclipse viewing, and often results in mild-to-moderate visual acuity deficit and/or central or paracentral scotomata. Recovery is spontaneous in nature and occurs over the course of 3-6 months after the inciting event, though visual recovery may be incomplete and patient may suffer from permanent visual acuity deficits and central or paracentral scotomata.

Solar (or photic) retinopathy refers to a pathophysiologic entity causing visual disturbance sustained during or after prolonged or high intensity exposure of the foveomacular retinal tissue to light energy.

The disease entity has been recognized, to some degree since the times of Classical Greece[1]. While this disease process is classically associated with sungazing and eclipse viewing, a number of reports have found phototoxic foveomaculopathy to occur secondary to a myriad of other mechanisms, including from welding, ophthalmic operating microscopes[2][3], endoillumination techniques utilized during vitreoretinal surgeries[4], occupational hazards such as welding arcs[5] and laser pointers[6], and even photographical illumination mechanisms[7].

Aside from sustained or high-intensity light exposure, common factors predisposing patients to phototoxic injury to the retina include[8]:

Protective factors include the following[8]:

Histopathalogic analysis of rhesus monkey retinae after prolonged light exposure helped characterize the histopathologic changes observed in solar other photoxic retinopathies. As early as day 2 post-exposure, major changes were observed mainly in and about the retinal pigmented epithelium (RPE). RPE disruption was evident throughout the exposed area, sometimes associated with choroidal damage. Pigmentary changes of the RPE were noted as macrophages were observed engulfing melanosomes in the subretinal space. Resolution of these findings can be seen by 10 days after injury.[9]

In 1993, ultrastructural pathologic changes of solar retinopathy were explored by Hope-Ross, et al., who had the cooperation of a 65-year-old man scheduled for enucleation for choroidal melanoma.[10] The patient agreed to stare into the sun 6 days prior to enucleation. Findings included photoreceptor changes including vesiculation and fragmentation of photoreceptor lamellae, presence of whirls within disc membranes, mitochondrial swelling and nuclear pyknosis. Retinal pigment epithelial cells in the affected area showed plasma membrane changes, smooth endoplasmic reticulum swelling, and changes in lipofuscin granule structure.[10]

The mechanism by which retinal tissue damage occurs in solar retinopathy is photomechanical in nature. Photochemical retinal injury is believed to be a product of free radical formation. Two mechanisms of free radical formation have been proposed. First, absorption of light energy by a molecule causes an electron to enter an “excitation state”, with free radical formation being a means by which such an electron can return to the “ground state” energy level. In returning to the “ground state” energy level, an excited state electron splits a bond within another molecule, forming a free radical.[11] Second, light energy absorption can cause excitation of and direct transfer of energy from an intraretinal chromophore – flavoproteins, heme proteins, melanosomes, lipofuscin, and photoreceptors themselves – to oxygen, creating a reactive oxygen species.[11] Furthermore, the photochemical injury to the retinal tissues may be thermally enhanced[6].

Diagnosis is made based on history and examination findings including physical/biomicroscopic examination of the fundus, as well as diagnostic imaging, such as FA, OCT, or fundus autofluorescence.

Obtaining a good history is important for making a clinical diagnosis of solar or photic retinopathy. Sungazing, eclipse viewing, occupational hazards such as welding without a welding helmet or welding goggles, exposure to lasers or laser pointers, or recent cataract extraction or other ophthalmologic operative procedures may be endorsed by the patient or may require pointed interrogation. Furthermore, cognizance on the part of the ophthalmologist of solar and other astronomical phenomena, such as solar eclipse, may aid in teasing out pertinent history from patients that raise suspicion for solar retinopathy.

Symptoms commonly present within hours of exposure and include blurry vision and central or paracentral blind spot in one, or more commonly, both eyes. Additional complaints may include dyschromatopsia, metamorphopsia, micropsia, frontotemporal headache

A full 8-point examination should be performed on all patients presenting with visual complaints.

Fundus biomicroscopic changes tend to be bilateral, however mild cases may show no fundus abnormalities whatsoever. More moderate to severe cases show dynamic fundus changes. In the first few days after injury, the fundus may display a yellow-white spot at the fovea. Subsequently, this spot may be seen to take on a more reddish hue. This red spot is often surrounded by a halo of pigment. Approximately 2-3 weeks after the injury, a small 100-200 µm lamellar hole or foveal depression can be seen. [8]

OCT of a patient diagnosed with solar retinopathy illustrated changes and focal disruption at the level of the sub-foveal RPE and outer retinal bands with an otherwise normal retinal architecture and contour. Focality of changes in the outer retinal is a common trait of this condition. When the patient is examined very early (within a week), OCT shows hyperreflective focal area at the center of the fovea involving mostly the outer retina (but can rarely involve full thickness of the retina).

Punctate RPE transmission or window defects may be seen in fluorescein angiography due to the damage to the underlying RPE. However, these findings are not consistently seen in all cases of solar retinopathy. On fundus autofluorescence, one may notice a well-circumscribed, hypoautofluorescent central area surrounded by a ring of hyperautofluorescence. 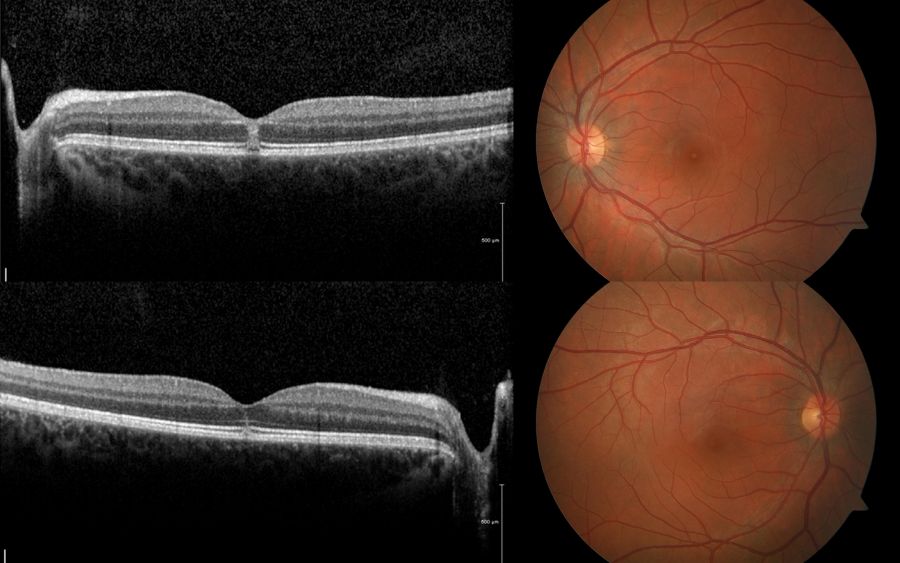 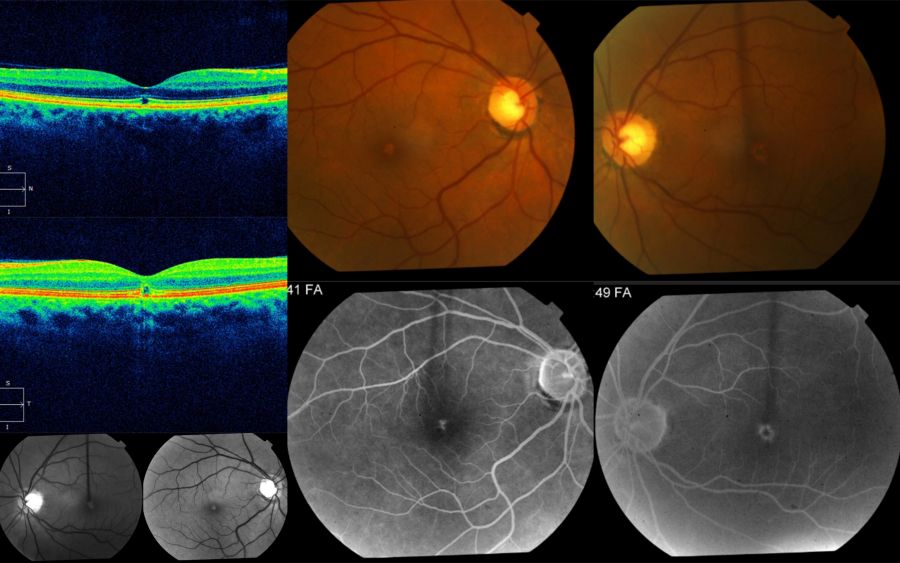 A 50-year-old woman was referred for evaluation of a maculopathy. She had a history of hallucinations and a seizure disorder. After examination, she admitted to repeatedly starring at the sun for long periods of time. Her visual acuities measured 20/20 and 20/30 right and left respectively. Macular examination revealed mild atrophy central on the right. On the left, macular examination revealed central pigment clumping with surrounding atrophy. Angiography revealed staining centrally OD and blockage by the central pigment clumping with staining of surrounding atrophy OS only. OCT revealed symmetric focal discontinuity of the subfoveal IS/OS line and underlying RPE. “This image was originally published in the Retina Image Bank® website. Author Thomas A. Ciulla, MD, MBA. Photographer Thomas Steele. Title Solar Maculopathy. Retina Image Bank. Year 2015; Image Number 24822-30. © the American Society of Retina Specialists." https://imagebank.asrs.org/case/2183/solar-maculopathy This is a collage of multiple separately published images.

No known beneficial treatment exists for solar retinopathy, although entities such as steroids have been tried without consistent evidence of effectivness. Prevention is through education is paramount.

Regular follow-up through the acute phase of disease is at the discretion of the physician.

The bulk of visual acuity improvement has been noted to take place in the first 1 and 6 months after the photoxic event.[8][12] [13] Despite more moderate vision loss at presentation, most patients ultimately return to a visual acuity level of 20/20-20/40.[8] Improvement has been shown to be achieved earlier and more robustly in patients with visual acuity of 0.2 logMAR (20/30 Snellen visual acuity) at presentation.[14] Furthermore, a correlation was found between initial visual acuity and fundoscopic appearance 2 weeks after the phototoxic event.[14] Unfortunately, metamorphopsia and central or paracentral scotomata, including those that show some improvement initially, may become permanent.[8][13]