This is a review of the utility of spectral-domain optical coherence tomography in the diagnosis and management of glaucoma. It will provide a brief review of all modalities, but focus primarily on the Cirrus machine.

Optical coherence tomography (OCT), first described in 1991, is a noncontact, noninvasive imaging technique that can reveal layers of the retina by looking at the interference patterns of reflected laser light.[1] Automated software segmentation algorithms are able to outline the retinal nerve fiber layer with much precision, which is relevant in glaucoma since this layer is thinned as ganglion cells are lost. OCT became widely popular in 2002 with the release of Stratus OCT, a time-domain technology (TD-OCT) that was well-studied and validated for use in glaucoma and retina and went on to become a standard structural imaging test. Only four years later, several companies started to release the next generation technology, spectral-domain OCT (SD-OCT), AKA fourier-domain OCT, which improved upon TD-OCT by capturing more data in less time at a higher axial image resolution, around 5 µm. Ultrahigh speed swept source OCT, ultrahigh resolution OCT, polarization sensitive OCT, and adaptive optics OCT are all on the horizon. 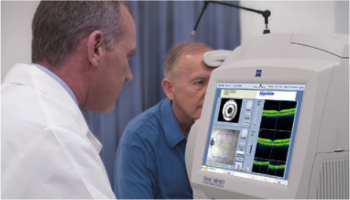 There are three main parameters relevant to the detection of glaucomatous loss: retinal nerve fiber layer, optic nerve head, and the “ganglion cell complex.” The numeric values for all parameters are shaded as white, green, yellow, or red, with the yellow and red representing, < 5% and < 1%, respectively compared to the normative database. 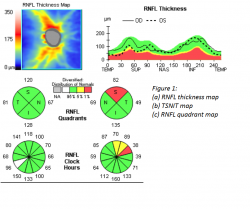 Glaucoma is a group of many conditions sharing a final common pathway characterized by accelerated death of retinal ganglion cells and their retinal nerve fiber layer (RNFL) axons resulting in characteristic visual field defects and corresponding optic nerve head anatomical changes. SD-OCT can directly measure and quantify RNFL thickness by calculating the area between the internal limiting membrane (ILM) and RNFL border (how the edge of the RNFL is determined and how blood vessels are handled are different among the machines, which do not have interchangeable measurement outputs).[3] The Cirrus RNFL map represents a 6 x 6 mm cube of A-scan data centered over the optic nerve in which a 3.4 mm diameter circle of RNFL data is extracted to create what is referred to as the TSNIT map (temporal, superior, nasal, inferior, temporal).  It is displayed as a false color scale with the thickness values referenced to a normative database. The TSNIT map displays RNFL thickness values by quadrants and clock hours, and the RNFL peaks give a sense of the anatomic distribution of nerve fiber axons represented by the superior and inferior bundles that emanate from the optic nerve (see figure 1).1

SD-OCT also automatically outlines the optic nerve head, optic cup, and disc borders similar to mental estimations by clinicians, but then also calculates more objective measurements such as optic disc area and neuroretinal rim area in addition to the classic clinician-subjective average and vertical cup-to-disc ratios. Cirrus does this by defining the edge of the disc as the termination of Bruch’s membrane and then finds the shortest perpendicular distance to ILM, AKA minimum band distance, to define the inner cup margin in each slice in a spiral around the optic disc cube data until a center is located. This allows the 3.4 mm RNFL circle to always be centered in the same spot within the cube, which was not possible with TD-OCT.  The calculated ONH parameters, except for disc area, are then compared to a normative database (see figure 2).1 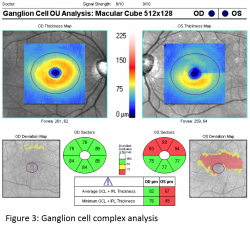 Use of SD-OCT in Diagnosis of Glaucoma

It is well known that significant structural RNFL loss occurs prior to the development of functional visual field loss.[7] In such preperimetric disease, SD-OCT RNFL is especially useful in helping to diagnose glaucoma prior to the onset of visual field loss. In the presence of perimetric disease, finding RNFL bundle loss on SD-OCT with a corresponding abnormality in the visual field served by those retinal ganglion cells can help confirm the diagnosis of glaucoma.


Use of SD-OCT in Detection of Glaucomatous Progression

Repeatability and Reproducibility of SD-OCT

Studies have evaluated the reproducibility and repeatability of SD-OCT measures relevant to assessing change over time. One study of Cirrus found excellent intravisit and intervisit reproducibility of measurements of peripapillary RNFL thickness and ONH parameters. The intervisit tolerance limit for average RNFL thickness was 3.89 µm suggesting that a reproducible decrease of 4 µm or more may be a statistically significant change. [8] A more cautious cutoff would be a 10 µm change, roughly twice the maximum standard deviation found in that study. However, it is important to exclude any scans that are not of adequate quality. Scans with a signal strength less than 6, with eye movement or blinking artifacts within the 1.73-mm radius around the optic nerve head, or with segmentation errors should be repeated.

GPA, introduced in 2009 on the Cirrus, compares the RNFL thickness of individual clusters of A-scans, referred to as pixels, between baseline and follow up RNFL thickness maps to estimated test-retest variability.  Local pixels exceeding such test-retest variability are coded in yellow at the first event, and in red if the same changes are seen on three consecutive images (see figure 4). In order to generate an overall trend plot, two baseline scans with three follow up scans are necessary.  This linear regression line in µm/yr, representing rate of change, is drawn with an estimated confidence interval carried forward. 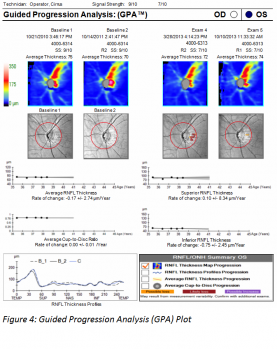 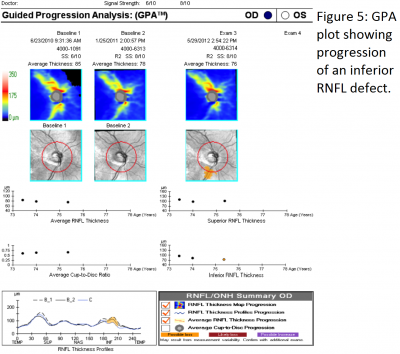 In early to moderate glaucoma, progressive thinning of RNFL thickness measured by SD-OCT is a very useful tool to judge progression of disease. At advanced stages however, SD-OCT is less clinically useful due to a “floor effect” of RNFL thickness. With advanced loss, RNFL thickness levels off, rarely falling below 50 µm and almost never below 40 µm due to the assumed presence of residual glial or nonneural tissue including blood vessels.[10] At this level of disease, serial visual fields are more useful to judge progression. (see figure 6) 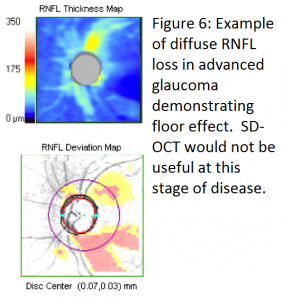 Correlation of OCT with Visual Field

Due to the variability or possible artifacts with SD-OCT measurements, all changes on OCT should be correlated with visual field changes before confirming definite progression. When such correspondence is not found, caution should be exercised and sources of erroneous measurements should be sought, a few of which are reviewed below.

As previously stated, SD-OCT measurements are compared against an age-matched normative database. The normative database for the Cirrus SD-OCT consisted on 284 healthy individuals with an age range between 18 and 84 years (mean of 46.5 years). Ethnically, 43% were Caucasian, 24% were Asians, 18% were African American, 12% were Hispanic, 1% were Indian, and 6% were of mixed ethnicity. The refractive error ranged from -12.00 D to +8.00 D.3  Due to this relatively small normative database and wide variation of distribution of RNFL, many results obtained by SD-OCT may be flagged as abnormal statistically in patients who are not represented in the database and thus not necessarily representing real disease. Clinicians should use caution to avoid overtreating “red disease” in these situations.[11]

One common special case is the myopic patient. As mentioned previously, high myopes were not included in the normative database. Myopic eyes have thinner RNFL measurements, which can confound comparisons to the normative database. Additionally, myopic eyes can have unique distributions of RNFL bundles. With increasing myopia, the superotemporal and inferotemporal RNFL bundles tend to converge temporally.[12] This may result in the temporal shift of the superior and inferior RNFL bundle peaks of normal magnitude. Due to this shift, although the peaks are of normal magnitude, they can be interpreted as thinned due to having a different distribution from the normative database. Additionally, even in normal eyes, split RNFL bundles, both superiorly and inferiorly, have been found on histologic section, thus representing a true normal variant which may appear abnormal on SD-OCT (see figure 7).[13]

While the limitations of the normative database may hinder the utility of SD-OCT in diagnosing glaucoma using a single scan, serial SD-OCT scans can be very useful to judge glaucomatous progression by setting a baseline scan against which to judge progressive thinning on subsequent scans. Therefore, each patient can be his or her own “normative database” to diagnose glaucoma in such difficult settings as high myopia. With this approach, clinicians should be aware that RNFL thickness decreases with age in normal, healthy individuals. Based on a longitudinal study, the age-related rate of reduction in RNFL thickness has been estimated to be -0.52 µm/year, -1.35 µm/year, and -1.25 µm/year for average, superior, and inferior RNFL respectively.[14] 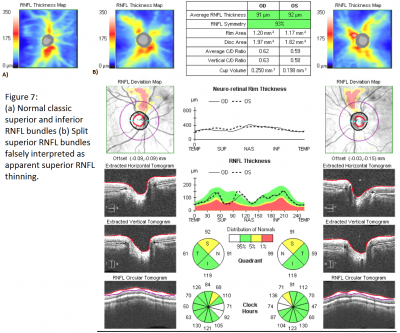 When assessing the adequacy of a scan, the signal strength should always be noted. The signal strength, reported on a scale of 0 to 10, is defined as the averaged intensity value of the signal pixels in the OCT image. The best quality scans have signal strength greater than 8 (minimum acceptable scan > 6). In one study, artificially defocusing an image scan by +2 diopters resulted in an artifactual 10 µm thinning of the RNFL.[15] Similarly, a 9.3% increase in mean average RNFL thickness was seen after cataract surgery in a study of 45 patients.[16]

An SD-OCT RNFL scan consists of multiple single A-scans side by side to represent a B-scan cube. With eye movement or blinking, these scans do not align correctly which can lead to an erroneous RNFL thickness measurement, which may be misinterpreted as progressive thinning (see figure 8). The new SD-OCT versions have a built-in eye tracking function which can help compensate for eye movement by relying on blood vessel registration or iris tracking. Using the eye tracker significantly improves the reproducibility of RNFL measurements.[17] 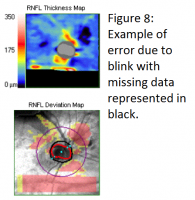 It is important to look at the segmentation lines produced by any SD-OCT machine’s software algorithm to ensure that they are appropriately placed. Lines should not come together (go to zero). Occasionally, one will find that the segmentation lines are misplaced along the retina leading to errors in the calculation of RNFL thickness (see figure 9). These segmentation errors are more common in the presence of poor signal strength, tilted discs, staphylomas, large peripapillary atrophy, epiretinal membranes, and posterior vitreous detachments. Studies have found a decreased incidence of such segmentation errors in SD-OCT compared to TD-OCT.[18] 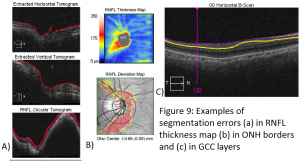 The en face scanning laser ophthalmoscope (SLO) image should be examined to ensure the absence of a media opacity, such as a posterior vitreous detachment (PVD), within the circumpapipillary scan area. Areas in which data is missing due to an opacity are represented in black on the en face SLO image (see figure 10). In such a case, the overlying PVD can lead to a falsely thin RNFL measurement in the underlying area. Additionally, as mentioned previously, cataracts can affect RNFL thickness measurements. One study found a 4.8 µm increase in RNFL thickness measurement after cataract surgery. This effect was most pronounced in cortical cataracts, followed by posterior subcapsular cataracts. Interestingly, nuclear cataracts were not found to affect signal strength or RNFL thickness measurements.[19] 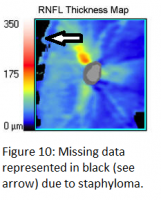 Axial length has been shown to influence SD-OCT measurements of both RNFL thickness and ONH parameters due to axial-length induced ocular magnification. The longer the eye, the thinner the RNFL, and the smaller the optic disc area and neuroretinal rim area.[20] Axial-length induced ocular magnification is not currently accounted for by Cirrus SD-OCT. However, refractive error independent of axial length has not been found to affect RNFL thickness measurements as long as a well focused fundus image is obtained during scan acquisition by utilizing the Cirrus SD-OCT internal fixation focus adjustment.[21] This adjustment can account for refractive errors from -20.0 D to +20.0 D.[22]

SD-OCT is a powerful objective structural assessment tool that can greatly assist clinicians in diagnosing and managing glaucoma (especially early disease), when used in conjunction with visual field testing and serial clinical exams.