To investigate possible relationships between age, activity, glycemic level, and use of blood-thinning agents and/or NSAIDs as they relate to the occurrence of subconjunctival hemorrhage (SCH) occurrence, we tracked behavior and dosing in a wide range of patient subjects. From 2001-2010, 75 patients presented with SCH in a busy, medium-sized ophthalmologic practice. In working with patients to crystallize causation and future prevention, patterns emerged which concur significantly with seminal past findings regarding SCH and vitreous hemorrhages.

The phenomenon commonly known as eye hemorrhage has been duly and thoroughly addressed in the literature, with especial focus on the occurrence of hemorrhage as it relates to three factors: presence of diabetes, sleep patterns, and activity levels. Tasman focused on vitreous hemorrhage and diabetic-intensified hypoglycemia, noting that almost two thirds of hemorrhages in that study were observed at what is most commonly the maximal hypoglycemic state—upon arising from normal sleep. [1]

Anderson honed in on activity as it relates to occurrence of hemorrhage in diabetics, with similar findings. Nearly two thirds of instances of SCH or of SCH-related symptoms in that study were observed after arising from sleep or after emergence from a restful pose; eg, sitting or lying down.[2] Besides potentiated hypoglycemia post-sleep, the literature also tends toward correlating a relationship between the use of blood-thinning agents such as aspirin and warfarin.

In 2010 Kobayashi purported a relationship between post-operative (cataract) SCH and the use of such medications. In that study of 355 patients, 182 discontinued use of aspirin or warfarin one week pre-procedure, and the remaining 173 patients maintained their regular dosing regimen through the week preceding cataract surgery. Approximately 10% more patients in Kobayashi’s maintenance group (27 vs 17) experienced post-surgical SCH.[3] Fukuyama et al, in a 1990 overview of SCH causation, note no significant predilection regarding age and SCH susceptibility, but qualify their findings by stating that the SCH cases investigated in their study associated with hypertension tend to be found in older hypertensive patients.[4] 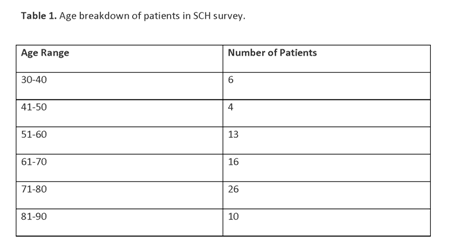 Of the 75 patients, there were 38 male and 37 female patients. Incoming patients with bleeding secondary to surgical or accidental trauma were not part of this survey. In at least 54 out of 75 patients there was a definite history of discovery after arising from normal sleep (6 to 8 hours of heavy sleep). In 2 additional patients, SCH was noted after arising from a nap (approximately one to two hours light sleep). In 6 patients, sneezing immediately preceded the discovery. In one case each, the bleeding occurred during a contact lens insertion or makeup application. Five patients noted the problem later in the day and one after a strenuous activity, push-ups. Two patients noted SCH after moderate activity: golfing and gardening, respectively. In 2 subjects, SCH occurred after reading. 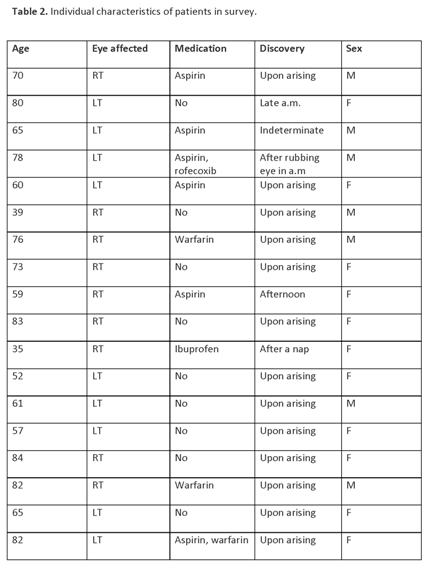 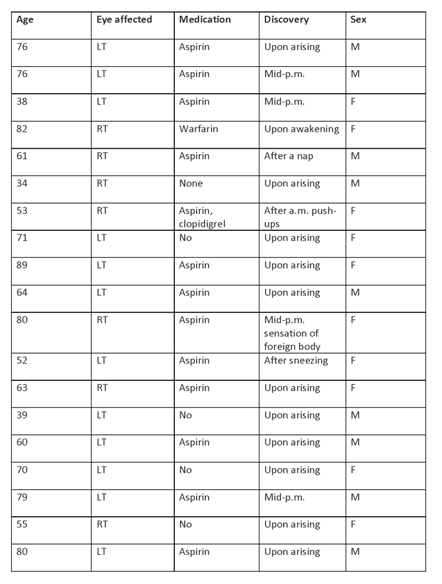 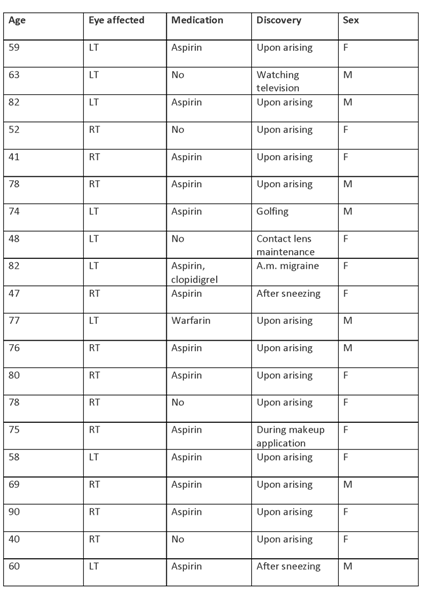 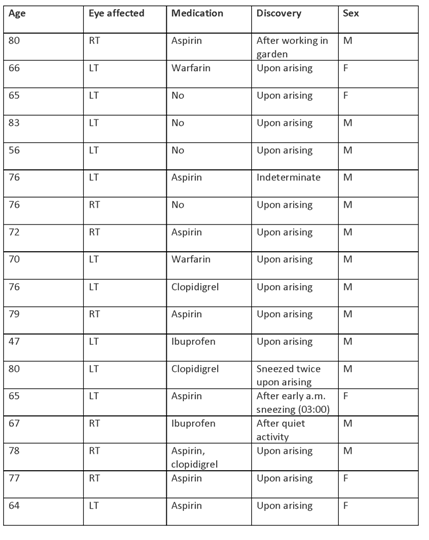 The use of aspirin was involved in 40 patients presenting with SCH. To that end, our findings concur significantly with Kobayashi from a thrombotic standpoint, keeping in mind that patients in his study were recovering from post-surgical trauma, while the patients in our study did not have any predisposing trauma or infection and were simply presenting with spontaneous SCH. Of those 40 individuals, 3 patients were undergoing concomitant clopidogrel therapy.

Warfarin was used by 6 of the patients, and 4 others were taking a nonsteroidal anti-inflammatory drug (ibuprofen, 3; rofecoxib, 1). No patients in our study reported taking any anti-hypertensive medication. In all, 23 of the 75 patients presenting with SCH took no known hematologically active agent. In a few patients, no actual time or event could be associated with the bleeding. In concordance with the work of Tasman and Anderson, slightly more than two thirds (71%) of hemorrhages (vitreous in the aforementioned studies, subconjunctival in this study) were noted upon arising from regular sleep or a nap,[1][2] and could very well be linked to apnea and rapid eye movements during dreams.[2]

Hypoglycemia does not seem to be a direct causational factor since few patients were diabetic. But in the few that were, hypoglycemia significantly increases the intensity of dream state with attendant hypertension and rapid eye movements.[2] Regarding age and predilection of isolated-incidence SCH in this study, we roughly concur with Fukuyama, et al.[4] Less than one half of the SCH presenters in this study were age 71 or older (36/75; 48%). With significant age-related predilection to SCH, one would expect the number to skew much higher; ie, two thirds to three quarters of presenters age >70. We can attribute the increased rate of presentation in older patients to undiagnosed mild hypertension and/or the effects of aging on small vessel viability.[5]

Lastly, limiting and/or more closely monitoring physical activity and respiratory phenomena in free-living adult persons would have little effect on the incidence of SCH, just as Anderson demonstrated in vitreous hemorrhages in diabetics.[2] Here, too, sneezing and physically straining activities (eg, moderate: gardening or strong: push-ups) were a likely cause in only a handful of isolated-incidence SCHs (7/75; 9%).

Sincere, grateful, and heart-felt thanks to Professor Antonio Callavale, Milano Center of Excellence. Through generously involving me in your publication efforts, you inspired me to reawaken mine. Thanks also to Patrick Kernan, medical editor, for copy editing, word processing, and submission organization.