Hypertropia is an ocular disorder characterized by either constant or intermittent upwards deviation of one eye in comparison to the other eye. On the other hand, hypotropia involves downward deviation of one eye compared to the other. Hypertropia can also be referred to as vertical strabismus. The most common type of vertical strabismus is a trochlear nerve palsy.[1] The fourth cranial nerve, aka trochlear nerve, innervates the superior oblique muscle. The trochlear nerve has the longest intracranial course and is the only cranial nerve that exits dorsally from the brainstem. This long course of the trochlear nerve makes it susceptible to acquired injury.[2] The most frequent cause of injury to the trochlear nerve is trauma.[3] One common manifestation of a superior oblique palsy is double vision, which is relieved by tilting the head towards the unaffected side.[2] Tilting the head toward the affected side would worsen double vision by leading to greater separation of the two images seen by the patient.[2] Below, we discuss diagnostic procedures for hypertropia.

The three-step test, also known as the Parks-Bielschowsky three-step test or the Parks-Helveston three-step test, is a diagnostic test used to identify which muscle is paretic in the case of an acquired hypertropia. This method uses the cover-uncover test, with or without the Maddox rod to measure the amount of deviation in different head positions. It was first described by Bielschowsky in 1935 and later popularized by Marshall M. Parks. This test is most useful in diagnosing superior oblique palsies in clinical practice.[4][5]

The three-step test may also be used to diagnose the less common inferior oblique or vertical rectus muscle palsy and can be used in differentiating DVD from other vertical strabismus. It is designed for the diagnosis of a single paretic vertical muscle and is unreliable when there are multiple paretic muscles or in restrictive strabismus. This test may also help in identifying if a superior rectus palsy is true or simulated in a patient with an inhibitional palsy of the contralateral antagonist. 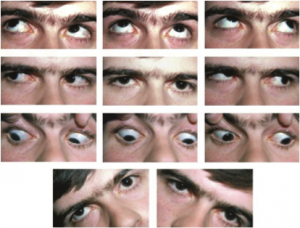 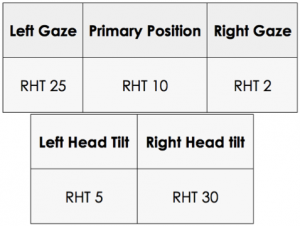 Step 1. Which eye is hypertropic?

In this patient, the right eye is hypertropic (RHT). When trying to isolate which muscle is paretic in a right hypertropia, it must be either one of the depressors of the right eye or one of the elevators of the left eye. Therefore, we have deduced from step one that the paretic muscle must be one of the following cyclovertical muscles:

Step 2. Does the hypertropia increase in right gaze or left gaze?

In this patient, the hypertropia increases in left gaze. Understanding the field of action of each cyclovertical muscle is critical for further deduction of which muscle could be paretic in step two. The field of action of an extraocular muscle is the direction in which the muscle’s primary action is the greatest. In each of the cardinal positions of gaze, there is always one muscle in each eye which is the prime mover. When measuring a deviation in side gazes for step two of the three-step test, the examiner is attempting to isolate specific muscles which are the prime movers in those gazes.

Step 3. Does the hypertropia increase in right head tilt or left head tilt?

Step three is the final step in determining which of the two remaining muscles is paretic. In this example, the right hypertropia is worse in left gaze.

During head tilt to the right, the otolith system sends impulses to the extraocular muscles that assist in torsion, because the eyes need to adjust to the right head tilting by a compensatory rotation to the left around the anteroposterior (Y) axis. On right head tilt, the left eye excyclotorts due to the actions of the left inferior oblique and the left inferior rectus. Likewise, the right eye incyclotorts due to the actions of the right superior oblique and the right superior rectus.[8]

Another way to approach the 3-step test 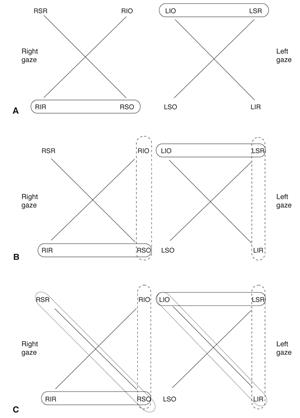 Figure 2: A-Step 1: Right hypertropia can be secondary to insufficient action of the Right eye depressors: right inferior rectus (RIR) or right superior oblique (RSO) or insufficient elevation in the Left eye: left inferior oblique (LIO) or left superior rectus (LSR). B-Step 2: The right hypertropia increases on left gaze, this indicates insufficient action of RSO or the LSR. C-Step 3: The hypertropia is worse on right head tilt. When we tilt the head to the right, the right eye intorts and the left eye extorts. From the two muscles that we have isolated so far (RSO vs. LSR), only the RSO extorts, therefore, the RSO is weak or underacting.

A fourth step can be added to 3-step test to quantitate the torsional component of trochlear nerve palsy by using the subjective Red-Glass or Double Maddox rod. The Maddox rod is a lens with serial prisms aligned evenly to convert a point of light into a line 90 degrees away from the meridian of the prims. In a double maddox rod test, two lenses of different color are used.

The examiner or patient then turns the knob of the Maddox lens until the two lines are parallel. The magnitude of cyclotropia and the direction of deviation is measured by the displacement of the scratch mark on the Maddox rod from the 90-degree mark on the trial frame. More than 10 degree of excyclotorsion suggests bilateral trochlear nerve palsies.[9]

One of the pitfalls of the Red-glass and Double Maddox Rod tests is that they are subjective and results are variable according to the examiner. To address the challenges of issuing these tests at the bedside, researchers have developed a computerized red glass test for quantifying and localizing diplopia.[10]

Wong et al recommended adding a fifth step to the 3- step test called upright-supine test.[11] This test is used to differentiate skew deviation, a vertical misalignment with or without head tilt or fundus torsion of supranuclear origin (brainstem or cerebellum) from other causes of vertical strabismus including trochlear nerve palsy. In this study, participants fixated on a single-letter opto-type in 12-point font that was located meters away in the mid-saggital plane at eye level. Prisms with increased power were then placed over the deviated eye and the cover was placed over each eye in an alternating fashion. The highest prism strength with no refixation movement was recorded in prism diopters. This test was then repeated for each participant in the supine position. A positive upright-supine test result was defined as a 50% or greater decrease in the vertical deviation measured from the upright to supine position. There was no significant difference between the upright and supine positions for patients with trochlear nerve palsies, restrictive strabismus, or other causes of vertical strabismus. There was a statistically significant decrease for patients with skew deviation. This step can be added after the 3 step test and after the fourth step described above in order to differentiate between skew deviation and other causes of vertical strabismus.[11]

Sensitivity of the Three Step Test