Torpedo maculopathy (TM)/ solitary hypopigmented nevus of the retinal pigment epithelium (RPE)/ paramacular albinotic spot syndrome/ congenital hypomelanotic freckle/ atypical macular coloboma was first described by Roseman and Gass in 1992, as a rare congenital anomaly of the RPE that produces a disruption of outer retinal layers [1]. So far, short series and scarcely any data about prevalence, demographics or incidence have been reported. Pathogenesis remains unknown and the typical lesion is a single hypopigmented area in the macula, asymptomatic, temporal to fovea and with a characteristic torpedo-shape.

Shirley et al. published an eight-cases series showing a slightly female predominance, being the mean age at diagnosis was 8 years old (range 3-15). Moreover, starting from population studies, incidence was estimated as 2/100.000 in Northern Ireland (Belfast) citizens of less than 16 years old, probably underestimated since it is an asymptomatic condition, though [2].

Several theories have been proposed to explain the pathogenesis of TM:

On exam, visual acuity is not generally affected considering there is no foveal involvement, so that it is usually considered an incidental finding. Nevertheless, central scotoma or microscotoma can be present at diagnosis. It is mostly unilateral, flat, asymptomatic and non-progressive, although bilateral, crescent and satellite wounds are also reported [2] [8] [9][10]. Furthermore, association with neurosensory retinal detachment or multifocal central serous chorioretinopathy have been published [11][12] and a recent one with a double-torpedo lesion, as well [13]. Only 4 cases have been issued in the literature of choroidal neovascularization (CNV) associated with TM, as it is commonly stationary [2][14] [15][16]. Owing to the RPE and outer retina damage, these lesions are susceptible of CNV appearance and need to be close followed-up[2]. There is a characteristic hypopigmented torpedo-shape area, temporal to macula, pointing to fovea with an hyperpigmented tail. The typical size is about two disc diameters horizontally by one disc diameter vertically, usually with foveal involvement [17].

Funduscopic exploration is patognomonic: solitary hypopigmented oval-shaped, with hints of a bullet or a torpedo, with a wedge-shaped tail extending peripherally and pointing toward the foveolar region along the horizontal raphe. 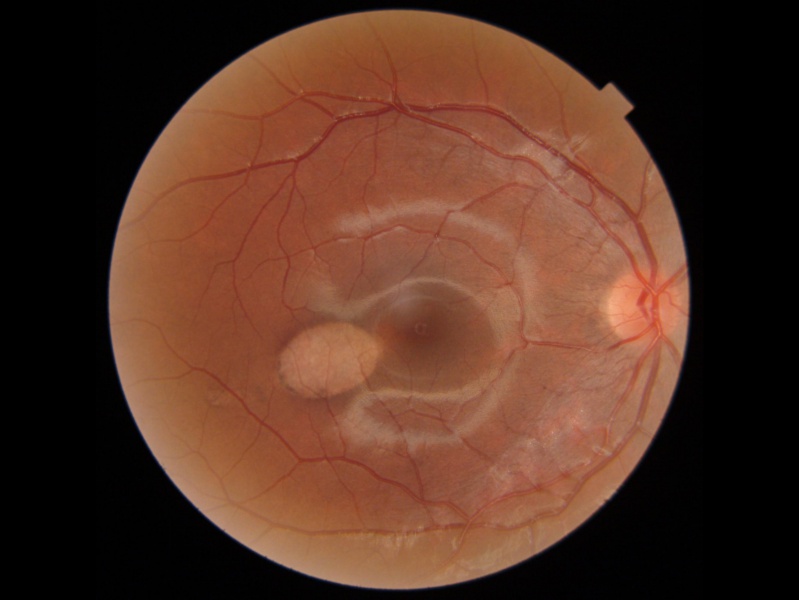 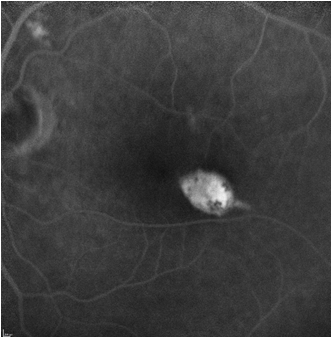 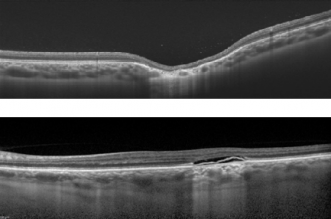 Figure 3. A) OCT displays A Type 1 lesion with attenuation of interdigitation zone and ellipsoids, without outer retinal cavitation. B) A sample of Type 2 lesion: OCT shows cavitation in outer retinal layers as well as loss of ellipsoids. [21]

In general, since TM is a congenital condition, it is thought that remains stable over years with no risk of vision loss. Nevertheless, considering the rare possibility of CNV or progression, it is strongly recommended periodically monitoring these patients, semiannual or annual [11]. Patients can self-monitoring as well with an Amsler grid, although in cases of large lesions or the presence of pigment clumping, more frequent observation must be ensured.