Globe luxation is a rare condition  that can present spontaneously or following trauma, where there is complete or partial prolapse of the globe from the orbit. Varying degrees of globe prolapse may be encountered in clinical practice with varying clinical/functional and structural outcomes.[1][2][3] Severe cases may be associated with avulsion where there is partial or complete disconnection of the optic nerve and/or extraocular muscles..

Globe injuries in general may be classified into closed globe injuries, open globe injuries. Associated and sever form of injuries include globe laxations and globe avulsions. Several classifications may be employed in relation to globe luxation.

Alternatively it may be classified in to luxation alone (with or without partial avulsion), dislocation( globe prolapse into the paranasal sinuses or intracranial cavity) or complete avulsion.[5][6][7]

Based on the etiology, globe luxation can be classified as spontaneous, voluntary and post-traumatic. Spontaneous luxation may occur without conscious effort, with or without predisposing factors. Typically this includes shallow orbits, lax orbital soft tissue and adnexal structures. Voluntary globe luxation is the ability to protrude the globe by the patient, most often by simple conscious eyelid manipulation. Traumatic luxation occurs following high velocity direct or indirect trauma especially to the head and neck region. Trauma seems to be the most common etiology for the luxation of the globe, the spectrum of which include road traffic accidents, surfboard injury and from other forms of extreme sports, human and animal bites, domestic blunt or penetrating injury and finally self-inflicted injuries. Road traffic accidents appear to be the common cause.[4][8][9][10][11]

There are also 56 reported cases (71 globes) of self enucleation/auto enucleation (Oedipism Rex)[12] since 1933-2015 with a significant proportion either from underlying mental illness (mostly schizophrenia), religious influences, dementia and those under influence of recreational drugs.[13][14][15][16]

Gouging was a brutal fight in which a combatant was successful if he would press the adversary’s eyeball out with his thumb by sudden severe torsion on the globe. This was a common cause of globe luxation many years ago especially in the west prior to the invention of revolvers for duels. Surprisingly no serious or permanent damage has been reported lately.[17]  Accidental gouging has also been reported in obstructed labour as a problem due to faulty application of forceps during delivery. [18] 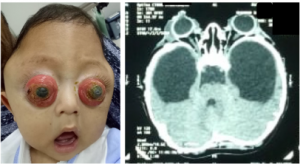 Figure 1. Globe luxation in Crouzon syndrome. Note the shallow orbit on the CT-scan

Figure 3. Globe luxation from fall on an iron fence.[27]

Isolated anterior luxation of the globe alone, without optic nerve or extraocular muscle avulsion, occurs when a blunt object is insinuated in the superomedial orbit, between the globe and the superomedial orbit. This not only induces a globe prolapse but is also followed by a secondary severe reflex spasm of the orbicularis oculi locking the globe in place. While the eyelids normally play an important role in preventing globe prolapse, blunt or sharp objects encountered in daily life such as bike handles, gift wrapping tubes, door handles, fences, etc may induce a globe prolapse from secondary raised intraorbital pressure whilst pushing the upper eyelid backwards.[3][27][28][29][30][31]

A second mechanism is the coup-contre coup injury, commonly associated with craniofacial trauma. A resultant orbital haemorrhage may precipitate rapid anterior movement of the globe(s).

A third mechanism is direct result of sudden reduction of the orbital cavity volume such as following large blow-in fractures, typically of the orbital roof.[3][32] Paradoxically, large displaced orbital wall blow out fractures may precipitate a globe prolapse into one of the paranasal sinuses – most commonly the maxillary sinus and less commonly the ethmoidal sinus and even more rarely the intracranial cavity.[3][25][33][34][35]

An avulsion of the optic nerve and/or extraocular muscle(s) following the globe luxation may be from sharp objects, or a bony fragment that may transect that the optic nerve, aggravated  by extreme forward displacement of the globe. The latter movement may cause a complete disruption of optic nerve fibers at the lamina cribrosa, which lack a myelin sheath. Extraocular muscle involvement is also common following severe maxillofacial trauma e.g Le Fort II or III fractures, with almost 90% of midfacial fractures associated with ocular trauma presenting with significant proptosis or some degree of globe luxation.[4][36] 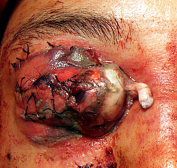 Presenting clinical symptoms may vary from a completely asymptomatic patient (underlying psychiatric conditions – ‘la belle indifference’) to one with severe pain and visual loss. Acute presentation include a restless patient with profuse bleeding, periorbital ecchymosis, apparent proptosis with immobile globe with secondary blepharospasm. Rarely, the cut end of the optic nerve may also be visualized.[37]

Apart from visual loss persistent globe luxation can also lead to other complications such as corneal abrasion, exposure keratopathy, secondary blepharospasm and pthisis bulbi in late stages from ocular ischemia and/or corneal perforation. Life threatening complications such as meningitis, intracranial hemorrhage and cerebrospinal fluid leakage have also been reported.[4] In auto-enucleation cases, the injury and complications may be more severe and even life threatening. These include visual field defects not only in the ipsilateral eye but also contralateral eye from chiasmal damage causing temporal field defect and also neurovascular sequale such as subarachnoid hemorrhage.[16][37][38][39]

Loss of extraocular muscle(s)’ is reported when one or more muscles are avulsed or transected. The most common muscle involved is the medial rectus followed by the inferior rectus, superior rectus, lateral rectus and oblique muscles respectively in that order.[4][36][40]

In typical globe luxation, the globe is visualized outside the orbit but in rare situations, the patient may present with an ‘empty socket’. In such situations, the globe may be prolapsed into one of the paranasal sinuses (maxillary sinus followed by the ethmoid sinus).[1][35][26][41] Displacement of the globe into paranasal sinus can be easily explained by large displaced blow out fractures. Careful examination should be performed when the trauma involves the ethmoid sinus due to the proximity of the skull base with potential CSF leak (‘liquor fistula’).[42] Even more rarely, globe luxation into the into the anterior cranial fossa may occur  following by extensive and displaced frontal fracture of orbital roof, with a combination of high intraorbital pressure and dehiscence of the orbital roof as causative factors.[7][43][44]

Management of the globe luxation is an ophthalmic and medical emergency,  as most cases end up with poor visual prognosis despite best and early management. There are two established maneuvers that have been described to repositioned the luxated eye ball. Both require some form of cooperation by the patient and if possible, with some sedation and/or anesthesia along with an orbicularis or facial nerve block. The first maneuver is performed while asking the patient to look down. The upper eyelid is gently and firmly pulled upward while the globe is simultaneously depressed with the index finger of the other hand to repositioning the globe. The second method is using Desmarres retractor which is introduced between the upper lid and the globe. Once the tip is under the eyelid, digital manipulation is performed to depress and reposition the globe into the orbit.[45][46] 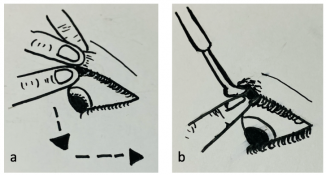 Figure 6. Illustration the technique of manually reposition the globe luxation. (a) Ask the patient to look downward while we pull the upper eyelid upward and push with index finger of the other hand down and backward as shown with arrow. (b) Same procedure but using desmares to help pull the upper eyelid.

In cases where there is associated optic nerve or extraocular muscle damage, globe restoration must be performed as early as possible to restore full structural and hopefully functional recovery of the globe. Secondary procedures that may be considered include performing a tarsorrhaphy, upper eyelid retraction repair, orbital fracture repair, and orbital decompression in severe cases.[4][32] High dose intravenous corticosteroid and neuroprotective agent may also be considered to reduce posttraumatic inflammation and edema albeit with limited evidence. Panje et all recommended 1 mg dexamethasone/kg body weight initially continue with 0,5 mg/kg every six hours for next 24 hour, and 1 mg/kg per day for one or two days for the optic nerve injury.  After successful globe reduction, the patient should have immediate relief of pain and return of vision and extraocular muscle function if there is  no optic nerve and extraocular muscle damage. Such functional recovery has been reported up to a week post luxation.[20][30][46][47][48]

Management for globe luxation into the paranasal sinus is similar to blow out fracture repairs but should be performed much more delicately with least induced iatrogenic trauma and undue delay.

There are two techniques to reposition the globe luxated into the paranasal sinuses. The first is direct traction on the globe with instrumental help. The  second is manual repositioning of the globe via transmaxillary  or transnasal approach.[5][25][33][49] In these cases, close collaboration with an endoscopic assisted craniomaxillofacial surgical technique is essential for good exposure with least trauma t to the vital orbital structures including  the globe, the extraocular muscles and the optic nerve.[50] Orbital reconstruction may then be performed either with autologous bone or more commonly one of the alloplastic implants - titanium plates,  porous poplyethylene or bioresorbable implants.[25][33][49] 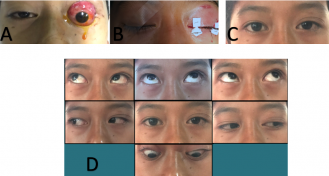 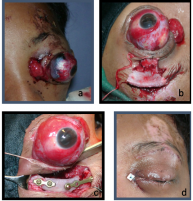 In patients who present with autoenucleation, management should include psychiatric consultation, suicide precautions and securing family support. Rapid parenteral tranquilization is often needed as a prophylaxis against suicide and further self mutilation.[14][15][51]

The sequence of management thus is initial globe repositioning, followed by exploration and repair of avulsed extraocular muscles when present preferably as soon as possible. It should be remembered the longer the globe and orbital structures are prolapsed, the poorer the structural and thus functional and even esthetic prognosis owing to ocular ischemia, exposure keratopathy, extraocular muscle retraction within the orbit. Preservation of the globe even in patients with  visual loss is important in the view of aesthetic and psychological considerations of the patient and family.[1][3][52][53]

In exceptional cases of either several and completely avulsed globe along with optic nerve and extraocular muscles or in patients presenting late with severe exposure , corneal perforation or phthisis, enucleation may be performed  (5,9% ).[36][54] Enucleation therefore is the last option in managing this condition, and only should be done when the integrity of the globe can’t be repositioned and reinserted after all possible efforts, and also in such case of complete optic nerve and extra ocular muscle avulsion.[52][53] In such patients the socket should be rehabilitated either as a delayed primary procedure or secondarily with an orbital implant and customized prosthesis to restore normal appearance thus aiding psychological rehabilitation.

Globe luxation and avulsions are ophthalmic emergencies as they are severely vision threatening and sometimes bilateral. Early diagnosis and proper management by repositioning the globe and trying to reattach the extraocular muscles may lead to possibility of regaining visual recovery, better cosmetic, physiological result, and improves psychological status of the patient.