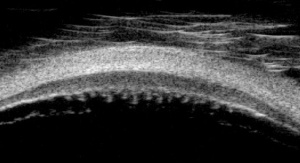 Ultrasound Biomicroscopy (UBM) is a technique primarily used for imaging of the anterior segment (AS) of the eye. It was first introduced in the early 1990’s by Foster and Pavlin as a way to obtain cross-sections of the eye at microscopic resolution.[1] Compared to regular ultrasound modalities such as A-scan or B scan (10 MHz), UBM uses a much higher frequency transducer (35-100 MHz).[2] This results in resolutions up to 20um axially and 50um laterally, and depth of tissue penetration is 4-5mm. UBM can be used for imaging much of the anatomy of the anterior segment, as well as associated pathologies, including angle closure glaucoma, ciliary body cysts, neoplasms, and angle trauma.

UBM is a useful non-invasive tool for evaluating the presence of narrow anterior chamber angles, angle closure glaucoma, and pathology of the ciliary body. A high agreement between UBM, especially in a dark room, and gonioscopy has been shown in detecting iridotrabecular apposition.[3] Another advantage is the ability to provide quantitative measurements of the anterior chamber angle (ACA) that are useful for accurate diagnosis and management.[4]

In primary angle closure glaucoma (PACG), the AOD and ACD are significantly decreased and can assist in diagnosis.[5] UBM is particularly useful to confirm presence of iris plateau which has been shown in approximately 33% of patients after laser iridotomy for PACG treatment, an important group of patients that need closer follow-up due to the higher risk of peripheral anterior synechia (PAS) formation and further angle closure.[5]

Further, UBM is frequently used in research to better understand the angle and can be used for qualitative analysis of the anterior chamber angle (ACA). Analysis and interpretation of images begins with identification of the scleral spur, a protrusion of the sclera into the anterior chamber that attaches anteriorly to the trabecular meshwork. UBM can describe the presence of angle closure glaucoma, which is indicated by irido-corneal contact anterior to the scleral spur. It can also distinguish between different types of angle closure, including pupillary block, plateau iris and lens-related.[6]

Although UBM provides high quality images and a close agreement with gonioscopy, the latter remains the gold standard to diagnose narrow angle and angle closure allowing direct visualization of structures to assess the presence and extent of PAS and differentiating from iridotrabecular apposition. Therefore, none of the current AS imaging modalities should be considered a substitution for gonioscopy, rather as a complimentary tool in glaucoma.[7]

UBM is particularly important in the diagnosis and management of ocular surface tumors. It can improve detection of invasion to adjacent structure since it is able to identify the posterior margin identification, even in densely pigmented tumors or cases with corneal opacities in anterior chamber tumors.[8] [9] In contrast, the resolution does not allow a high intralesional detailing with this modality.[9] Additionally, UBM can be used for clinical diagnosis and management of anterior ocular trauma, anterior segment cysts and neoplasms, uveitis/scleritis, localization of IOL implants in suspected uveitis-glaucoma-hyphema syndrome, and planning for secondary IOL implantation, among other uses.[10] [11] [12] Its disadvantages are the need for direct contact of the transducer to the eye or through immersion technique, which requires the patient to be in supine position and may falsely widen the anterior chamber, and its acquisition are patient- and operator-dependent. However in the case of a cyclodialysis cleft where the angle may appear closed to the observer, UBM is particularly useful in the localization of the cleft.

Optical coherence tomography (OCT) is a widely used imaging device in ophthalmology and has been evolving since its first publication in 1991 by Huang et al.[13] This non-invasive imaging technique is capable of providing high-quality cross-sectional images based on the reflectance of tissue using a near-infrared light, in contrast to UBM that uses sound. Its application in the AS was first reported in 1994 and recently is a useful tool with the ability of anatomic and structural measurement with an axial resolution of 5-10µm, lateral resolution of 15-25µm and tissue penetration of 3-6mm.[14] Other advantages are its non-contact principal, fast acquisition and does not require experienced operators.

AS-OCT can also generate up to 10mm corneal diameter CT and ET maps by performing high resolution scans on 8 meridians of the cornea, with automated software that reconstructs the cornea 3-dimensionally.[15] Both CT and ET have shown a strong correlation to the gold standard ultrassound respective measurements with a high reproducibility and repeatability.[16] [17]

Similar to other pachymetry methods (i.e. topography, ultrassound), AS-OCT can detect asymmetric corneal thinning in keratoconus eyes. Interestingly, changes of ET have been shown even in subclinical disease and could be a sensitive marker in early and form fruste keratoconus.[18] Additionally, AS-OCT has been used to assess CT and ET in full-thickness or lamellar keratoplasty planning, limbal stem cell deficiency, dry eye disease, and others.[19] [20] [21]

Lastly, AS-OCT (with high-resolution or commercially available devices) can be a useful adjunct tool in the diagnosis of ocular surface squamous cell neoplasia (OSSN). The characteristic findings are significantly thick and hyperreflective epithelium in OSSN compared to benign lesions such as pterygium and Salzmann nodules, correlating to the histopathological findings.[22]

UBM and AS-OCT are both imaging techniques used to image the AS of the eye. Compared to AS-OCT, the main strength of UBM is its ability to visualize structures behind the iris, including the ciliary body and lens.[23] However, disadvantages compared to AS-OCT include the need for a water-bath immersion with direct contact to the eye, longer image acquisition times, and the need for an experienced operator.

In OSSN, AS-OCT shows a clear advantage by showing intralesional details and providing useful diagnostic information for management and follow-up.[24] Conversely, in non-pigmented iris tumors UBM was superior in identifying the posterior border of lesions with higher reproducibility compared to AS-OCT.[23] Despite having a limited field of view and depth of visualization due to shadowing from keratinized and pigmented lesions, AS-OCT can be a reliable alternative in selected tumors since it is a fast, non-invasive and non-contact imaging technique.

In summary, both UBM and AS-OCT are useful non-invasive complimentary tools that show a strong correlation to histopathology with inherit advantages and disadvantages to each technique. They provide important information of intralesional features, lesion extension, size and morphology; however, more studies are warranted to determine which modality is most suitable for each tumor type.[25] Important to highlight that none of the aforementioned imaging techniques are a substitution for biopsy, which provides a definite diagnosis in ocular surface lesions. Biopsy with histopathology remains the gold standard as it allows histologic diagnosis with cellular atypia assessment, removal of the entire lesion (in excisional biopsy), evaluation of margins and tissue invasion.[24]