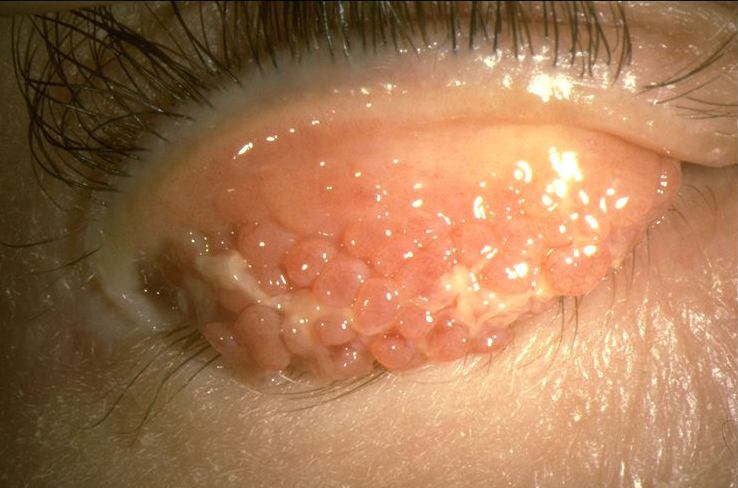 Vernal keratoconjunctivitis (VKC) is an atopic condition of the external ocular surface. It characteristically affects young males in hot dry climates in a seasonal manner; however this is not always the rule.

The first description of VKC is credited to Arlt who described 3 cases of peri-limbal swelling in young patients in 1846[2]. In 1899 Trantas described the limbal white dots that had been previously demonstrated by Horner. In 1908, Gabrielides identified eosinophils in conjunctival secretions as well of the peripheral blood of VKC patients. In 1910, Trantas characterized the spectrum of corneal changes seen in VKC[2].

VKC is a condition seen primarily in hot and dry climates most commonly in West Africa and the Mediterranean basin.[2][3] It is also seen commonly in the Middle East, Japan, India, and South America.[3][4] It is thought to be relatively unusual in North America and Western Europe.[5][4] The increased incidence in hot regions is speculated to be secondary to a higher level of pollution by pollens and various other allergens. Males are affected more than females, but this difference becomes smaller as age increases.[6] It is difficult to obtain an accurate prevalence as many patients may not present to clinics as they may have a mild form of the disease and the condition is largely self-limiting. Depending on region and climate, prevalence of VKC can vary widely. Additionally, prevalence in endemic regions is much higher when looking at adolescents compared to the population as a whole.[4] For instance, one European study demonstrated the prevalence was between 1.2-10.6/10,000.[7] At least one study exhibited a 4% prevalence in African schoolchildren.[8] The majority of VKC occurs in patients between the ages of 5-25 years old with an age of onset between 10-12 years old; however there are reports of patients as young as 5-months-old.[3][9]

A personal or family history of atopy is seen in a large proportion of VKC patients.[10] VKC was originally thought to be due to a solely IgE mediate reaction via mast cell release.[2] It has now been shown that IgE is not enough to cause the varied inflammatory response that is seen with VKC.[2][5] Activated eosinophils are thought to play a significant role and these can be shown consistently in conjunctival scrapings; however mononuclear cells and neutrophils are also seen.[2][5] Additional attention has been given to the CD4 T-helper-2 driven type IV hypersensitivity with immunomodulators such as IL-4, IL-5, and bFGF.[3][5] Thought has been given to a possible endocrine method as well as there is a decrease in symptoms and prevalence after puberty.[2][3]

A hereditary association has been suggested, but no direct genetic associations have been made. VKC is seen more often in patients who have atopic family histories, but no clear correlation with specific genetic loci has been elucidated.[3]

VKC is characterized by symptoms consisting of severe itching, photophobia, foreign body sensation, mucous discharge (often described as “ropy”), blepharospasm, and blurring of vision [2][3]. In a 1988 review, Buckley coined the term “morning misery” which described the active disease state of patients with severe discomfort, blepharospasm and mucous discharge leaving them incapacitated upon awakening and “frequently resulting in lateness for school”[2]. It is typically bilateral but may be asymmetric in nature. While VKC is typically seasonally recurrent (hence the name vernal meaning springtime), 23% of patients may have a perennial form of them disease and many may have recurrences outside of the springtime[3][6].

The signs of VKC can be divided into conjunctival, limbal and corneal signs.

The main differential diagnosis to be considered is atopic keratoconjunctivitis (AKC). AKC typically has an older age of onset in the 2nd to 5th decade, as opposed to onset prior to age 10 with VKC. Conjunctival involvement is classically on the upper tarsus in VKC and on the lower tarsus in AKC. Additionally, AKC is typically more chronic in nature and more commonly results in scarring of the cornea and conjunctival cicatrization, whereas VKC is typically more self-limiting.[11][5] Additional differential diagnoses to consider depending on history and physical would be seasonal allergic conjunctivitis and giant papillary conjunctivitis.

Removal of any and all possible allergens as well as conservative management such as cool compresses and lid scrubs make up the first line of therapy.[14] A topical antihistamine only may work in mild cases.[14] Topical mast cell stabilizers (cromolyn sodium, nedocromil sodium, and lodoxamide) are typically used with topical antihistamines and have been shown to be effective in moderate presentations of VKC.[14] Mast-cell stabilizers have a loading period to reach their full therapeutic effect.[5] If seasonal recurrence is known, it is suggested that mast-cell stabilization therapy be initiated prior to the season in which symptoms are encountered and continued throughout the season.[5] Dual-Action agents with both H1-blocking mechanism and mast-cell stabilization have the benefits of working immediately and having long-term disease modifying effects. Topical corticosteroids are typically the most effective. High pulse dose with quick tapering and use of low-absorptions corticosteroids (fluoromethelone, loteprednol, remexolone, etc.) is preferred when using topical corticosteroid therapy.[14] Oral corticosteroids can be considered in sight threatening conditions.[2][4] Supratarsal injection of local corticosteroid (triamcinolone or dexamethasone) into the upper tarsal papillae can sometimes offer short term relief as well. [15]

Long term immunomodulation with steroid sparing agents such as cyclosporine and tacrolimus is often needed. Topical cyclosporin-A in concentrations of 0.05% to 2% has been shown to decrease inflammatory cytokines and the signs and symptoms of treated VKC patients.[16][17] Tacrolimus 0.1% topically has also shown to improved signs and symptoms of disease, with one study showing improvement even in patients unresponsive to 0.1% topical cyclosporine.[18][19] A study comparing the use of 0.1% tacrolimus ophthalmic ointment dosed twice a day versus 2% CsA eye drops four times a day for the treatment of VKC, did not find a statistically significant difference in signs or symptoms or side effects between the two groups.[20]

Additionally, adult patients with VKC may respond more favorably to topical cyclosporin therapy.[21] Oral anti-histamines are sometimes utilized, but there is no real evidence in their support.

Systemic immunotherapy is also an option, especially for those patients with underlying systemic atopic disease such as atopic dermatitis and asthma. There are case reports of the successful use of omalizumab, an anti-IgE monoclonal antibody, in patients with VKC recalcitrant to other treatment modalities, but this remains an off-label use.[22][23]. Dupilumab is a human monoclonal antibody against interleukin-4 receptor alpha used in the treatment of atopic dermatitis. There is currently a multi-center, double-masked, randomized, and placebo-controlled, parallel-group study that is evaluating the safety and efficacy of dupilumab in the treatment of signs and symptoms of individuals with atopic keratoconjunctivitis (NCT04296864), and may also play a role in treating vernal disease in those patients older than 12 years . However, dupilumab has been found to itself induce atopic keratoconjunctivitis compared to placebo in treated patients, so its role as a primary treatment is debatable.

Generally VKC is a rather benign and self-limiting disease that may resolve with age or spontaneously at puberty.[2] [3][4] Nonetheless, the sometimes debilitating nature of this disease when it is active necessitates therapy to control symptoms. Complications typically arise from occasional corneal scarring and the unsupervised used of topical corticosteroids .[2][3] In some patients symptoms may persist beyond childhood, which in some cases may represent a conversion to an adult form of atopic keratoconjunctivitis.[2] This persistence into adulthood has been shown to be as high as 12%.[24]