Vertebrobasilar insufficiency (VBI) occurs when there is inadequate blood flow through the posterior circulation of the brain in the vertebral and basilar arteries. The posterior circulation supplies the medulla, cerebellum, pons, midbrain, thalamus, and occipital cortex; thus, the symptoms of VBI may vary depending on which part of the brain is affected most significantly.[1]

Vertebrobasilar insufficiency (VBI) was first described in the 1950s by C. Miller Fisher[2] and has since been accepted by the National Institute of Neurological Disorders and Stroke to define a transient ischemic attack in the vertebrobasilar circulation.[3] In 1997, The Lancet published a case report of a 42-year-old woman who suffered a VBI stroke while having her hair washed at the hairdresser secondary to prolonged neck extension. After this report, VBI became commonly known as “beauty parlor syndrome” or “hairdresser syndrome”.[4]

Twenty-five percent of strokes and transient ischemic attacks are in the vertebrobasilar distribution and are more common in men in their 70s and 80s.[5] VBI is more common in African Americans perhaps due to an underlying genetic predisposition and in patients with hypertension, diabetes, and smoking, as well as disparity in access to care.[6]

Strokes can be due to atherosclerotic plaques, embolism, or arterial dissection. VBI is typically due to chronic atherosclerotic plaque.[7] Any sudden drop in blood pressure can cause the VBI to result in a symptomatic transient ischemic attack. Acute changes in blood pressure can be caused by position (e.g., getting up from bed too quickly), exertion (arm or leg exercises), or dehydration. In a sedentary older adult, seeming menial daily activities such as going up a flight of stairs can provoke a TIA or stroke from VBI. Additionally, mechanical forces acting on the neck can result in VBI unilaterally or bilaterally. External forces such as leaning one’s head back in at a beauty salon wash basin, chiropractic adjustments, bird watching, bow hunting or stargazing can result in VBI.

Risk factors for VBI are analogous to those that increase the risk of atherosclerosis such as older age, male gender, genetics, obesity, smoking, hypertension, diabetes mellitus and hyperlipidemia. Patients with a history of other arterial diseases such as coronary artery disease, atrial fibrillation, endocarditis, arterial dissections or hypercoagulable states are also at risk for VBI.[8]

VBI is generally a result of either hemodynamic insufficiency or embolism. Hemodynamic insufficiency can lead to decreased blood flow through the basilar artery or both vertebral arteries which would result in VBI, which is very common in elderly and people with diabetes.[9] TIA symptoms do not typically last long but there are often multiple recurrent episodes of the VBI. Antihypertensives, pacemaker malfunction and vasculitis are also risk factors for VBI.[10] Occlusion of other vessels such as proximal large vessels can result in subclavian steal syndrome which may cause blood to be redirected away from the brainstem through the vertebral arteries.[11] Atherosclerotic plaques may break away and embolize to the basilar artery which could subsequently result in vertebrobasilar insufficiency (VBI). Emboli could also arise from intimal defects caused by trauma or compression. Typically these plaques originate in one of the vertebral arteries and obstruct smaller vessels.[12]

While vertigo is the most common and recognizable symptom associated with VBI, other common symptoms are headaches, dizziness, ataxia, bilateral lower limb weakness, diplopia, oropharynx dysfunction, nausea and vomiting.[13] The vertigo can occur whenever the head is turned which would put pressure on the contralateral vertebral artery and decrease blood flow in the vertebrobasilar distribution. When the vertigo is associated with ocular complaints such as diplopia, the patient often first presents to an ophthalmologist. The patient may also suffer a “drop attack” which is a sudden weakness of the lower limbs and knees causing the patient to fall over.[14] VBI is a specific type of transient ischemic attack and thus must resolve within 24 hours by definition; however, VBI symptoms usually only last a few seconds to an hour.

Imaging studies are generally not required to diagnose vertebrobasilar insufficiency; however, sometimes a CT scan may be performed to detect hemorrhages. An MRI may also be conducted to detect ischemic changes, and an MRA can be helpful to detect stenoses or occlusions. CT angiography is also useful in assessing vertebrobasilar vasculature.[15] (See Figure 1) 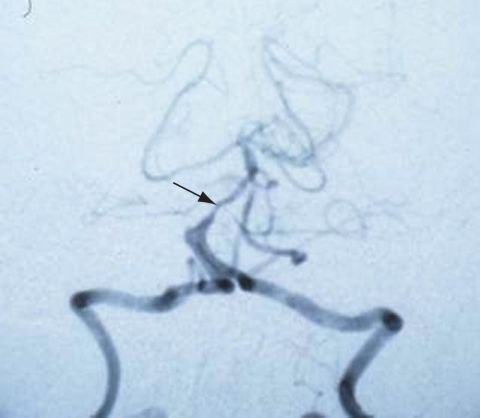 Treatment reliably depends on the root cause of the VBI. Some common culprits are postural changes, exercise and dehydration and so patients could be advised to avoid such precipitating activities.[17] Patients are also counseled on smoking cessation to control risk factors such as hypertension, diabetes and cholesterol. If the patient is an elderly patient that suffered a “drop attack” in which they had associated head or other injuries then they should be advised to sit down if they have lightheadedness or have any vision changes. Sometimes, antiplatelet and anticoagulation medications are indicated to prevent events if hypercoagulability was the cause of the vertebrobasilar insufficiency.[18]

Surgery may be indicated in selected patients and the options are to either do an open surgical repair or endovascular repair with stent placement which is more commonly performed.[19] Some trials have failed to show the benefit of endovascular repair for VBI in the setting of vertebral artery stenosis. [20]