Vici syndrome is a rare, genetic disorder characterized by congenital agenesis of the corpus callosum, bilateral cataracts, hypopigmentation of skin and hair, cardiomyopathy, and immunodeficiency [2]. Hearing loss, seizures and delayed development have also been reported. It is caused by loss of function mutations in the EPG5 gene on chromosome 18q. Although very rare, ophthalmologists who see bilateral cataracts in the setting of multisystem abnormalities should keep Vici syndrome on their differential.

Vici syndrome is a rare, genetic, multisystem disorder that follows an autosomal recessive inheritance pattern. It is characterized by congenital agenesis of the corpus callosum, as well as other brain abnormalities, including pontine hypoplasia and delayed myelination[2]. Often, patients are severely developmentally delayed and present with microcephaly. Another common manifestation of the disease is immune deficiency and consequently, increased susceptibility to infections [2]. Cardiomyopathy, hypopigmentation of skin and hair, cataracts, and skeletal myopathy are other common clinical presentations of the disease[1].

There are less than 100 documented cases of Vici Syndrome.

Vici syndrome is a genetic disorder caused by loss of function mutations in the EPG5 gene on chromosome 18q [1].  The EPG5 gene is involved in autophagy, a multi-step pathway that serves as the body’s waste disposal mechanism. The autophagy pathway is especially active in neural and muscular tissue, which may explain some of the symptoms of Vici syndrome in skeletal and cardiac muscle, as well as the brain [6].  The EPG5 gene allows the transfer and fusion of the autophagosome, which contains damaged or unnecessary cellular products, to the lysosome, where those products are digested. The defective autophagy pathway resulting from the EPG5 mutation translates into the clinical presentation of Vici syndrome, though it is not clear if it results from a build-up of autophagosomes in the cell or other unknown, downstream effects [6]. The EPG5 protein also plays a role in immunity, which may explain why patients with Vici Syndrome are more susceptible to viral and bacterial infections [2].

Vici syndrome is a rare multisystem disorder that was first described by Carlo Vici in 1988[3] he described two siblings with a malformation syndrome consisting with agenesis of the corpus callosum, cutaneous hypopigmentation, bilateral cataract, cleft lip and palate, and combined immunodeficiency [1]. The siblings suffered from severe psychomotor retardation and recurring pulmonary infections. They died at the age of 2 and 3 from bronchopneumonia. 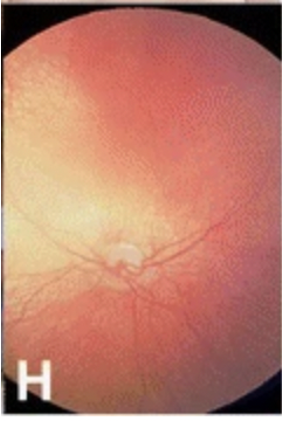 Patients with Vici syndrome typically present in the first year of life with the most common physical findings being hypotonia, failure to thrive, bilateral cataracts, hypopigmentation of the hair and/or skin, and microcephaly [3,4,5].

Bilateral cataracts are seen in 75% of patients with Vici syndrome making it one of the classical diagnostic features [6]. Other ocular features include optic nerve hypoplasia, visual impairment, nystagmus, and fundus hypopigmentation [7]. In some individuals, there is evidence of optic pathway misrouting on visual evoked potential testing. Optical coherence tomography shows a poorly defined and lesser depressed fovea, similar to that of individuals with typical albinism [6,7].

The diagnostic workup for Vici syndrome can be very extensive. Baseline investigation includes immune function, renal function, thyroid function, and liver function tests. This is usually followed by a chest x-ray to assess for thymic hypoplasia, cardiac ultrasound to check for structural defects or cardiomyopathy, ophthalmic assessment to check for cataracts and retinal hypopigmentation and optic atrophy, and perhaps most importantly, MRI of the brain to check for callosal agenesis. EEG and sleep study can also be performed if clinically indicated. Finally, genetic testing can be done to look for mutations in the EPG5 gene [6].

To confirm the diagnosis of Vici syndrome, clinically suggestive features as well as genetic testing confirming the presence of EPG5 mutations must be done. To summarize the eight key features are an “absent corpus callosum, cataracts, hypopigmentation, cardiomyopathy, immune dysfunction, developmental delay, microcephaly, and failure to thrive.”[6]

Mitochondrial, glycogen, and lysosomal storage disorders should be ruled out in patients before considering Vici Syndrome as those are much more prevalent [8].

There is no cure for Vici syndrome. Medical care for affected individuals is largely supportive, and management of Vici syndrome involves treating specific, multi-system symptoms [6]. Cataracts can be surgically repaired, but the severity and expected prognosis should be taken into consideration [6]. Progression of disease should be monitored with regular medical exams, including EEG, CXR, cardiac ultrasound, slit lamp ophthalmologic assessment, and laboratory testing of immune, thyroid, liver, and renal function. The associated immunodeficiency can be addressed via administration of intravenous immunoglobulin therapies and antimicrobial prophylaxis.

All reported cases of Vici syndrome have had a survival of fewer than 10 years [6]. Most patients died before the age of 5 [2]. The cardiac, respiratory, and immune effects of Vici syndrome are the main indicators of prognosis and are often the cause of death.