Vogt-Koyanagi-Harada (VKH) disease is defined as a bilateral granulomatous panuveitis with or without extraocular manifestations affecting young adults.

Since there is much overlapping of signs and symptoms between the two entities, in 1932 Babel suggested to call the entity Vogt-Koyanagi-Harada disease.

The incidence of VKH will vary depending on the geographic location and the ethnicity encountered. The disease primarily affects pigmented races. In Japan it accounts for 6.8% to 9.2% of uveitis cases [2], meanwhile in the United States it hovers around 1%-4%. The majority of the cases found are around the second and fifth decades of life. Women have been reported as being more affected than men; but this will vary depending on the population studied.

VKH typically affects more pigmented groups, such as Hispanics, Asians, Native Americans, Middle Easterners, and Asian Indians, but not blacks of subSaharan African descent. There is an association with HLA-DR1 and HLA-DR4 (subtype 0405). The disease appears to affect women more frequently than men, but no specific sex predilection has been established. [4][5][6]

The pathogenesis is unknown but theories revolve around the possibility that a T-cell mediated autoimmune reaction against one or more antigens associated with melanocytes, melanin, and retinal pigment epithelium (RPE) may play a major role in the disease. The trigger is unknown, but cutaneous injury, or viral infection have been reported as possible factors in some cases. Although the exact target antigen has not been identified, possible candidates for target antigen include tyrosinase or tyrosinase-related proteins, an unidentified 75 kDa protein obtained from cultured human melanoma cells (G-361), and the S-100 protein. [7] [8][6]

A granulomatous process is seen during the acute phase, and a nongranulomatous inflammation is seen during the chronic phase. The primary pathological feature is a diffuse thickening of the uveal tract caused by a non-necrotizing granulomatous inflammation. [9] There is presence of a diffuse lymphocytic infiltration with collections of epithelioid cells and multi-nucleated giant cells.[7] Dalen-Fuchs nodules; representing granulomas between the RPE and Bruch’s membranes, can be observed.[1] 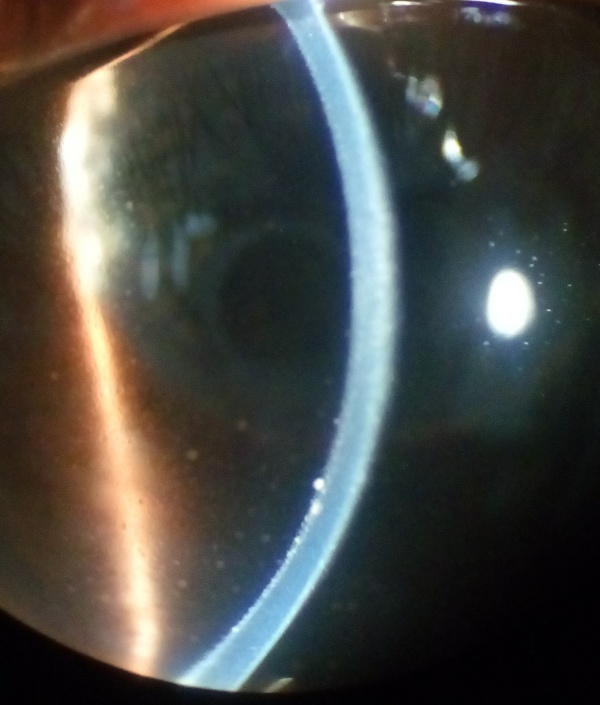 The clinical features of VKH disease will vary depending on stage of the disease. The four stages of VKH are the prodromal stage, uveitic stage, chronic stage and chronic recurrent stage.

The prodromal stage symptoms will resemble a viral illness. Headaches, fever, orbital pain, nausea, dizziness and light sensitivity are present. The symptoms will last around 3-5 days. Within the first couple of days the patient will begin to complain about blurred vision, photophobia, hyperemia of the conjunctiva, and ocular pain. [7][9] [11]

The uveitic stage presents with blurred visual acuity in both eyes (though one eye may be affected first, 94% will involve the second eye within two weeks). [3]The first sign of posterior uveitis include a thickening of the posterior choroid manifested by elevation of the peripapillary retino-choroid layer, hyperemia and edema of the optic disk, and circumscribed retinal edema; accompanied by multiple serous retinal detachments. Eventually, the inflammation becomes more diffuse affecting the anterior chamber, presenting itself as a panuveitis. [7][9][11][12] 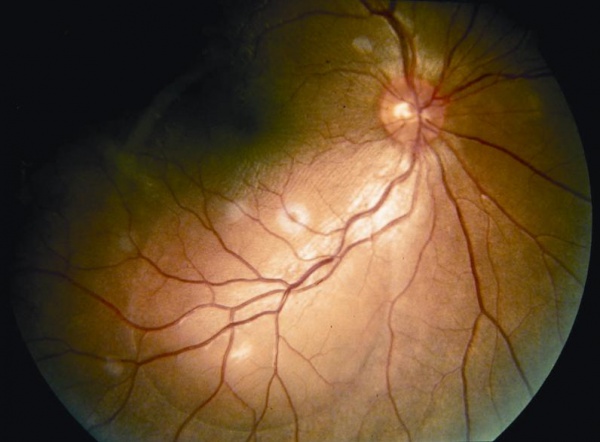 The recurrent stage consists of a panuveitis with acute exacerbations of anterior uveitis. Recurrent posterior uveitis with exudative retinal detachment is uncommon. Iris nodules may appear in this stage. [11] It is during this phase of the illness that most of the vision threatening complications will develop (cataracts, glaucoma, subretinal neovascularization, etc.).[12]

The American Uveitis Society in 1978 recommended the following diagnostic criteria: (1) the absence of any history of ocular trauma or surgery; and (2) the presence of at least three of the following four signs: (a) bilateral chronic iridocyclitis; (b) posterior uveitis, including exudative retinal detachment, forme fruste of exudative retinal detachment, disc hyperemia or edema and “sunset-glow” fundus; (c) neurologic signs of tinnitus, neck stiffness, cranial nerve, or central nervous system disorders, or cerebrospinal fluid pleocytosis; and (d) cutaneous findings of alopecia, poliosis, or vitiligo.[11][13]

Read et al evaluated the existing criteria and concluded that it was inadequate for the diagnosis of VKH.[11] The revised Diagnostic Criteria for VKH disease [6] was established at the First international Workshop on Vogt-Koyanagi-Harada disease as follows:

In the majority of cases the diagnosis of VKH will be based on clinical findings. The following testing modalities are utilized to assist in the diagnosis and to follow the response to treatment.

During the acute stage of the disease we find an early irregular focal or patchy fluorescence of the choroidal circulation. There exist various pinpoint areas of leakage at the level of the retinal pigment epithelium. In the later phases the localized hyperfluorescent spots increase in size, coalesce, and expand into the subretinal space in areas of serous detachment leading to a large area of leakage. The optic disc can demonstrate blurred fluorescent margins accompanied by late leakage.

In the chronic stage of the disease; the presence of diffuse scattered pigmentary changes with markedly pigmented areas adjoining hypopigmented ones (“moth-eaten” appearance) are the hallmark. [11][14]

Soon-Phaik Chee et al report findings in their retrospective study that indicate the importance of early pinpoint peripapillary hyperfluorescence as a prognostic factor in VKH. The absence of this sign suggests that the disease is no longer in its early stages; indicating the need of more aggressive and prolonged treatment to prevent future recurrences. [15] 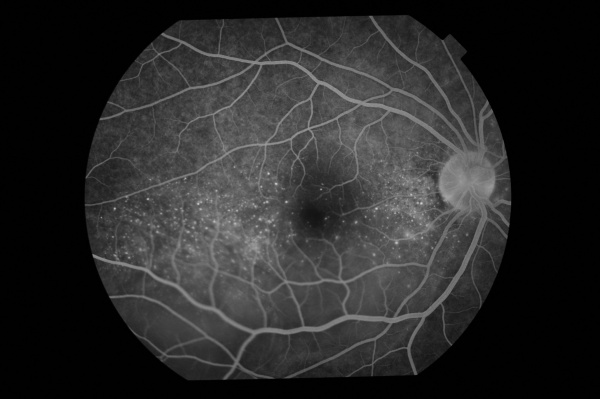 ICG demonstrates an early choroidal stromal vessel hyperfluorescence and hypofluorescent dark spots during the early and midphase, distributed mainly posteriorly, and in excess of those seen clinically on FFA. The late phase will vary according to the current stage of the disease. During the active stage, the hypofluorescent spots fade and are replaced by hyperfluorescent ones (representing focal sites of active choroidal inflammation). In the chronic stage, the hypofluorescent dark spots are seen during all the phases of ICG, but they are unapparent during clinical or FFA evaluation. [3][14]

An OCT will demonstrate the presence of subretinal fluid. In the presence of subtle choroidal folds, they will be detected as corrugation of the RPE/choroid with choroidal thickening.[2][7] Multiple septae creating compartments or pockets of fluid in the outer retinal may be seen. Typically the inner retina inward to the external limiting membrane is normal. There is increased choroidal thickness in acute stage.

During the acute stages of the disease; the ultrasound will present diffuse choroidal thickening with low to medium reflectivity, serous retinal detachments, vitreous opacities without posterior vitreous detachments and scleral or episcleral thickening. [11] [16]

Full-field electroretinography analysis demonstrated diffusely diminished amplitudes in both scotopic and photopic phases in patients in the chronic stages.[7]

Spinal fluid examination reveals evidence of pleocytosis (which may persist for up to 8 weeks)[11] and elevation of protein levels in the early stages.

Treatment involves the prompt use of systemic corticosteroids administered orally at a dose of 1-1.5mg/kg per day for a minimum of 6 months. Lai TY et al reported that patients receiving treatment for less than 6 months were more likely to have recurrences (58.8%) compared to those treated for 6 months or more (11.1%). [17] The initial high dose is maintained for 2-4 weeks followed by gradual tapering of the drug. Many authors differ in what should be considered first-line therapy in VKH disease, advocating the use of immunosuppressant’s as the treatment of choice. Some of the reasoning behind the use of immunosuppressive therapy is to avoid the many side effects associated with long term corticosteroid use. Immunosuppressant therapy as first-line treatment has been associated with better visual acuity outcomes when compared to corticosteroid therapy along. [18] The immunosuppressants that have proven efficient in clinical trials are Azathioprine (1-2.5mg/kg/day) and Cyclosporine A (3-5mg/kg/day). [19]Mycophenolate mofetil and Rituximab have also been used.

It is important to remember that the administration of immunosuppressants should be closely monitored and evaluated alongside an internist for any complications or side effects from the treatment. 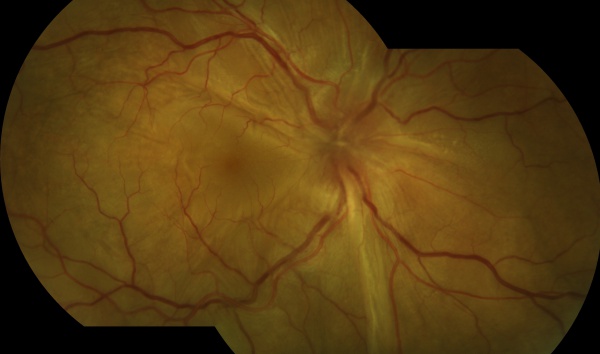 Read et al reported at least one complication developed in 51% of eyes with VKH disease. [20] The most common complications are:

Aggressive therapy, early detection, very slow tapering of oral steroids and use of immunosuppressants are the key to maintaining good visual acuity. The prognosis of the disease is dependent on the duration and the number of recurrent episodes of inflammation. [20] A poor final visual acuity is predicted by a greater number of complications, older age at disease onset, a longer median duration of the disease, delayed initiation of treatment, and greater number of recurrent episodes of inflammation. The better visual acuity at presentation, the more likely the final visual acuity is to be improved. [7][20][21]