Ocular refraction can be determined with a technique called "subjective refraction", which requires the patient's collaboration, and/or with the "objective refraction" technique. This method does not require any input from the patient: instead, instruments such as Retinoscopy, Auto-refractometer and Aberrometer are used to calculate objectively the refraction.

The autorefractor can be employed with or without cycloplegia: the use of cycloplegic eyedrops makes the auto-refractometer a valid alternative to retinoscopy [2].

There are two different forms of wavefront mapping . Wavefront-optimized treatment ablations improve the postoperative corneal shape by taking the curvature of the cornea into account and increasing the number of peripheral pulses; this approach minimizes the induction of higher-order aberrations. Wavefront-guided ablation uses information obtained from a wavefront-sensing aberrometer (which quantifies the aberrations) that are transferred electronically to the treatment laser to program the ablation. This is distinct from conventional excimer laser and wavefront-optimized laser treatments, in which the subjective refraction is used to program the laser ablation. Wavefront-guided technology is used in CustomVue laser eye surgery to correct refractive error and mitigate symptoms previously seen with conventional excimer ablations. Results of wave-front guided compared to wave-front optimized ablations are comparable.[3] 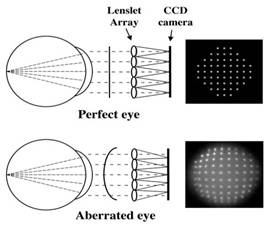 Higher-order aberrations can have a significant impact on quality of vision and are often linked to glare and halos that may cause night vision problems. Wavefront analyzers often use a Hartmann-Shack sensor, which maps both lower and higher-order aberrations by projecting waves of light into a patient's eye and mapping the waves that bounce back through the pupil. A perfect wavefront would be completely flat. When light rays enter the eye and traverse the different refractive indices, the wavefront surface changes, taking on a shape unique to that eye. These variations are called wavefront aberrations.

Depending on the instrument, an operator can detect a corneal wavefront, an internal wavefront or a total wavefront (corneal+internal).

Other software include the possibility to analyze data via a Fourier transform-based algorithm. The Fourier series is an infinite expansion that can be used to represent any complex shape (such as a wave aberration) by breaking it into its frequency components. In this case, both lower and higher-order aberrations can be decomposed in the so called "Fourier transformation".

Both wavefront-guided and wavefront-optimized treatment profiles can be used to provide excellent improvement in vision.[5]