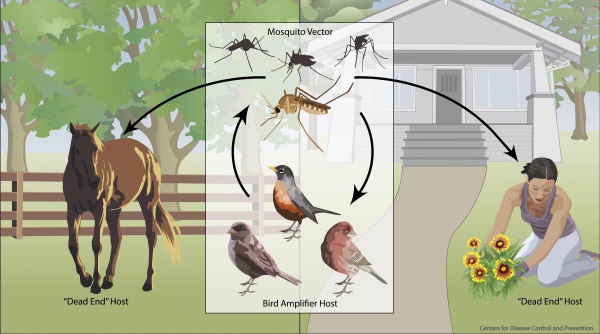 The West Nile virus (WNV) is a single-stranded RNA flavivirus of the Japanese encephalitis serogroup. It is a zoonotic disease most commonly transmitted by the bite of the Culex genus of mosquitoes (especially Culex pipiens). WNV reservoirs are wild birds though horses and humans act as “dead end” hosts (Figure 1).

Alternate routes of human infection have been documented in the case of blood transfusions, organ transplants, exposure in a laboratory setting, and vertically during pregnancy. However, the vast majority of cases of WNV infection have been from infected mosquitoes.

There are several risk factors associated with WNV infection. Chief among them is living in an area in which the virus is prevalent. Originally, the virus was limited to sites on major bird migratory pathways including Africa, some of Europe, the Middle East, West Asia, and Australia. Since 1999, when the virus was introduced into the United States, WNV has spread from Canada to Venezuela.

In the United States, a higher concentration of WNV infections has been present in the western states (e.g. Montana, Colorado, Wyoming). However, new information indicates that infection is increasing, with Centers for Disease Control data indicating 5674 cases of infection and 286 deaths attributable to the virus in 2012.

Additional risk factors include the following: age > 50; certain medical conditions (cancer, diabetes, hypertension, kidney disease, and solid-organ transplants); lack of proper mosquito protection; and exposure to mosquitoes during the summer months (the time of year during which outbreaks are most common). Recent research suggests that a mutation of the chemokine receptor type 5 (CCR5) gene, which has a protective effect against HIV predisposes a homozygote to developing neurologic manifestations.

After becoming infected with WNV, there is usually an incubation period that can last from two to fifteen days. Though 80% of WNV infections in humans are subclinical, the remaining 20% typically manifest as a febrile illness. Constitutional symptoms – fever, headaches, fatigue, myalgias, malaise, nausea, emesis, anorexia, and rash – are common.

In approximately 1% of all WNV infections, West Nile neuroinvasive disease develops. This manifestation is associated with meningoencephalitis, a poliomyelitis-like syndrome, muscular weakness, and acute flaccid paralysis. There are rare non-neurologic complications of WNV infection that tend to affect those with suppressed immune function more often. These complications include fulminant hepatitis, pancreatitis, optic neuritis, viral hemorrhagic fever, and chorioretinitis.

Although the exact molecular pathophysiology of WNV infection remains an area of active study, recent research supports the hypothesis that WNV likely gains access to cells through interaction with toll-like receptor 3 (Tlr3) and CCR5. It is likely that WNV infection causes a Tlr3-induced inflammatory response, weakening the blood brain barrier. Thus, the virus is able to penetrate into the brain and cause its more devastating pathologies. As a member of the Flaviviridae family, WNV is a single-stranded RNA virus that causes host cells to produce progeny virions using host proteins.

In 80% of cases, a patient will have an asymptomatic course of ocular WNV infection. It is more likely that chorioretinal findings will be observed after the patient has already been diagnosed with WNV infection.

Diagnosis is typically made through history, physical examination, and serology.

Classically, the patient has been previously diagnosed with a past WNV infection and has no reported ocular symptoms.

Typical symptoms of WNV infection are acute headache, weakness, myalgia, arthralgia, gastrointestinal symptoms, and maculopapular rash. If neurological involvement is present, symptoms and signs of meningitis and encephalitis may be present.

In the case of active infection or lesions along the macula, the patient may report decreased visual acuity, floaters, conjunctival injection, visual field defects, and diplopia.

A high degree of suspicion is required to make the diagnosis of WNV retinopathy in patients who have not been previously diagnosed with WNV infection. Suspect those who have had recent exposure to mosquitoes, blood transfusion, organ transplantation, and travel through endemic areas. 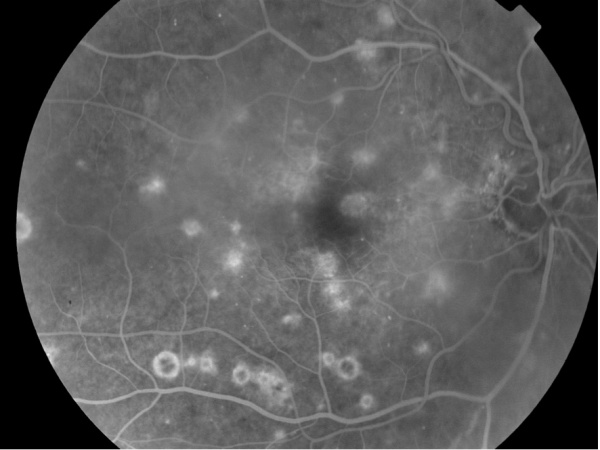 Autofluorescence may highlight the old scars better than fundus examination of fundus photograph.

Serologic testing of blood or cerebrospinal fluid for WNV IgM and neutralizing antibodies often successfully identifies active WNV infection. Specimens may not be positive by IgM prior to eight days of infection. A positive IgG test in the absence of IgM simply indicates that a flavivirus infection has occurred, not that an active infection is present.

Other diagnostic tests include

For screening blood before transfusion these tests are available

There are a wide variety of other infections that present similarly to WNV infection, including those that can cause meningitis and/or encephalitis. The following are common causes of illnesses that present in similar ways: HSV-1 encephalitis, enterovirus, Legionnaire’s disease, Rocky Mountain spotted fever, EBV, HHV-6, Japanese encephalitis, encephalopathy due to systemic illnesses (e.g. subacute bacterial endocarditis, systemic lupus erythematosus), and drug-induced aseptic meningitis.

There is currently no proven treatment for WNV infection. For systemic infection, therapy consists in supportive treatment. In severe cases, hospitalization for the administration of intravenous fluids and respiratory support may be necessary.

Should choroidal neovascularization occur, anti-VEGF therapy may be warranted.

Primary prevention of infection is the mainstay of WNV infection control. Wearing protective clothing, using mosquito repellent, and using mosquito larvicides are proven strategies for decreasing the incidence of infection. A vaccine for WNV is currently under development but has not gone through clinical trials.

Prognosis for WNV retinopathy is very good. In the vast majority of cases, the ocular disease is self-limited and visual acuity returns to baseline.