Optical coherence tomography (OCT) is a high resolution cross-sectional imaging modality initially developed for retinal imaging. Anterior segment OCT (ASOCT) imaging was first described in 1994 by Izatt et al [1] using the same wavelength of light as retinal OCT, namely 830nm. This wavelength is suboptimal for imaging the angle due to limited penetration through scattering tissue such as the sclera. OCT imaging of the anterior segment with a longer wavelength of 1310nm was developed later on and had the advantages of better penetration through sclera as well as real-time imaging at 8 frames per second [2]. Currently, there are two commercially produced dedicated anterior segment devices, the SL-OCT (Heidelberg Engineering) and the Visante (Carl Zeiss Meditec, Inc.), of which only the latter is available in the United States. With the development of fourier domain OCT (FDOCT) technology, real-time imaging of the posterior segment has also become feasible. Several retinal FDOCT devices allow imaging of the anterior segment, however they still use the shorter wavelength of 830-870nm with its inherent disadvantages in imaging the AC angle. The higher resolution provided by FD retinal OCT devices does have advantages in imaging other structures in the anterior segment such as the cornea and conjunctiva. Fourier domain OCT devices operating at the longer wavelength suited for AC angle imaging have also been described [3][4], but these are not yet commercially available in the United States. 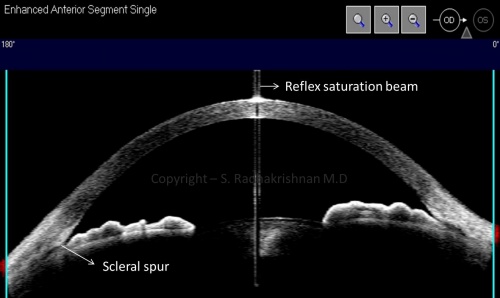 The Visante OCT has several scanning protocols of which the Enhanced Anterior Segment Single Scan and the High Resolution Raw scan are most useful for angle assessment. Figure 1 is an example of a good-quality Enhanced Anterior Segment Scan. The important features include good horizontal and vertical centration of the image within the frame, the presence of a reflex saturation beam indicating perpendicularity of the eye to the scanning beam and minimal tilting of the image. The scan dimensions are 16 x 6 mm and 4 image frames are averaged in order to increase the signal to noise ratio. In this scan protocol, the image is automatically corrected for the effects of refraction of the scanning beam. The High Resolution Raw Scan samples 512 A scans/image (as opposed to 256 A scans/image for the Enhanced scan), there is no image averaging or refraction correction.

An important landmark to identify when interpreting ASOCT images is the scleral spur. This is visible as an inward projection of the sclera (see Figure 1) at the junction between the inner scleral and corneal curvatures. Apposition between the iris and the inner corneo-scleral wall has been used in several studies [5][6] as a qualitative method of detecting angle closure, however it must be noted that the degree of apposition may be variable and does not correlate exactly with appositional closure as defined by gonioscopy. In addition, several studies have shown that the when using the Anterior Segment Scan protocol which does not utilize image averaging, the scleral spur is not visible in about 25% of cases [7] – in this situation, it is still possible to qualitatively assess irido-corneal apposition in most images. 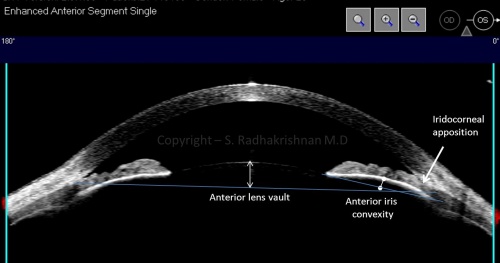 Quantitative measurement of the AC angle is possible with in-built software in most of the anterior segment devices and also requires identification of the scleral spur. Several parameters have been described [8] and studies have shown good reproducibility [9][10]. Limitations in visibility of scleral spur and the wide natural variation in angle anatomy within the same eye as well as between eyes are limiting factors in the routine use of quantitative measurement for angle assessment.

The commonly used quantitative parameters are as follows (Figure 3):

Several other quantitative parameters such as iris thickness [11], anterior chamber width [12] and lens vault [13] have also been described.

Besides ASOCT, ultrasound biomicroscopy (UBM) may also be used for cross-sectional imaging of the anterior segment and the AC angle. When compared to ASOCT, UBM has the unique advantage of enabling visualization of structures posterior to the iris such as the ciliary body, zonules and the peripheral lens. However UBM is relatively more uncomfortable, requires a highly skilled operator in order to obtain good quality images and has a limited scan width (5 x 5 mm with the traditional UBM devices).

Clinical use in glaucoma 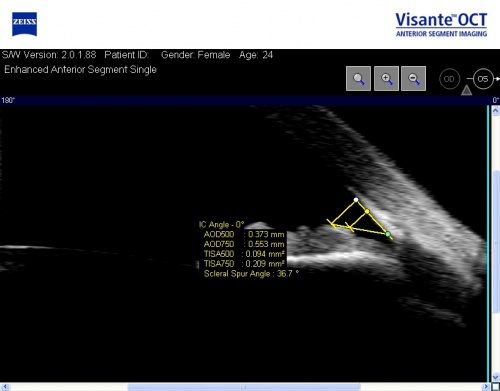 In clinical glaucoma practice, ASOCT is useful as an adjunct to gonioscopy as well as a substitute when gonioscopy is not feasible due to corneal pathology or lack of patient co-operation. In addition, it is extremely useful as a patient education tool, especially when laser peripheral iridotomy is being recommended. When compared to gonioscopy, OCT has the advantages of being non-contact and can be performed under dark conditions allowing angle assessment during physiological mydriasis. Based on the iris profile and position of the lens with respect to anterior segment structures, mechanisms of angle closure such as pupillary block and anterior lens vault can be discerned (Figure 2). It is important to note that structures behind the iris cannot be visualized with OCT, hence diagnosis of posterior mechanisms of angle closure such as iridociliary lesions and plateau iris must be confirmed with ultrasound biomicroscopy. ASOCT is also more useful than UBM for serial monitoring of the angle since approximate alignment with ocular landmarks (such as iridotomies, iris nevi, conjunctival blood vessels etc.) can be performed with ASOCT by utilizing the video image during OCT scan acquisition. It is important to keep in mind that not all scan types are corrected for errors due to refraction of the OCT scanning beam and comparisons must only be made between similar scan types. OCT may also be used to visualize trabeculectomy blebs and anterior segment implants such as drainage devices and keratoprosthesis – however, the clinical value in these situations appears to be limited.

Angle assessment with ASOCT has thus far been mainly focused on measurement of static factors such as the AC angle width. Recently there has been increasing interest in assessing dynamic factors such as change in iris area or volume [14][15] that may identify eyes that are at a risk of acute primary angle closure.