Bleb related infections (BRI) are a common problem, and will be encountered by both comprehensive ophthalmologists and glaucoma specialists alike. BRI may develop days to years after surgery and can be a devastating complication of glaucoma filtering surgery leading to permanent visual loss. BRI are categorized as early-onset BRI when infection develops within 1 month after glaucoma filtration surgery and late-onset BRI when infection develops 1 month after surgery.[1][2] There are two major classifications of BRI: blebitis and bleb associated endophthalmitis (BAE). Both entities may represent a continuum of infection. A single-center retrospective review from the 1990s showed that the 5 year risk of blebitis and that of BAE is 6.3% and 7.5%, respectively.[3] A prospective multi-center Japanese study reported a prospectively determined cumulative probability of bleb-related infections to be 2,2% at 5 years.[4] A retrospective cross-sectional study reported the 5-year cumulative incidence of 0.55% for blebitis and 0.45%–1.3% for bleb-associated endophthalmitis in US.[5] A thorough understanding of BRI is important to ensure proper management of these complications and to prevent visually devastating outcomes. Blebitis and bleb associated endophthalmitis, as well as risk factors and treatments, will be discussed in the following sections.

The term blebitis was introduced in 1994 by Brown et al. to describe a presumed infection in or around a filtering bleb without vitreous involvement; it could be associated with mild to moderate anterior chamber (AC) reaction.[6] Clinically, it refers to a limited form of infection around or inside a filtering bleb, often with an associated anterior chamber reaction and even hypopyon. Multiple factors have been identified as risk factors for BRI such as flat AC, early wound leak, suprachoroidal hemorrhage, male gender, young age, prior infection, axial myopia and chronic use of antibiotics.[2][7][8][9] Increased bacterial load also seems to be a risk factor, such as in patients with blepharitis, conjunctivitis, URI, and nasolacrimal duct occlusion.

Bleb leakage has been shown to increase the risk of bleb infection 26 fold.[10] Most believe that BRI begin secondary to bleb leakage, which allows bacteria from the tear film and the periocular structures access into the eye. However, it is also possible that a bleb infection may lead to breakdown of the bleb wall and subsequent leak. Early leakage is defined as leakage within the first 3 months following surgery, while late-onset leakage is defined as those occurring more than 3 months following surgery. Early leakage is most commonly caused by wound dehiscence or incomplete conjunctival closure. Late-onset leakage has been associated with the use of adjunctive anti-metabolites, which are used to prevent fibrosis and scarring of the scleral flap and bleb in order to promote long-term patency. The use of Mitomycin-C (MMC) has been associated with a 15% risk of leak at 5 years.[11] The use of anti-metabolites such as 5-fluorouracil (5-FU) and MMC reduce the population of goblet cells, which produce mucin that serves as a protective barrier against leakage and bacteria. Their use also promotes general conjunctival thinning, reduced cellularity, and avascular blebs (Slide 1), which are other risk factors for leakage.[12] It is of paramount importance to broadly and extensively undermine the conjunctiva during surgery so that aqueous humor has a diffuse area to diffuse through, which will more likely promote a low and diffuse bleb, as opposed to a small and tense one. This technique will further reduce the chance of leakage.[13] 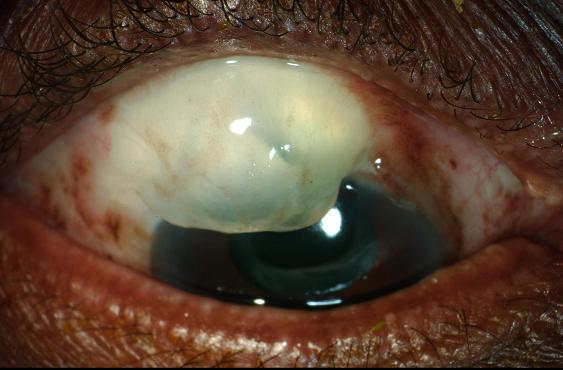 Given its importance as a risk factor for infection, bleb leakage should be assessed at each visit following trabeculectomy surgery, as early detection and management may prevent more serious complications and infection. This is accomplished by the use of the Seidel test (Video 1) where the clinician paints the conjunctiva with a moistened fluorescein strip; if a leak is present, the fluorescein will be washed away by the aqueous humor leaking through the bleb wall. (Slide 2) Leaks can be managed by a variety of techniques. In general, leaks that occur within more vascular conjunctiva have a better chance of closure with conservative measures. Conservative management consists of direct suturing, 18mm bandage contact lens, compression sutures, cyanoacrylate tissue adhesive, aqueous suppressants, and/or fourth generation fluoroquinolones.[11][14] Bleb needling techniques can be successful for tense vascular blebs to decompress and reduce the mechanical stress on a focal area of the bleb. Bleb revision with conjunctival advancement has been shown to be effective in managing avascular leaking blebs and is also associated with less infection.[15] Amniotic membrane grafting has been introduced as a possible alternative to conjunctival advancement, but it was shown only to have a 45% success rate compared to 100% success rate for conjunctival advancement.[16] 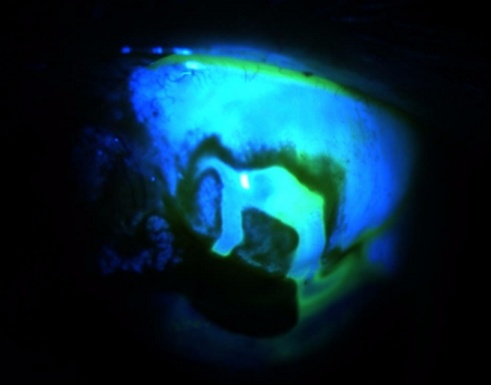 Slide 2. Image of a positive Seidel test. Note the fluorescence as the leak washes away the fluroscein stain.

Patients with blebitis characteristically have sudden onset pain, photophobia, discharge, hyperemic and injected conjunctiva with a white or opacified bleb, as well as mildly reduced vision and an anterior chamber reaction with or without frank hypopyon. The classic description of blebitis is a “white-on-red” appearance of the opacified bleb surrounded by the hyperemic conjunctiva (Slide 3). Bleb leakage is often found, however, the inflammatory/infectious debris may temporarily occlude the site of leakage from the bleb. The most common pathogens in blebitis are Staphylococcus aureus and Staphylococcus epidermidis.[17][18][19] 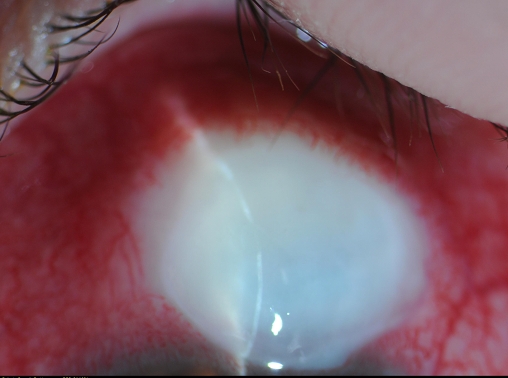 Slide 3. Image showing characteristic “white-on-red” appearance of acute blebitis. Note the slit beam demonstrating the area of marked thinning that corresponds to the leak shown in Slide 2. Also note the avascularity and tenseness of the bleb.

Early diagnosis and aggressive treatment are paramount to preventing devastating sequelae. Culture of any purulent material should be obtained if possible to identify inciting organism(s). There is no universally agreed upon regimen, however, if no vitreal involvement is present, aggressive topical treatment which targets the organisms most likely to cause these infections is generally initiated.[20][21] Options include fortified antibiotics such as vancomycin (25-50mg/mL) or cefazolin (50mg/mL) and fortified tobramycin(14mg/mL) alternating Q30min for 48hrs after a loading dose. Taper fortifides after 48 hrs to regular strength based on improvement. Another widely used regimen is the use of a fourth generation fluoroquinolone Q1hr.[21] Consideration be given to adding topical steroids 24 hrs after clinical improvement to attempt to salvage the patency of the flap and prevent fibrosis and scarring. One may also consider hospital admission for rigorous topical antibiotics if infection is especially severe or if compliance is an issue. Close follow up is necessary to ensure clinical improvement.

The microbes most commonly associated with blebitis are less virulent than those in BAE, are part of normal lid/lacrimal flora, and produce no exotoxons; therefore with successful treatment, visual prognosis is good. Poulsen and Allingham showed retrospectively that visual acuity was at least 20/25 in all successfully treated patients.[22]

If inflammatory or infectious material in a blebitis extend beyond the anterior chamber, the diagnosis is bleb associated endophthalmitis. BAE can have a clinical presentation similar to blebitis, except that the vitreous is involved. A positive vitreal culture is pathognomonic for BAE. The risk factors for BAE and blebitis are similar and numerous, including bleb leakage and the use of anti-metabolites. Inferior blebs are associated with a 7.8% risk per patient-year vs.1.3% risk per patient-year with superior blebs.[23] The increased risk is believed to be due to the immersion of inferior blebs within the tear lake with concentrated bacteria, having less protection from the upper lid and, more mechanical irritation from greater exposure.

In addition to the findings noted above for blebitis, patients with BAE often have more robust conjunctival inflammation and hyperemia, as well as more severe pain, markedly decreased vision, and accelerated course. Vitreal inflammation in a patient with a bleb infection is BAE until proven otherwise (Slide 4). B-scan may show vitreal involvement if there is no view of the retina on exam. Bleb leak may or may not again be present at the time of presentation due to plugging of the leak with inflammatory and bacterial debris. The microbes most commonly associated with early BAE include Staphylococcus epidermidis. Late onset BAE is associated with greater percentage of Streptococcus species 31%, and Gram-negatives such as Haemophilus influenzae 23%, Enterococcus 7%, Pseudomonas 7%, and fewer Staphylococcus species 7%-22%.[23][24][25] 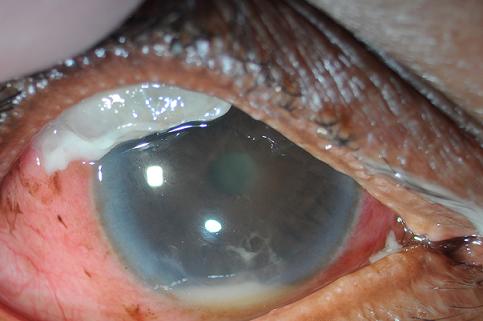 No clear management algorithm has been established for bleb associated endophthalmitis. High dose broad spectrum intravenous antibiotics and topical fortified antibiotics form an important part of management. Vitreous tap for identifying organism and its antibiotic sensitivity should be performed and intravitreal antibiotics.

Extrapolation from the endophthalmitis vitrectomy study (EVS) is inadequate given the patient populations are different (early post-operative cataract patients in EVS vs. bleb associated endophthalmitis patients), clinical circumstances are different, and microbial organisms are dissimilar.[27]In a retrospective interventional case series, Busbee et al. showed early pars plana vitrectomy (PPV) was superior to conventional tap-and-inject treatment methods in patients with culture positive BAE.[22] They further showed that there was less likelihood of severe visual decline, lower incidence of no light perception vision, and significantly better visual outcomes with PPV compared to tap-and-inject. Aggressive treatment is important to prevent poor outcomes. Early PPV with intravitreal vancomycin (1mg/0.1mL) and either ceftazidime (2.25mg/0.1mL) or amikacin (0.4mg/0.1mL) is the preferred approach.[26][27] Consider adjunctive intravitreal dexamethasone(0.4mg/0.1mL) which may modify the inflammatory response and consequent damage to retina and other ocular structures.[28]

BAE has a poor visual prognosis even with aggressive medical and surgical treatment. Retrospective studies have shown that 94% of cases of endophthalmitis resulted in visual acuity of 20/200 or less.[20] Busbee et al. showed that 35% of patients had no light perception, and only 10% achieved 20/40 or better. They also demonstrated that those with a positive vitreal culture had poorer outcomes, likely due to a higher bacterial load at time of diagnosis.[25]Additionally, poorer outcomes are thought to be the result of more virulent organisms, such as gram-negative bacteria that produce exotoxins and streptococcus species. A significant number of eyes with BAE can end up being eviscerated or enucleated due to pain.[29]