The aim of this mini review is to present some efforts for application of computational fluid dynamics in the science of Ophthalmology. It is more than apparent that the eye itself, comprises a brilliant model for this kind of studies, in view of a possible clinical application in the near or not so near future.

A fluid is a substance that deforms under an applied shear stress. Fluids are a subset of the phases of matter and include liquids, gases, plasmas and plastic solids. They can be defined as substances that have zero shear modulus or in simpler terms a fluid is a substance which cannot resist any shear force applied to it.

Depending on the relationship between shear stress, and the rate of strain and its derivatives, fluids can be characterized as one of the following:

The behavior of fluids can be described by the Navier–Stokes equations—a set of partial differential equations.

The human body is characterized by a high concentration of fluids so a reasonable thought is to describe certain functions with the assistance of computational fluid dynamics (CFD). Computational fluid dynamics is one of the techniques of fluid mechanics that uses numerical methods and algorithms to investigate and solve problems that involve fluid flow.[1] Using CFD, one can assemble a computational model that represents a structure. Application of the fluid flow in physics and chemistry to this virtual model will yield a guess of the fluid dynamics and related physical incidents. (Figure 1)

Consequently, CFD is a refined computationally-based technique for analysis. CFD software gives the ability to imitate flows of gases and liquids through computer modeling. The elementary starting point of almost all CFD problems is the Navier–Stokes equations, which characterize any single-phase fluid flow. These equations can become less complicated by eradicating terms relating viscosity to give up the Euler equations. To make things even more straightforward, by removing terms describing vorticity the full potential equations can be extracted. In conclusion, these equations can be linearized to yield the linearized potential equations.[2]

It is a widespread belief amid visual researchers that solutions to scientific and even clinical problems unsolved until today, could be achieved through intense interaction between cooperation between scientists of diverse scientific background. Towards this direction many multidisciplinary academic programs and scientific projects are organized in order to establish a better base of understanding between medical doctors, mathematicians, physicists etc.

This type of approach has provided valuable outcomes regarding issues in cardiology such as atherogenesis[3] or artificial implants performance (stents).[4][5] Computer modeling of the blood vessels is considered to have the potential to drastically alter 21st century cardiovascular research.

Figure 2: Simulation of blood flow within the aortic system.

During the last years, lots of efforts are attempted to connect the CFD science with other fields of medicine including ophthalmology.[6][7][8]

In ophthalmology computational fluid dynamics (CFD) can easily applied for the investigation of aqueous humor and vitreous body behavior and partially crystalline lens.[9][10] The above mentioned structures enforce eye’s stability keeping and in addition are involved in pathologic conditions such as glaucoma and vitreoretinal disorders. 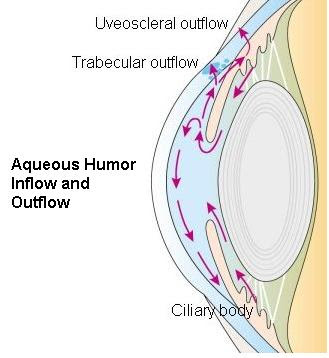 Aqueous humour is constantly produced and this pace of production should be balanced by an equivalent rate of drainage. Little variations in the production or outflow of aqueous humour will have a great impact on the intraocular pressure. The maximum resistance to aqueous flow is provided by the trabecular meshwork, and this is where the majority of the aqueous outflow occurs. The secondary route is the uveoscleral one, and is independent of the intraocular pressure, the aqueous flows through here, but to a minor degree than through the trabecular meshwork.

There is a number of queries regarding the aqueous humor that remain intricate to understand. An exceptional paradigm is glaucoma pathophysiology.[11]

Glaucoma is unique between the ophthalmic diseases because its clinical management and basic pathophysiology requires comprehension of ocular structures of both the anterior and posterior segment.[12] In the normal eye, there is a fragile balance between the inflow and outflow of aqueous.[13] When the outflow is blocked, the intraocular pressure increases, causing optic nerve damage.[14] This process is recognized as glaucoma. Even if intraocular pressure (IOP) was excluded of the definition of glaucoma, it should remain as a causal risk factor for the development and progression of glaucoma. Increased IOP is related with increased resistance to aqueous humor outflow, whilst the rate of aqueous humor formation is no different from that in normal (non glaucomatous) individuals.[15][16] These remarks led to the call for for more deep understanding of aqueous humor properties and the inexorable support of Computational Fluid Dynamics. 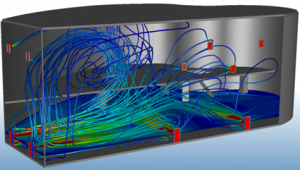 With regards to several parameters of the human eye, researchers attempted to present the characteristics of aqueous humor out flow in the anterior chamber of the eye.[17] They concluded that the physical mechanisms responsible for causing such flows may be classified as follows:

A variety of useful results and perhaps clinical tools could be retrieved such as:

For the realization of the particular study the scientists used the FEMLAB©, a commercial limited element equation solver, solving the full Navier–Stokes equations and corresponding total coupled convection/diffusion problem.

Figure 4. Cofiguration of iris in open and narrow angles

The results compare favorably with clinical observations, supporting the hypothesis that passive iris deformation can produce the iris contours observed using ultrasound biomicroscopy. In order to develop the model, researchers calculated a maximum Reynolds number of 0.01 in the aqueous humor under steady-state conditions, consistent with Friedland’s earlier estimate. However, in transient phenomena, such as blinking, the rapid movement of the boundaries causes the acceleration of the fluid to become significant, requiring the use of the full Navier–Stokes equations. Experiments on the bovine iris have shown that the tissue is incompressible and linearly elastic under small deformations with a Young’s modulus, E, of 27 kPa in the radial direction. These measurements support the use of the incompressible linear elastic equations to model the iris. Although the supposed rest position of the iris is on the crystalline lens, hydrodynamics of the aqueous humor force the iris away from the lens surface.

A lot of attention gathered the function of trabecular meshwork in the flow of aqueous humor. 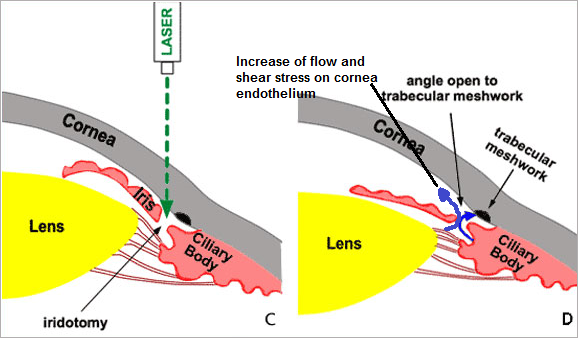 The effect of shear stress was also examined on human corneal endothelial cells (HCECs) grown on microscope slides. Conclusion of the study was that shear stress exerted on HCECs after LI may reach a scale adequate to cause cell damage and loss in eyes, especially in those with shallow anterior chambers.

It is obvious from the numerous studies that a large effort is taking place in order to use CFD in order to understand the glaucoma pathophysiology[23] as well as to evaluate the therapeutic options for the disease.[24] 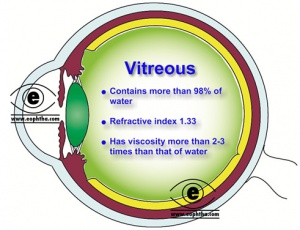 The vitreous is the translucent, colorless, gelatinous mass that fills the space between the lens of the eye and the retina lining the back of the eye. It is produced by certain retinal cells. It is of quite comparable composition to the cornea, but contains very few cells (mostly phagocytes which remove unwanted cellular debris in the visual field, as well as the hyalocytes of Balazs of the surface of the vitreous, which reprocess the hyaluronic acid), no blood vessels, and 98-99% of its volume is water (as opposed to 75% in the cornea) with salts, sugars, vitrosin (a type of collagen), a network of collagen type II fibers with the glycosaminoglycan hyaluronic acid, and also a broad range of proteins. Astoundingly, with so slight solid matter, it firmly holds the eye. However, the vitreous has a viscosity two to four times that of water, giving it a gelatinous consistency. (Figure 7 & 8)

It has a refractive index of 1.336. Although the vitreous is in contact with the retina and helps to keep it in place by pressing it against the choroid, it does not adhere to the retina, except in three places: around the anterior border of the retina; in the macula, and at the optic nerve disc. Unlike the fluid in the frontal parts of the eye (aqueous humour) which is endlessly replenished, the gel in the vitreous chamber is stagnant. Therefore, if blood, cells or other byproducts of inflammation get into the vitreous, they will stay there. If the vitreous pulls away from the retina, it is known as a vitreous detachment. As we age, the vitreous often liquefies and may collapse. This is more likely to happen in eyes that are nearsighted. It can also occur after injuries to the eye or uveitis.

The current trend regarding management of disorders as macular edema, age-related macular degeneration and diabetic retinopathy is intravitreal injection of pharmaceutical agents.[25][26] Many studies have conducted relating to the kinetics of such preparations aiming to elucidate the exact behavior of the agents inside the posterior segment.

Crystalline lensand and ciliary body are also structures that can be investigated by CFD . The lens is a transparent, biconvex structure in the eye that, in conjunction with the cornea, helps to refract light to be focused on the retina. The lens changes the focal distance of the eye so that it can focus on objects at various distances (accommodation).[29] Is also known as the aquula (Latin, a little stream, dim. of aqua, water) or crystalline lens.

In humans, the refractive power of the lens in its natural environment is roughly 18 dioptres, about one-third of the eye's total power. The ciliary body is the circumferential tissue inside the eye composed of the ciliary muscle and ciliary processes. It is triangular in horizontal section and is coated by a double layer, the ciliary epithelium. This epithelium generates the aqueous humor.

Another field of CFD application in ophthalmology is the investigation of accommodation. Accommodation acts like a reflex, but can also be consciously controlled. Mammals, birds and reptiles vary the optical power by changing the form of the elastic lens using the ciliary body (in humans up to 15 diopters). (Video 1) Fish and amphibians vary the power by changing the distance between a rigid lens and the retina with muscles.[31] The young human eye can change focus from distance to 7 cm from the eye in 350 milliseconds.

This remarkable alteration in focal power of the eye of approximately 12 diopters occurs as a consequence of a reduction in zonular tension induced by ciliary muscle contraction. The amplitude of accommodation declines with age (presbyopia). 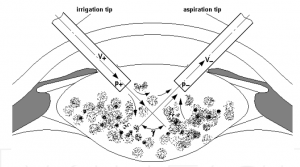 Finally, a promising ground for CFD application could be the study of fluidics during phacoemulsification and in cataract surgery in general. (Figure 9)