Gyrate Atrophy of the choroid and the retina is recognized by the following codes as per the International Classification of Diseases (ICD) nomenclature: 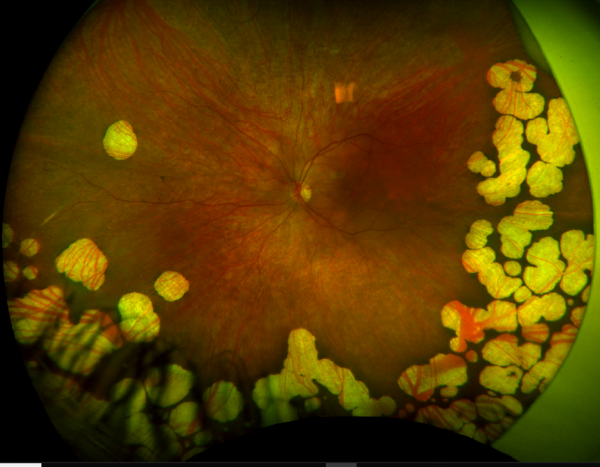 Figure 1. Widefield fundus photography showing early gyrate atrophy with characteristic scattered chorioretinal lesions in the periphery. An important differential is paving stone degeneration, which however usually does not extend posteriorly beyond the equator. Photo courtesy of Dr. Marc Mathias, MD 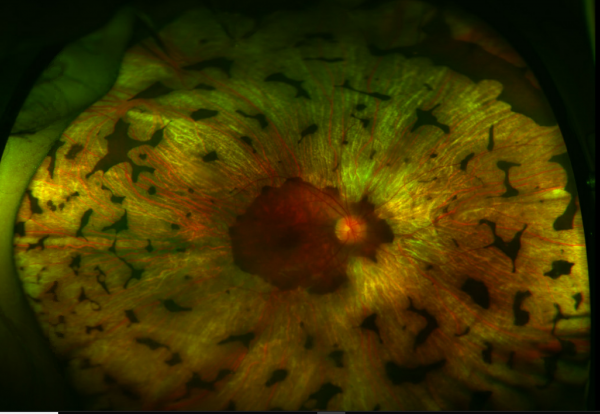 Figure 2. Widefield fundus photography (Optos) showing an advanced case of gyrate atrophy. Previously circular atrophic lesions have coalesced to form a large confluent area of atrophy with islands of the preserved retina and late preservation of the macula. Note the hyperpigmentation of the macula. Photo courtesy of Dr. Marc Mathias, MD.

Gyrate Atrophy of the choroida and the retina is a rare autosomal recessive retinal dystrophy characterized by progressive chorioretinal degeneration, early cataract formation and myopia. It is caused by a deficiency in the enzyme ornithine aminotransferase (OAT), which results in a 10- to 20-fold increase in plasma ornithine concentrations.  Patients classically present in the first decade of life with nyctalopia, with fundus exam revealing characteristic circular patches of chorioretinal atrophy distributed in the peripheral fundus (Figure 1).  As the disease progresses, the atrophic lesions coalesce and advance centripetally toward the posterior pole[1] (Figure 2), correlating with progressive loss of peripheral vision. Macular involvement occurs late in the disease.

Approximately 200 biochemically confirmed cases have been reported in the literature. The highest rate is in Finland with one case per 50,000 individuals. [2] There is no predilection for gender. [3]

Gyrate Atrophy is due to various mutations in the OAT gene, which is found on chromosome 10q26. Inheritance is autosomal recessive.[4] More than 50 variants have been identified, with missense mutations occurring most frequently. [5][6] These mutations lead to truncation of the enzyme ornithine aminotransferase, causing protein degradation. A subset of patients carry a genetic variant that is favorably responsive to supplementation with co-factor pyridoxine (vitamin B6), which has been shown to partially restore the function of the OAT enzyme. [7] [8] [9][10]

The underlying biochemical defect of gyrate atrophy is in ornithine aminotransferase (OAT), a vitamin B6-dependent mitochondrial matrix enzyme. OAT catalyzes the conversion of L-ornithine, a non-proteinaceous amino acid, to proline and glutamic acid, serving in the exchange of molecules between the urea and Kreb’s cycle. OAT plays a critical role in cellular detoxiﬁcation by disposing of ornithine derived from dietary arginine. [11][12][13][14] A deficiency of OAT thus leads to ornithine accumulation, with levels 10-to 20-fold above normal. [4]

The mechanism by which a deﬁciency of OAT and the consequent accumulation of ornithine lead to the chorioretinal degeneration is not fully understood. Possibilities include a direct toxic effect of the accumulated ornithine or one of its metabolites. Indeed, animal models have shown that intravitreal injections of ornithine induced the development of degeneration similar to that observed in gyrate atrophy. [15] It has been suggested that the retinal pigment epithelium (RPE) is the site of the initial insult due to its reliance on OAT activity for metabolic functions. RPE injury then leads to a breakdown of the outer blood retinal barrier causing photoreceptor cell exposure to toxic agents from choroidal circulation. [16]

Historically, other theories proposed that damage to the retina might occur secondary to high ornithine concentrations inhibiting creatine biosynthesis, a key agent in cellular energy storage. [17][18] However, creatine supplementation has not been proven to slow retinal disease and its role in pathogenesis remains unclear. [19] 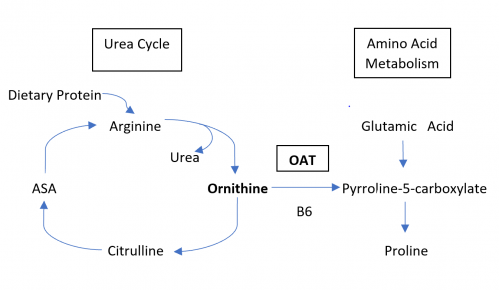 Histology of atrophic lesions shows complete absence of outer retina, RPE, choriocapillaris, and many of the medium and large choroidal vessels. Directly adjacent to the atrophic areas, there is focal photoreceptor atrophy with underlying hyperplastic RPE. [20]

Gyrate Atrophy of the choroid and the retina is largely a clinical diagnosis based on history and examination.  Elevated levels of systemic ornithine and genetic sequencing confirm the diagnosis.

Patients initially present with myopia and nyctalopia that begins in late childhood.  As the disease progresses in the second decade of life, patients report progressive loss of peripheral vision.  Visually significant posterior subcapsular cataracts develop early in virtually all patients, frequently by the second decade of life. [21] Vision loss secondary to cystoid macular edema is common. [16]

Fundus examination early in the disease course shows bilateral patchy, sharply demarcated circular areas of chorioretinal atrophy with hyperpigmented margins in the mid to far periphery (Figure 1). [2] Typically, during the second decade of life, the peripheral atrophic lesions coalesce and spread toward the posterior pole, forming a confluent lesion with a scalloped border at the junction of healthy and diseased retinal pigment epithelium (Figure 2).  The remaining healthy RPE in uninvolved areas is hyperpigmented, distinguishing this disease from choroideremia.

The macula and thus central vision is spared until late in the disease course, often preserved into the fourth or fifth decade of life.    In a study of 21 patients with long-term follow up and serial fundus angiography, 8 (38%) had macular distribution of the atrophy. [22]

Non-ocular findings include mild cognitive impairment, delayed language development and speech defects. [23] MR imaging has shown up to 70% have premature atrophic changes in the brain . [24] Other findings include thin, sparse hair and muscular atrophy. [25] There is progressive atrophy of skeletal muscle fibers (specifically type II) both radiographically and histologically, [26][27] although most patients deny muscular symptoms.

Levels of ornithine have been reported to be 10 to 20 times higher than normal in plasma, urine, spinal fluid, and aqueous humor. [4] Gene sequencing analysis is helpful in confirming and identifying the allelic variant. [28]

Serial fundus photography, especially wide field fundus photography, is useful in monitoring progression of disease. In a study of two related patients with an unrestricted diet and photos taken 24 months apart, younger age and smaller lesion sizes at baseline were associated with a significantly faster rate of chorioretinal degeneration. [30] 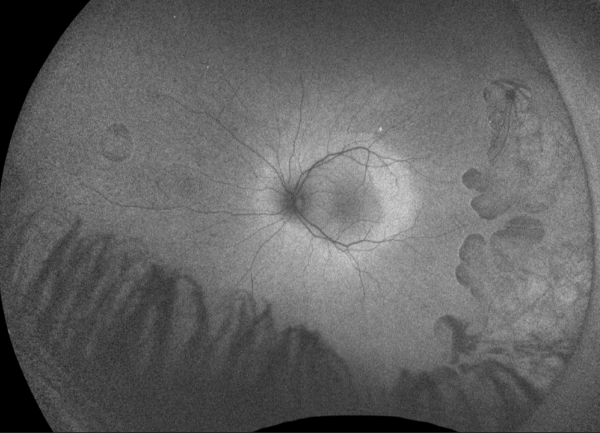 Depending on the disease severity, fundus autofluorescence shows either focal or confluent areas of absent autofluorescence, which corresponds with the areas of chorioretinal atrophy seen on fundus exam. These atrophic lesions are commonly surrounded by a sharply demarcated hyperautofluorescent perimeter. The remaining unaffected area, which typically includes the macula, is normal. [16]

The IS/OS junction is typically preserved in the regions where autoﬂuorescence signal is normal or increased. In the periphery, extensive loss of IS/OS junction, RPE and inner choroid reﬂectivity, accompanied by signiﬁcant thinning of both inner and outer retina are often observed concurrently.

Cystoid macular edema is frequent, presumed to be due to impairment of the blood-retinal barrier. The largest case series with SD-OCT imaging showed all 7 (100%) patients were found to have multiple intraretinal cystoid changes and thickening of the fovea. [16] However, it is important to note whether there is petaloid leak at the macula in late phase of fundus fluorescein angiogram. In the presence of vertical tissue bridges, hyporeflective spaces in the retina on SD-OCT, the term foveschisis is used.[1] Macular hole[31] and epiretinal membrane are other possible macular involvement in the gyrate atrophy of the choroid and the retina.

Other findings in advanced disease can include deposits of retinal gliosis, outer retinal tubulation and choroidal neovascularization. [16][32][33]

ERG abnormalities are present at an early stage of the disease, with impaired rod and cone responses, ultimately progressing to a completely extinguished response. [34] Median ERG half-life is 16.0 years (standard combined response) and 10.7 years (ﬂicker response). [35]

There is no curative regimen for gyrate atrophy. Lowering the elevated systemic ornithine is presumed to slow disease progression, but the utility of such measures is difficult to prove due to the disease's rarity and slow rate of change.

Refraction and low vision aid should be tried to improve vision and associated quality of life. Examination of the fundus of family members is also important.

Whereas small case series and anecdotal evidence on human subjects suggest that correction of hyperornithinemia seems to be beneficial, animal models have been more definitive in providing histopathologic evidence that early treatment alters the natural history of the disease:

There is no consensus regarding treatment of CME. Single case reports have shown improvement with sub-tenon injection of triamcinolone acetonide [46], dexamethasone implantation [47], intravitreal bevacizumab[48], and topical NSAIDs. [49] There is no clear data regarding the utility of systemic carbonic anhydrase inhibitors. One study has shown improvement in two patients with a low-protein, arginine-restricted diet. [50] As mentioned earlier, if is important to differentiate CME from foveoschisis[1] which doe not cause leak of fluorescein on fluorescein angiogram (FA). Typically, CME with peraloid leak on FA responds better to intravitreal/periocular steroid injections, whereas for foveoschisis dozolamide drops and/or acetazolamide tablets are preferred.

Cataracts typically occur by the second decade of life, frequently requiring surgical intervention by the third decade of life. Posterior subcapsular and posterior sutural cataracts are most common. [21] A case series of four eyes reported zonular weakness in all four eyes. [51]

Vision loss is slow and progressive. Considerable variability is observed both in the age at which visual acuities begin to decrease and the age at which visual acuities reach 20/200. Without cataract surgery, the percentage of eyes with acuity 20/200 or worse has been reported as 37% at age 30 and 64% at age 40. In patients with history of cataract surgery, this rate decreased to 20% at age 40. [2] The median visual field half-life of 17.0 years for static perimetry and 11.4 years for kinetic perimetry. [35]

There are no known ongoing clinical trials. As with many of the inherited retinal dystrophies, gene therapy is a promising emerging technology. [52]