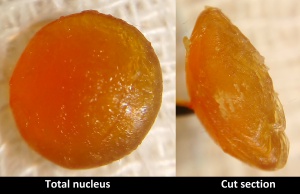 Nucleus of hypermature cataract after ECCE

The contemporary MSICS technique most commonly employed is based on the method that Ruit et al first described in 1999.[2] However, in 1992 Blumenthal described a technique of manual ECCE[4] that served as a basis for later developments in MSICS. 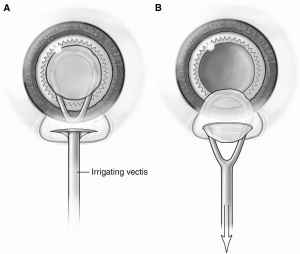 Irrigating Vectis use to remove cataract © 2015 American Academy of Ophthalmology

In 1999, Ruit and colleagues described a new MSICS technique based on their experience at Tilganga Eye Centre in Kathmandu, Nepal:[2][3]

In order to make this technique sustainable in the developing world, additional innovations included the local manufacture of high-quality posterior chamber intraocular lenses for US$7 each, the development of a low-cost operating microscope (US$3000) and the development of a low-cost yttrium aluminium garnet laser (US$1200). The authors reported that average operative time was under 10 minutes and the average cost was less than $20 per surgery.[3]

More recently, authors have suggested modifications to the Ruit technique:[9]

It is also noted that MSICS can be done in concert with trabeculectomy in a combined cataract-glaucoma operation using the superior conjunctival flap.[9]

In their first report on MSICS outcomes, Ruit and colleagues analyzed data from 62 consecutive cases performed at Tilganga Eye Centre in Kathmandu, Nepal and 207 cases from a remote eye camp in rural Nepal.[2] The authors reported that 87.1% of patients from Tilganga had best-corrected visual acuity (BCVA) of 20/60 or better. Approximately 50% of patients at the rural eye camp had a preoperative visual acuity of counting fingers at 2 feet or worse and 74.1% had BCVA 20/60 or better at two months postoperatively. As familiarity with the MSICS technique has improved so have outcomes. In a 2007 report from the Tilganga Eye Centre, 85% of patients undergoing MSICS had an uncorrected visual acuity (UCVA) of 20/60 or better and 98% had BCVA of at least 20/60.[5]

Approximately 39 million people are blind worldwide.[11] According to a 2004 World Health Organization report, 47.8% of blindness worldwide is due to cataract.[12] Of the disability-adjusted life years due to cataract more than 90% are in the developing world.[13] Cost of surgery and lack of awareness are the most commonly cited barriers to patients obtaining surgery in developing countries (Tabin 2005). Accordingly, solutions are needed to provide high-volume, low-cost cataract surgery. Investigations have consistently demonstrated similar visual outcomes and complication rates between phacoemulsification and MSICS, while MSICS is considerably faster, less expensive and less dependent on expensive technology than phacoemulsification.[14] Additionally, some authors have even suggested that MSICS (or ECCE) may be preferred over phacoemulsification for very hard cataracts, which are frequently encountered in resource-poor settings.[15][14]


MSICS appears to offer a promising avenue for increasing surgical coverage in resource-poor areas of the world without sacrificing clinical outcomes.