The Mittendorf dot, an embryologic remnant of the hyaloid artery, is an exam finding of a posterior lens capsule circular opacity that is most commonly visually insignificant. 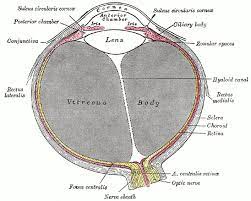 The Mittendorf dot, discovered by William Frederick Mitttendorf, is a congenital vascular abnormality which occurs due to an involutional defect of the anterior terminus of anterior hyaloid artery. It manifests as a focal opacity in the infero-nasal aspect of the posterior lens capsule. It is a clinical variant of persistent fetal vasculature (PFV), a spectrum of conditions that arise when fetal hyaloid vasculature fails to involute. The Mittendorf dot is thought to be attached to the posterior lens capsule itself; recent evidence, however, shows the possibility of a retrolental presence of the dot in the anterior vitreous. The evidence suggests that the Mittendorf dot can in fact be located posterior to Erggelet’s space (retrolental space of burger)- the space between the posterior capsule and the vitreous as depicted in the illustration below. A lone Mittendorf dot is a relatively benign finding rarely causing visual impairment.

The hyaloid artery is a transient vessel that extends from the optic disc to the posterior pole of the lens during fetal development. A dense network of intraocular vessels branch from the hyaloid artery and proliferate during early embryogenesis in order to supply the developing ocular tissues and contribute to the primary vitreous. This hyaloid vasculature ultimately begins to involute at two to three months gestation, coinciding with the development of the retinal vasculature. Following involution, the perivascular sheath of the hyaloid artery typically remains forming Cloquet’s canal. This is seen in the image below (figure 2). 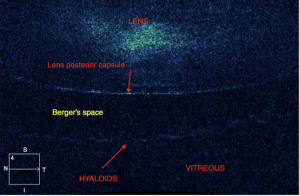 The underlying mechanism responsible for involution of this vascular system is theorized to involve apoptosis via a combination of macrophage activation and cessation of blood flow to the hyaloid artery and its branches. The cellular signaling that leads to macrophage activation has yet to be elucidated.

Mittendorf dot develops when the anterior terminus of the hyaloid artery fails to involute leaving behind an embryologic remnant. The proposed mechanisms causing persistent fetal vasculature involves improper gene expression of a number of molecules and growth factors including, but not limited to, vascular endothelial growth factor (VEGF), fibroblast growth factor (FGF), angiopoietin 2, Arf tumor suppressor gene, and collagen 18. This remains an active area of research.

== Physical examination == [6][1] A Mittendorf dot, due to the nature of its origin, may be diagnosed and characterized upon direct visualization during slit lamp examination.

In cases where direct visualization is precluded, computed tomography (CT), magnetic resonance imaging (MRI), intravenous fluorescein angiography, or ultrasonography are other techniques which can be utilized to visualize the pathology.

Upon physical examination, a Mittendorf dot may be seen in the inferonasal quadrant on the posterior lens capsule. It is apt to be overlooked due to its small size and general lack of symptoms.

The prognosis for Mittendorf dot is excellent as the embryologic remnant is not typically visually significant and does not progress. The Mittendorf dot should be monitored with ophthalmologic examinations including gonioscopy of the anterior chamber at regular intervals. For premature infants, up to 95% can demonstrate some form of hyaloid remnants including Mittendorf dots which usually disappear as the infant matures. Persistence of hyaloid remnants remains low at approximately 3%. Intervention is rarely necessitated.