Amyloidosis is a diverse, heterogeneous group of disorders characterized by the deposition of hyaline extracellular material into various tissues throughout the body including the eye and ocular adnexa. Ocular Amyloidosis has been reported in almost every part of the eye as well as adnexal and orbital tissues. Although amyloidosis may be suspected clinically, classic histopathological charcteristics can be identified on tissue biopsy for definitive diagnosis. In recent years, concentration has been directed towards standardization of nomenclature given the proliferation of amyloidosis type-specific treatment regimens.

Mathias Schleiden, a German botanist, first used the term “amyloid” in 1838 in his description of plant histology. Shortly thereafter, Virchow began contemporary medical use of this term in neuroanatomy as well as described its diffuse and characteristic extracellular tissue protein deposits observed by light microscopy in liver autopsies.[1] Congo Red dye was first described by Benhold in 1922, with its pathognomonic birefringence described by Divry in 1927.[2] A description of its fibril proteins followed in 1971 by Cohen and Calkins.[3]

Amyloidosis is a diverse, heterogeneous group of disorders characterized by the deposition of hyaline extracellular material into various tissues throughout the body including the eye and ocular adnexa.[4] The amyloid proteins are deposited as insoluble fibrils as a consequence of abnormal protein folding,[1] detected on electron microscopy as nonbranching, rigid, and mostly extracellular. Binding of the Congo Red dye in addition to the “apple green” birefringence on polarized light microscopy are diagnostic.[1]

Ocular involvement of amyloidosis has been reported in multiple compartments, including the adnexa, extraocular muscles, levator palpebrae muscle, conjunctiva, cornea, lens and capsule, anterior uvea and trabecular meshwork, as well as vitreous and retina.

Definition and classification of the set of diseases included in amyloidosis continues to be refined. The International Society of Amyloidosis has released several revised nomenclature recommendations as recently as 2010 and 2012.

Historical guidelines promoted a classification system based on clinical presentation and consisted of four primary subtypes:[5]

While this naming system is still occasionally used, with advances in protein sequence analysis, recent guidelines recommend greater classification based on the specific precursor (A-) of each individual amyloid protein (abbreviated).[1][5][6][7] For example, transthyretin amyloidosis is described as ATTR amyloidosis, with specific mutations being further designated, e.g. ATTRV30M.5 According to the official 2012 guidelines, mutations are named “according to the substitution or deletion in the mature protein,”[1] meaning that ATTRV30M describes the most common transthyretin amyloidotic variant protein with a substitution of methionine for valine at residue 30.[2]

Standardization of nomenclature is of critical importance given continually evolving amyloidosis type-specific treatment regimens.[5][8] Nomenclature guidelines are reviewed biennially by the International Society of Amyloidosis and are published in Amyloid, the official journal of the International Society of Amyloidosis. The 2012 guidelines describe 30 distinct human and 10 animal fibril proteins.[1] To be included on this list, a protein “must have been unambiguously characterized by protein analysis,” and “described in a peer review journal.”

Initial patient presentation of ocular amyloidosis may be a mass lesion of unknown origin. These mass lesions can resemble or occur secondary to malignant processes. A case series performed by Aryasit et al. demonstrated that a mass lesion was the presenting feature in 5 out of 6 patients (83.3%).[9] Therefore, these lesions should be followed and likely warrant a biopsy for pathologic diagnosis.

Symptoms of nephrotic-range proteinuria (nondiabetic), cardiomyopathy (no ischemic history), hepatomegaly (no contrast dye filling defect by imaging) and/or peripheral neuropathy (nondiabetic) should prompt an investigation for extraocular amyloidosis.[10] Diagnosis can be narrowed and confirmed with a combination of additional tests including but not limited to urine/serum examination for monoclonal proteins, subcutaneous fat aspirate, bone marrow biopsy, rectal biopsy, 2D Doppler echocardiography, electrocardiography and skeletal survey.[9][10]

Biopsy with histological examination is diagnostic. Common staining characteristics listed below are described in the Basic and Clinical Science Course, Section 8: Cornea and External Disease:[3]

Orbital amyloidosis is frequently benign, localized, and associated with primary disease.[9][11][12][13] Lacrimal gland involvement can be unilateral or bilateral.[13]Signs and symptoms commonly involve mass/tissue infiltration, ptosis, diplopia, irritation and epiphoria and can mimic other orbital masses and diseases leading to delayed diagnosis.[11][12][14][15][16]

Amyloid deposits in the levator palpebrae muscle commonly presents with ptosis and may precede other orbital or conjunctival signs for several years.[14]

Optic neuropathy (compressive or infiltrative) is uncommon but has been reported with documented visual field loss.[17] 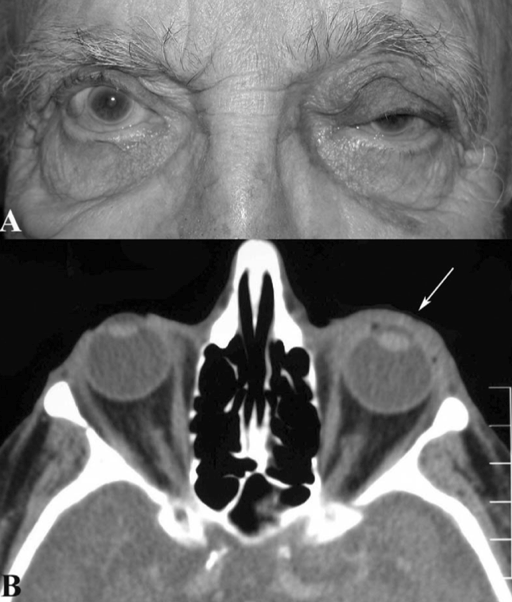 A review of conjunctival specimens sent for pathological examination by Grossniklaus and colleagues showed only 5 of 2,455 (0.002%) specimens were positive for amyloidosis.[18] Conjunctival amyloidosis most commonly presents as a primary, localized process,[3] although in some cases may represent systemic amyloidosis.[19] 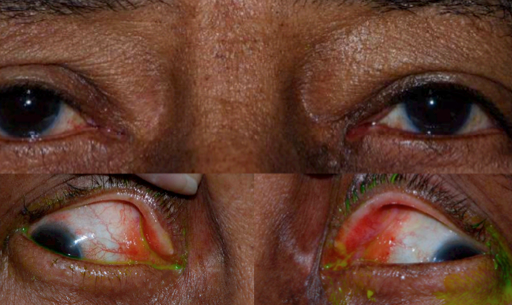 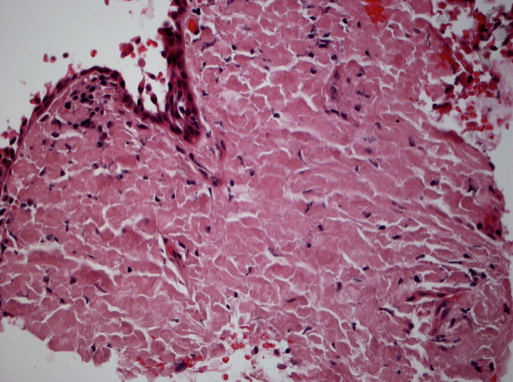 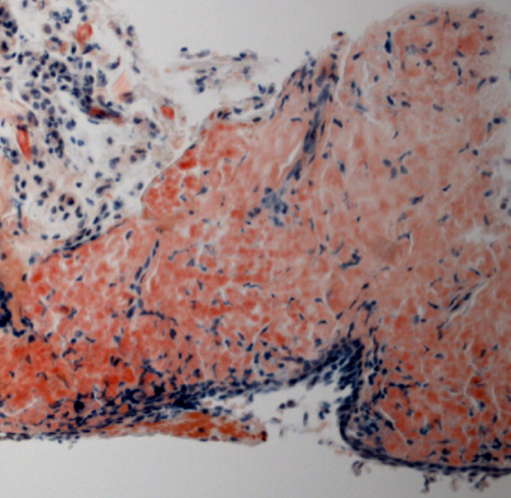 Corneal amyloidosis is demonstrated in several of the corneal dystrophies.[3]

Incidence of secondary glaucoma in amyloidotic subtypes has been reported from 17% (Val30Met) to 100% (Ser50Ile, Val30Met, Arg104His).[24] Amyloid involvement of the aqueous humor can resemble anterior uveitis, suggesting a role for aqueous tap and analysis prior to initiating topical steroids.[23]

Vitreous amyloidosis is classically described as “initially granular with wispy fringes,” growing in size and aggregating to form a “glass wool appearance.”[25] It is frequently visually significant, differentiating it from more common non-hemorrhagic vitreous opacities such as asteroid hyalosis. Deposits are bilateral in most cases, although can be asymmetric or unilateral.[26] Focal arteriolar sheathing may occur in the absence of vitreous involvement,[27] however most cases show an initial retinal tuft adjacent to retinal vessels followed by secondary vitreous involvement.[25] Within the retina, histopathology shows amyloid deposition within the retinal arteriolar walls and “among the photoreceptor inner and outer segments.”[26] In transthyretin-related familial amyloidotic polyneuropathy, the retinal pigment epithelium (RPE), along with the liver, synthesizes mutant amyloidogenic transthyretin protein making the RPE a potential target for treating cases of ocular amyloidosis.[27] Vitreous involvement is most often seen in systemic amyloidosis, although isolated disease has been reported.[24][26][28][29] 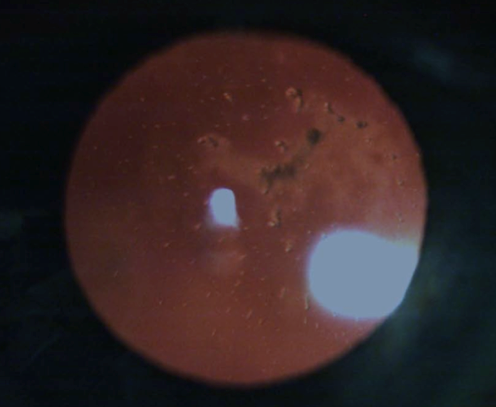 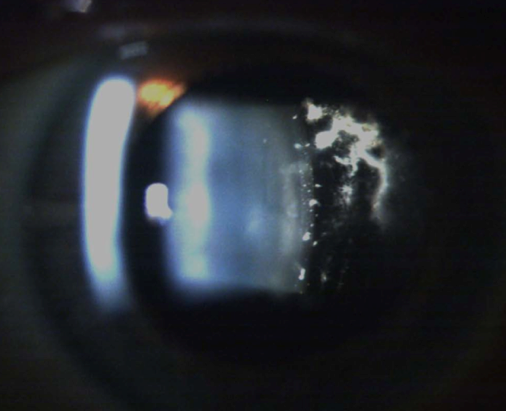 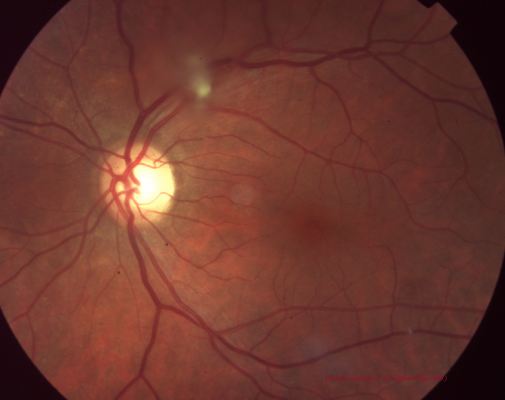 Extraocular (orbital) amyloidosis is rare. A recent case report of two patients noted biopsy-proven amyloid lacrimal gland involvement.[13] Excision can be attempted, however complete excision of the lacrimal gland can be surgically challenging. There is no conclusive evidence in the literature to recommend complete surgical excision vs. biopsy and observation.

Conjunctival lesions are often conservatively managed with observation or lubrication with artificial tears or gels. If recalcitrant, local excision or surgical debulking may be performed. Demirci et al. reported only a 27% recurrence rate after surgical debulking.[19] A recent article by Fraunfelder enumerated the benefits of liquid nitrogen cryotherapy for conjunctival amyloidosis.[30] The mechanism of action for cryotherapy is speculated to involve induced ischemia of the amyloidotic conjunctiva secondary to damage to small blood vessels. In this report, none of the four study patients demonstrated any systemic signs of amyloidosis. Three of the patients underwent surgical debulking prior to liquid nitrogen cryotherapy, which was applied at the base of the surgical excision site. All participants had relatively good initial symptomatic results; however, two showed recurrence of conjunctival amyloid mass lesions that were subsequently treated with additional adjunctive cryotherapy. Although reports of cryotherapy for conjunctival amyloidosis demonstrate it to be a safe and relatively effective therapeutic option, further study is warranted.

Treatment of increased IOP from amyloid-related secondary glaucoma can be challenging even with maximal topical therapy. Previous studies have demonstrated that IOP may be lowered to satisfactory levels by trabeculectomy,[24] however the effect may be temporary with resultant increases in pressure after several months. Dry eye, friable amyloidotic conjunctiva, angle closure, and diffuse infiltration of the trabecular meshwork by amyloid have been proposed to contribute to postoperative bleb failure and unsatisfactory IOP.[22][31] Tube shunts have been suggested as another treatment for amyloidosis related secondary glaucoma,[22] however they have not yet been reported in the literature. In recalcitrant cases after trabeculectomy, cyclophotocoagulation can be used to further lower IOP to tolerable levels.

Based on the theory that the RPE is responsible for production of amyloidogenic transthyretin, panretinal photocoagulation (PRP) is being investigated as a possible therapy for recurrence of vitreous amyloidosis deposits. An initial report of two patients demonstrated a decrease in both vitreous and retinal amyloid deposits in the PRP-treated eyes without significant complications.[27]

Treatment of systemic amyloidosis should be based on the specific amyloidosis mutation type. Therapy may be targeted at the infectious or inflammatory causes in secondary amyloidosis, at the bone marrow production and plasma cell dyscrasia in primary amyloidosis, or disease specific alterations in dialysis in patients with renal involvement. Hereditary forms of amyloidosis may require liver transplantation to stop the production of mutant amyloid, however this may worsen the ocular amyloidosis.

A number of investigative and novel therapies are currently being designed. These include tafamidis, a small molecule stabilizer of the transthyretin tetramer, which is currently being used in Europe to slow the progression of neuropathy.[38] Other agents have been designed to interfere with fibril formation, inhibit amyloid precursors, and enhance degradation of existing amyloid deposits. IV infusions of siRNA formulations have shown in phase 1 trials to reduce both mutant and non-mutant transthyretin.[39] Additionally, new antisense oligonucleotides targeting hepatic production of mutant transthyretin have shown exciting results suppressing mRNA and serum TTR levels by as much as 80% in a transgenic mouse model.[8] These agents offer a promising future for potential treatments of amyloidosis.