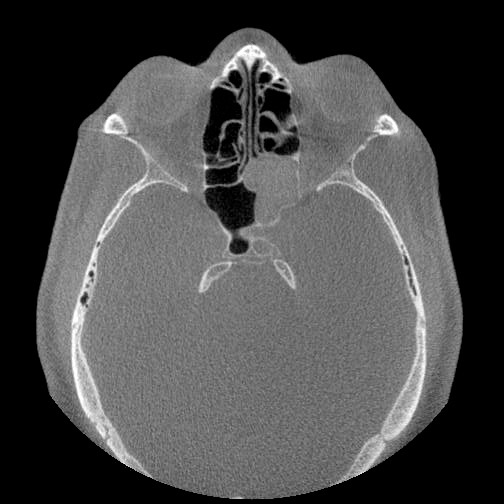 Aspergillosis and mucormycosis are the most common orbital fungal infections, while aspergillosis is the most common cause of paranasal mycoses. [1] Orbital mycoses typically occurs via extension from the paranasal sinuses, however, organisms can also gain access to the orbit from direct trauma or hematogenous spread from distant sites.[2]

Another important consideration is environmental exposure, such as to construction or demolition sites, from compost, and in endemic areas, such as Sudan and Saudi Arabia. For example, aspergilloma (ie “fungus ball”) is the leading cause of proptosis in Sudan.[6][7]

Aspergillosis is caused by the genus Aspergillus, which is a spore-forming, septate filamentous mold (See Figure 3). The two species, Aspergillus flavus and Aspergillus fumigatus, most commonly affect the orbit. Aspergillus thrives in warm, moist environments and often colonizes the respiratory tract without causing disease in immunocompetent individuals.

Orbital aspergillosis is divided into invasive and noninvasive forms with the former more common in immunocompromised patients. [6]

Prevention is targeted to those who are at higher risk of infection, including patients with a history of HIV/AIDS, organ transplantation, chronic chemotherapy, or hematologic malignancies. Certain populations may benefit from prophylactic antifungal therapy, but this is not standardized. Some suggest prevention in endemic areas or hospital construction zones by using masks and air supply treatment.[13] Increased awareness among healthcare providers is also integral in prevention and recognition.

The clinical history of orbital aspergillosis is nonspecific and can closely resemble several orbital inflammatory and neoplastic conditions (see differential diagnosis).[3] Because it depends on the immune status of the patient and the form of aspergillosis, the presentation is typically chronic and indolent in immunocompetent patients and more acute and progressive in immunocompromised patients. The most common chief complaints at presentation are pain, headache, and/or proptosis.[4][14][15] The description of the pain is often vague, usually in the retrobulbar area. Pain usually precedes ophthalmic findings and can become progressively severe. Patients with allergic fungal sinusitis commonly have a history of allergic rhinitis, nasal congestion, nasal polyps, or recurrent sinusitis and may not initially present with orbital signs or symptoms.

Acute invasive sino-orbital aspergillosis may present with signs characteristic of a bacterial cellulitis with periorbital inflammation that progresses to an orbital apex syndrome, presenting with ptosis, proptosis, painful ophthalmoplegia, and an optic neuropathy. Proptosis can also be seen in noninvasive aspergillosis secondary to expansion of the sinus cavities. Fulminant aspergillosis can resemble mucormycosis with invasion into the blood vessels with subsequent thrombosis and tissue necrosis with a black eschar in late stages. Alteration in mental status may suggest central nervous system invasion or indicate the presence of a contributing risk factor, like diabetic ketoacidosis.[13]

The most common presenting symptom of orbital aspergillosis is orbital and facial pain. Concomitant sinus involvement with congestion, rhinorrhea, epistaxis, and epiphora is often, but not always, present and contributes to the diagnostic challenges of this disease. Allergic fungal sinusitis patients do not usually present with orbital symptoms, but rather with symptoms of allergic rhinitis, chronic sinusitis and nasal obstruction.[8] Patients with aspergillomas may present with facial pain or symptoms secondary to chronic sinusitis. Invasive aspergillosis patients may present acutely or over a period of weeks to months and may report a wide range of symptoms including naso-orbital pain, headache, proptosis, epistaxis, and worsening vision.[7] 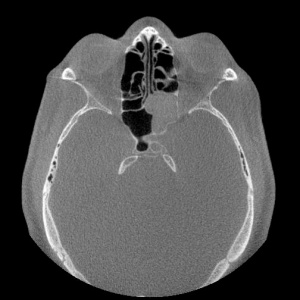 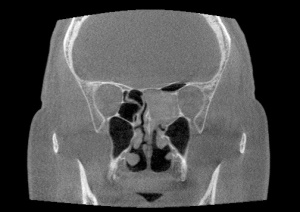 Computed tomography (CT) of the orbit is the initial imaging modality of choice for diagnosing and characterizing the extent of orbital aspergillosis, as it is quick and effective. Aspergillus appears as isodense, heterogenous lesions affecting the paranasal sinuses with calcification and bony erosion. The sphenoid sinus is the most commonly affected paranasal sinus, which is postulated to be related to its low oxygen content and acidic environment (Figures 1 and 2). The presence of patchy hyperattenuation is also considered an indirect indicator of fungal disease.[16] MRI reveals hypointense lesions on T1 and T2-weight images in contrast to neoplastic and bacterial lesions which are hypertense on T-2 weighted images.[8] MRI is generally preferred to CT in evaluating the orbital apex, cavernous sinus, and optic nerve changes. 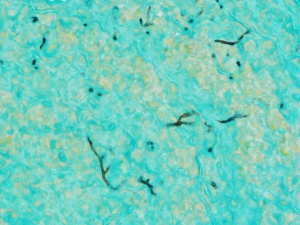 Incisional biopsy of both the center and periphery of the lesion for histopathology and microbiology is considered the gold standard for diagnosis. Aspergillus has a characteristic microscopic appearance as thin 2-3 𝜇m, septate hyphae with 45 degree branching, best seen on Gomori Methanamine silver and periodic acid Schiff stains (Figure 3).[15] Part of the biopsy should be sent for culture. If initial biopsy does not yield a diagnosis and suspicion remains high, then a second biopsy should be obtained, especially if considering corticosteroids. High rates of negative biopsies have been reported due to a tendency of the fungus to only appear in late-stage samples.[17]

Management of aspergillosis consists of reversal of any immunosuppression, aeration and drainage of the paranasal sinuses involved, and treatment with systemic antifungals. Surgical debridement of the orbit, sinuses and skull base with intravenous and local irrigation of antifungals may be necessary for widespread invasive disease.[20] In some cases, retrobulbar injection of amphotericin B can b considered.[21] [22] Unfortunately, orbital exenteration is occasionally necessary at the time of orbital debridement if severe retrobulbar or apical involvement is encountered, but this is growing increasingly unnecessary.[23]

Treatment of allergic aspergillosis involves surgical debridement of the involved sinuses concurrent with administration of systemic and topical corticosteroids. Systemic antifungals are not indicated unless the patient is immunocompromised.[24] In addition, patients with allergic aspergillosis may have nasolacrimal duct obstruction requiring surgical intervention in the future.

Similarly, management of Aspergilloma involves surgical debridement and aeration of the sinus involved without the need for antifungal therapy.[25]

Intravenous amphotericin B is considered the gold standard for medical treatment of sino-orbital aspergillosis. A lipid formulation of amphotericin B is available for patients with impaired renal function. Oral itraconazole is also commonly used as an alternative to or in combination with amphotericin B.[26] Oral voriconazole has also been shown to be equally effective as primary therapy with fewer side effects.[27] The maximum daily dosage of the chosen antifungal agent(s) is used until the disease is controlled, which is then followed by maintenance therapy with oral itraconazole.[28] Newer classes of antifungals such as lipid complex nystatin and echinocandins are starting to be used more widespread.