Orbital rhabdomyosarcoma is a malignant neoplasm often seen initially by ophthalmologists, in which prompt diagnosis can save the life of the affected individual. Rhabdomyosarcomas are composed of cells with histologic features of striated muscle in various stages of embryogenesis that can occur in several sites in the body, including the ocular region. Most ocular rhabdomyosarcomas arise in the soft tissues of the orbit but they can rarely occur in other ocular adnexal structures and even within the eye.

The average age of presentation for orbital rhabdomosarcomas is 7 to 8 years of age. While 70% occur in the first decade, it has been reported from birth to the seventh decade. In the orbit, some suggest a male predominance (1.3-1.6 to 1) and others indicate an equal sex distribution. There appears to be no difference based on race.

Microscopically, the four major histopathologic types of rhabdomyosarcoma are embryonal, alveolar, pleomorphic, and botryoid. The majority of orbital rhabdomyosarcomas are of the embryonal type, while the alveolar type is substantially less common. Embryonal types occur in childhood (mean age of presentation is 8 years), while alveolar types occur in adolescence and the rare pleomorphic type typically occurs in older individuals.

Rhabdomyosarcomas develop in the orbital soft tissues, rather than in the extraocular muscles, which supports the theory that the tissue of origin is pluripotential or undifferentiated mesenchyme cells. The embryonal type corresponds to developing muscle at the 7 to 10 week fetal stage, and the alveolar type to the hollow tube stage. The pleomorphic type usually presents in older adults and is believed to occur de novo as a consequence of dedifferentiation of developed adult muscle.

Most cases arise spontaneously, but the disease has been associated with familiar syndromes (Neurofibromatosis and Li-Fraumeni syndrome), the p53 tumor suppressor gene, and congenital malformations (Beckwith-Wiedemann syndrome). Occurrences as a second tumor with hereditary retinoblastoma have also been cited.

The orbit is the primary site for 10% of rhabdomyosarcomas. Other primary sites include genitourinary (22%), extremities (18%), parameningeal (16%), and other head and neck locations (10%), such as the scalp, face, buccal mucosa, oropharynx, larynx, and neck. Rhabdomyosarcomas can also invade the orbit by direct extension from the nasopharynx or the paranasal sinuses. Less commonly, ocular rhabdomyosarcomas can present in the conjunctiva, eyelid, or in the anterior uveal tract. Presentations in the eyelid and conjunctiva are rarely confined to these areas, but rather an extension from the anterior orbit (Fig. 1). 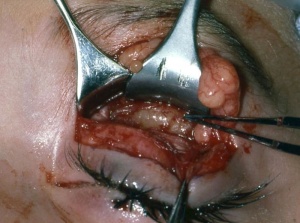 Fig. 1 Intraoperative view of an incisional biopsy via an eyelid crease incision. The mass extended into the eyelid as an extension of an anterior orbital tumor.

Patients generally present with proptosis (80-100%), globe displacement (80%), blepharoptosis (30-50%), conjunctival and eyelid swelling (60%), palpable mass (25%), ptosis (25%) and pain (10%) (Shields). Typically, orbital rhabdomyosarcomas present with rapidly developing unilateral exophthalmos over the course of weeks, however some cases may have a slower onset, with chronic eyelid and conjunctival edema being present before proptosis and globe displacement. Two thirds are superior or superonasal (Fig. 2), causing downward and outward displacement of the globe. Roughly ten percent arise from the paranasal sinuses (Fig. 3), nasal cavity, pterygopalatine fossa, and parapharyngeal space and secondarily invade the orbit, thus presenting with features of sinusitis, nasal obstruction, or epistaxis. Pain and decreased vision are minimal and are symptoms of more advanced disease. Epiphora is uncommon although nasolacrimal duct obstruction has been rarely reported.
While usually diagnosed due to the symptoms listed above, if allowed to progress, it can invade orbital bone and extend intracranially, producing neoplastic meningitis. Metastatic disease is rare, but it most often spreads hematogenously to bone and lung. The orbit contains few lymphatics, however anterior tumors in the conjunctiva and eyelid can metastasize to regional lymph nodes.

Obtaining a thorough history for the above symptoms, and performing a careful ocular examination in the office may assist in the diagnosis. Ophthalmoscopy may demonstrate choroidal folds, retinal venous tortuosity, and optic disc edema.

On CT scan (Fig. 3 & 4), the tumors appear as homogenous, well-circumscribed, round to ovoid masses, which are isodense to muscle. They are usually within the orbital soft tissues and do not appear to arise from the extraocular muscles. Earlier tumors do not invade bone, however larger tumors are less well defined and may erode bone and extend into the nasopharynx or sinuses. Areas of focal hemorrhage or necrosis may appear heterogeneous on CT scan. Rhabdomyosarcomas demonstrate moderate to marked contrast enhancement.
On MR T1-weighted imaging, the tumor appears hypointense compared with orbital fat, but isointense with respect to extraocular muscles. On T2-weighted imaging, the lesions are hyperintense to orbital fat and extraocular muscles. Areas of chronic hemorrhage may show focal areas of increased signal on T1- and T2-weighted images. They typically demonstrate moderate contrast enhancement with gadolinium injection, particularly with fat suppression. 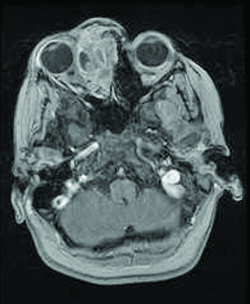 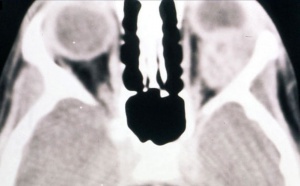 Biopsy is necessary to establish a diagnosis. Fine needle aspiration biopsy does not provide sufficient tissue. Based on the findings of clinical examination and imaging studies, the clinician must decide whether to perform an excisional or incisional biopsy. Excisional biopsy is appropriate if surgical removal can be achieved without significant damage to vital structures, such as the optic nerve and extraocular muscles. If the suspected rhabdomyosarcoma is large and located in the posterior orbit, making a complete excision difficult without damage to vital orbital structures, an incisional biopsy is appropriate. In both cases, after histopathologic confirmation, radiation and chemotherapy are administered.

Central to the diagnosis is the demonstration of rhabdomyoblasts via light microscopy, immunohistochemistry and/or electron microscopy.
The histopathologic classification favored by the Intergroup Rhabdomyosarcoma Study divides these tumors into embryonal, alveolar, undifferentiated, and anaplastic types. By light microscopy, the embryonal subtype, which makes up 80% of orbital rhabdomyosarcomas and presents most commonly in young children (mean age 7-8), is characterized by spindle-shaped cells in various stages of differentiation (Fig. 5 and 6) with highly eosinophilic cytoplasm (Fig. 6). The alveolar subtype exhibits small, round, densely appearing cells that are loosely arranged, with septae that are similar to the alveoli of the lung. The botryoid variant of embryonal rhabdomyosarcoma, seen most commonly in infants, is defined by the presence of subepithelial aggregates of tumor cells and is named due to the common “grape-like” appearance of these cells. Immunohistochemisty is useful in identifying skeletal muscle proteins, such as alpha-actin, myosin, desmin and myoglobin. Electron microscopy can favor the diagnosis by demonstrating actin-myosin bundles or the A, I or Z band proteins, specific to muscle. 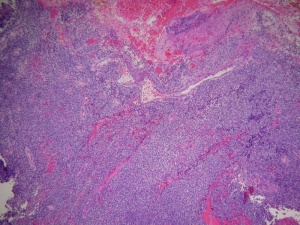 Fig 5. Hematoxylin and eosin stain, 40X magnification, showing sheets of round and spindle shaped cells at various stages of differentiation. 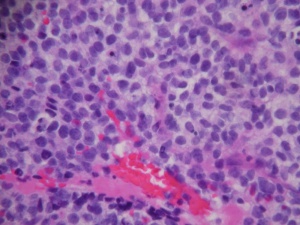 Orbital exenteration was considered the treatment of choice up until the 1960s; however, the mortality rate was roughly 70%. Today, the goal of surgery is to obtain tissue either through an excisional or incisional biopsy (Fig. 1) as described above, to provide pathological confirmation of the diagnosis and histopathologic typing. Frozen sections intraoperatively are difficult to differentiate rhabdomyosarcoma from several other neoplasms and inflammatory processes. If the diagnosis is confirmed, the child should be referred to pediatric oncologists for appropriate management with chemotherapy and possible radiation.

In addition, the patient should be worked up for metastases with chest X-ray, full blood count, renal and liver function test, bone marrow aspiration for cytology, and bone scan. The cerebral spinal fluid should be cytologically examined if there is any suggestion of meningeal spread. Metastases from orbital sites are to lung and bone with very rare lymphatic extension.

The poor prognosis for patients with orbital rhabdomyosarcoma following orbital exenteration (reported to be 70% mortality) prompted the use of orbital irradiation, later combined with chemotherapy for selected patients. Patients in Groups II, III, and IV usually receive radiation, generally in the range of 4000 to 5000 cGy over 4 to 5 weeks. When there is evidence of intracranial spread, whole cranial irradiation and intrathecal chemotherapy may be indicated.

Patients in whom a localized tumor has been completely resected (group I) are usually treated with chemotherapy alone. Groups II, III and IV receive combination chemotherapy and radiation therapy. The staging determines the length and number of chemotherapeutic agents used for treatment. Vincristine and actinomycin are the traditional agents that have shown to have very favorable outcomes, however newer agents, such as ifosfamide and etoposide are beneficial as well. Encouraged by results with newer methods of chemotherapy, some investigators have suggested that radiation be reserved for patients who do not achieve a complete response to chemotherapy, given the adverse side effects of radiation. It is important that the patient’s treatment regimen is managed by an experienced oncologist.

In addition to close follow-up by the pediatric oncologist, the child should have a comprehensive ocular examination after completion of treatment every 3–4 months initially. Assessment should include:

After the first year the child should be examined every 4–6 months for several years and then yearly with periodic orbital CT or MRI, depending on the clinical findings.
Shields states that that radiologists and pediatric oncologists often express concern about residual tumor and they recommend an additional orbital biopsy. They believe a biopsy should be withheld until there is evidence of tumor regrowth as determined by clinical findings and serial CT or MRI. Additional management should consider that the biopsy of a small, residual orbital tumor in a child is often surgically difficult with a higher complication risk, and that the viability of residual tumor can be difficult to interpret by a pathologist.

Radiation employed for orbital rhabdomyosarcoma (4,000 to 5,000 cGy) can be associated with ocular complications. Most notable are radiation cataract (55%), dry eye (36%), orbital hypoplasia (24%), blepharoptosis (9%), and radiation retinopathy (90%). There is a case report of an orbital malignant melanoma, observed 45 years after irradiation for orbital rhabdomyosarcoma. Long-term visual outcome in the Shields study, was 20/20 to 20/40 (39%), 20/50-20/100 (18%), and 20/200 to no light perception in (43%). Other secondary malignancies resulting from chemotherapy are rare, but include lymphoblastic leukemia and osteogenic sarcoma.

The introduction of the combination of surgery, adjuvant chemotherapy, and radiotherapy in the late 1960s improved the overall prognosis from survival of roughly 30% to over 90%. Factors that determine prognosis include: anatomic location, stage of the disease at diagnosis, tumor morphology, and patient age. Tumors in the orbit produce early ocular signs and symptoms compared to tumors in more occult locations, permitting an earlier diagnosis. Additionally, there are fewer lymphatics in the orbital area, therefore disease is usually discovered before distant metastasis. Tumor morphology is an important prognostic indicator. Patients with alveolar cell type show a 74% 5-year survival rate, whereas those with the more common embryonal cell type (80%) demonstrate a 94% 5-year survival rate. Even though age at diagnosis has not proven to be a predictor of tumor-related death, infants under 1 year of age with orbital rhabdomyosarcoma tend to have a worse prognosis with death in 46% of patients.