Radiation retinopathy is a predictable and often radiation dose-dependent complication following exposure to any type of radiation. The diagnosis is made when there is a history of radiation exposure and a physical exam revealing the characteristic funduscopic features. The diagnosis can be further supported with fluorescien angiography or optical coherence tomography. Treatment options are limited but the mainstays include laser treatment (panretinal photocoaguation and/or focal macular laser) and injections of anti-VEGF medications or triamcinolone.

Radiation retinopathy is a predictable complication following exposure to any source of radiation. It was first described in 1933 by Stallard and appears clinically as microaneurysms, telangiectases, neovascularization, vitreous hemorrhage, hard exudates, cotton wool spots and macular edema.

Radiation retinopathy is caused by exposure to any radiation source including external beam and plaque brachytherapy.

Specifically, external beam radiation as treatment for nasopharyngeal, paranasal sinus or orbital tumors, where there is limited protection for the eye, often can lead to clinically significant radiation retinopathy.[1] Plaque brachytherapy in the treatment of intraocular tumors can also cause severe damage to the immediate retina and choroid.

With plaque brachytherapy, the risk of radiation retinopathy is related to total radiation dose. In the treatment of uveal melanoma, therapeutic apical doses range from 80 to100 Gy. Factors that affect total radiation dose such as tumor height and location also increase the risk of retinopathy. Tumor thickness greater than 4 mm has been associated with a greater risk for radiation maculopathy.[4] A decreased distance to the fovea has also been associated with decreased time to maculopathy.[5]

Comorbidities such as diabetes, hypertension, simultaneous chemotherapy and pregnancy are associated with an increased risk of radiation retinopathy.[6]  Risk factors for developing proliferative radiation retinopathy include younger age, pre-existing diabetes mellitus and shorter tumor distance to the optic disc.[7]

Exposure of radiation is thought to cause preferential loss of vascular endothelial cells with relative sparing of the pericytes.[8] It is hypothesized that differential sensitivity between endothelial cells and pericytes is the result of direct exposure of the endothelial cells to high ambient oxygen and iron found in the blood which generates free radicals and leads to cell membrane damage.[9] This damage leads to occlusion of capillary beds and microaneurysm formation. The retinal ischemia from areas of retinal non-perfusion ultimately leads to macular edema, neovascularization, vitreous hemorrhage, and tractional retinal detachment. In one report, the mean time to development of proliferative radiation retinopathy following plaque brachytherapy was 32 months and using Kaplan-Meier analysis, was found to develop in 7% of patients at 10 and 15 years post-plaque.[7]

With respect to plaque brachytherapy, various strategies to decrease the radiation dose to the macula have been attempted. These include the use of collimating plaques as well as eccentric positioning of the plaques.[10],[11]  A study with vitreous substitutes including silicone oil, heavy oil and perfluorocarbon demonstrated attenuation of the radiation dose from iodine-125 plaque radiation in cadaveric eyes.[12] It remains to be seen if any of these strategies ultimately reduce the incidence of retinopathy.

A randomized controlled trial assessed the efficacy of periocular triamcinolone (40 mg) given at the time of plaque application in preventing radiation maculopathy.[13] At 18-month follow-up, eyes treated with periocular triamcinolone demonstrated less macular edema on optical coherence tomography and had less moderate and severe vision loss compared to the control group. The study reported similar rates of elevated intraocular pressure and cataract progression between the two groups.

Patients will have a history of radiation exposure. Radiation retinopathy has been reported to develop any where from 1 month[15] to 15 years[16] but most commonly occurs between 6 months and 3 years.[6]

Evaluation for radiation retinopathy includes a complete ophthalmologic exam, including a dilated funduscopic exam to look for pathologic features described below.
[The figure demonstrates macular edema, exudates, microaneurysms, and vessel telangiectasias (figure a) and cystoid macular edema on fluorescein angiography (figure b).[17]] 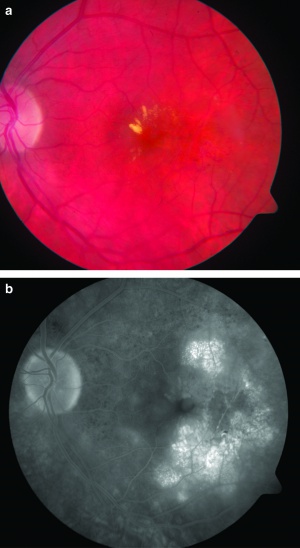 Other associated features may include:

Patients with early or mild retinopathy may be asymptomatic. Other patients with more advanced disease can present with decreased vision or floaters.

Clinical diagnosis is based on the history and physical examination.

A fluorescein angiogram can be helpful in highlighting the microvascular features of radiation retinopathy. Indocyanine green angiography can reveal precapillary arteriolar occlusion and areas of choroidal hypoperfusion.[1]  Optical coherence tomography (OCT) can be helpful in evaluating macular edema. A study by Horgan et al. found that OCT was able to detect evidence of macular edema approximately 5 months earlier than clinically detectable radiation maculopathy.[18]

Vascular endothelial growth factor (VEGF) is a secreted protein that promotes vascular leakage and angiogenesis.[19] Intravitreal anti-VEGF drugs are currently used to treat numerous ophthalmologic disorders including diabetic retinopathy, retinal vein occlusion and age-related macular degeneration. Several studies have examined the use of intravitreal bevacizumab, Ranimizumab and aflibercept in the treatment of radiation retinopathy and maculopathy.[20][21][22][23] Many of the studies demonstrated an improvement in macular edema following intravitreal anti-VEGF injections though a sustained decrease often required multiple injections. However, visual acuity was not found to improve significantly in most of the studies.

Triamcinolone acetonide is thought to downregulate various cytokines and regulate capillary permeability. It is used to treat macular edema secondary to various retinal pathologies and has similarly been used to treat radiation maculopathy. While the data is limited, some studies suggest that intravitreal triamcinolone acetonide (4 mg/0.1 ml) does transiently reduce macular edema and improve visual acuity.[24][25]  Further studies are needed to determine whether these results are sustainable and whether the benefit of frequent injections outweigh the known risks of glaucoma, cataract, and endophthalmitis.

Grid macular laser photocoagulation has been used to treat radiation maculopathy with variable success. Studies by Kinyoun et al. and Hykin et al. demonstrated a benefit in visual acuity following treatment. [26][27] However, the effect was not sustained with longer follow-up in the study by Hykin et al.

As previously mentioned, advanced radiation retinopathy can be complicated by neovascularization, vitreous hemorrhage and/or tractional retinal detachment. Proliferative radiation retinopathy has been reported to develop in 3 to 25% of eyes treated with plaque brachytherapy.[7],[31] Neovascular glaucoma can also develop and remains a difficult and devastating complication that can lead to enucleation. In patients who received I-125 plaque brachytherapy, enucleation secondary to neovascular glaucoma are reported to occur in 1-12% of treated eyes.[32]

Mild non-proliferative radiation retinopathy, characterized by subtle capillary dropout and occasional microaneurysms may not significantly affect vision and may be stable for years. However, many studies report a significant decline in visual function following plaque brachytherapy. In the Collaborative Ocular Melanoma Study (COMS), patients were followed for 3 years after receiving plaque brachytherapy and life table estimates predicted that 43% of patients would have a visual acuity of 20/200 or less.[33] In patients with large tumors (defined as tumor height >7.5 mm), the percentage of patients retaining a visual acuity of 20/200 or better has been reported to be as low as 5.5%.[34]