Silent sinus syndrome is a disease characterized by enophthalmos and/or hypoglobus secondary to the collapse of the orbital floor in the presence of asymptomatic chronic maxillary sinusitis.[1]

Soparker et al. first applied the term “silent sinus syndrome” (SSS) in 1994.[1]The authors described a series of 14 patients with spontaneous, unilateral enophthalmos or hypoglobus due to collapse of orbital floor and opacification of the maxillary sinus.[1]This disease process, however, had been previously reported. The first publication of these findings was by Montgomery in 1964, where he offered two cases of diplopia and enophthalmos associated with ipsilateral maxillary sinus opacification and collapse.[4] Wilkins and Kulwin followed with the report of two cases of spontaneous enophthalmos associated with chronic maxillary sinusitis in 1981.[5] Since these first descriptions, there have been over 100 cases published in the literature.[6] 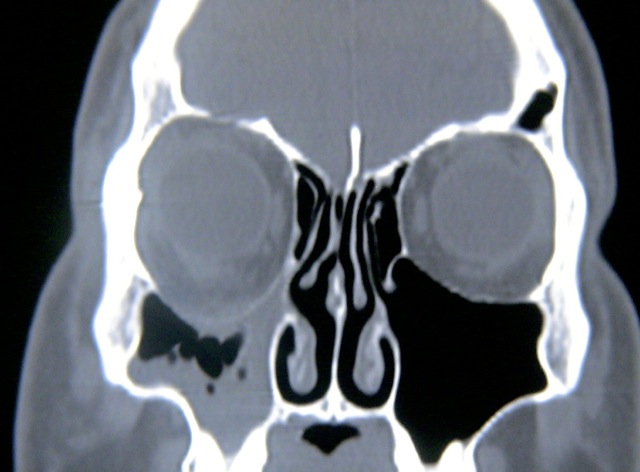 In 1997 Kass et al. suggested the name “chronic maxillary atelectasis” (CMA), as a term describing 22 patients with similar findings. CMA, however, may be diagnosed in patients with chronic rhinosinusitis symptoms while the criteria of SSS stipulate that affected patients must have the absence of these symptoms for diagnosis.[1][2] Additionally, CMA is divided into three stages, with stage I and II describing maxillary deformity in the absence of hypoglobus or enophthalmos.[2]

While some strictly distinguish CMA and SSS as separate clinical entities by presence or absence of chronic sinusitis symptoms, others suggest that SSS is actually part of the spectrum of CMA.[6] The tertiary stage of CMA, manifests with enophthalmos and/or hypoglobus and closely overlays the definition of SSS.[2]

Most report an equal prevalence of SSS in men and women,[7] although one large study of 84 patients suggests there may be a slightly higher rate in men.[8] There is an equal reported incidence of right and left-sided disease.[6][7]

These anatomical variations are hypothesized to predispose to a “flap-valve” occlusion of the natural maxillary sinus ostium, wherein the sinus becomes completely occluded allowing gas resorption and development of negative pressure in the sinus antrum.[11]

In their early reports, Montgomery named a mucocele as the cause of enophthalmos, while Wilkins and Kulwin noted a strong association with ipsilateral chronic maxillary sinus disease.[4][5] When silent sinus syndrome was described in 1994 by Soparkeret al., the disease process was initially thought to be related to pre-existing sinus hypoplasia.[1] This association, however, was disproven after a 1999 case report by Davidsonet al. documented pre-disease imaging demonstrating normal maxillary sinus anatomy several years prior to the onset of symptoms and manifestations of SSS.[12] This report thus strongly suggested that SSS occurs in patients with normal sinus size prior to disease development.

Silent sinus syndrome occurs due to hypoventilation of the maxillary sinus after osteomeatal complex obstruction.[1][11][13] Obstruction of the natural sinus os may be secondary to multiple mechanisms including lateralized infundibular wall,[2]lateralized middle turbinate,[9][11] mucocele or polyp occluding the ostium,[1] inflamed nasal mucosa, or presence of infraorbital ethmoid air cells that narrow maxillary ostium.[14]

Occlusion and hypoventilation of the sinus leads to negative pressure development. This phenomenon was first demonstrated experimentally in rabbits in whom experimental occlusion of maxillary ostium resulted in measured subatmospheric pressure in the sinus.[15] Kass et al. then investigated intra-sinus pressure measurements in 5 patients with diagnosed maxillary atelectasis and compared them to pressures of 5 healthy control patients.[11] The study utilized an 18-gauge needle placed into the sinus and attached to a pressure transducer. Results revealed subatmospheric intra-sinus pressures ranging from -13 to -6 cm H2O with a mean of −8.4 ± 2.6 cm H2O.[11] Another case report employing the same measurement procedure documented negative pressure in the maxillary sinus of -23 mmHg (31.3 cm H2O).[12] This process of ostium occlusion followed by negative pressure development may be analogous to what occurs in the middle ear in patients with Eustachian tube obstruction.[11] 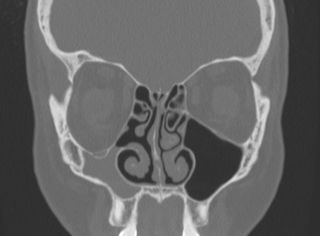 Once the sinus becomes occluded and negative pressure develops, the sinus cavity is filled with a combination of mucus and acellular transudate[11] due to reabsorption of the aqueous component of the natural sinus mucosal secretions.[7]

This process of aeration loss is hypothesized to create chronic, low-grade mucosal inflammation. Over time, secondary demineralization of the bony orbital floor results, thus allowing the negative pressure of the sinus to implode these weakened areas.[10]

There has been a reported negative association between cigarette smoking and incidence of SSS. Observers of this phenomenon have hypothesized that chronic inflammation and sinonasal disease caused by smoking may lead smokers to present with symptoms much earlier and therefore have treatment before development of the syndrome.[3][7]

There has been an observed association of the late development of iatrogenic SSS after some bone-removing orbital decompressions for thyroid eye disease. One series reported 6 patients developing enophthalmos and hypoglobus months to years after ipsilateral orbital decompression for thyroid eye disease.[16] Secondarily prolapsed fat into the ethmoidal infundibulum during the surgery occludes the maxillary sinus ostium. Development of SSS after orbital decompression may also be related to the removal of inferomedial bone strut important to maintaining the normal maxilla-ethmoidal interface and sinus aeration.[7][16] With this consideration, it is recommend a concurrent prophylactic middle meatal antrostomy be performed with surgery for orbital decompression if the bone strut is to be removed to prevent future obstruction and imploding antrum.[10]

Silent sinus syndrome is most commonly a gradual and progressive disorder with a time course of weeks to months for sign and symptom development. Some reports, however, have documented rapid presentation overnight or over the course of a few days.[7] The longest reported progression was observed over 2.5 years.[7] The average duration of symptoms before presentation range from 4 to 8 months.[3][7][8]

Rose et al. depict a more acute underlying process whereby the chronic asymptomatic sinus disease precipitates an acute collapse of the bony orbital floor and sinus walls.[3] In this manuscript, they describe the disease as non-progressive but later clarify that there is observed stability of the orbital signs of enophthalmos and hypoglobus only after re-establishment of free drainage from the maxillary sinus with endonasal sinus intervention.[10]

Those diagnosed with silent sinus syndrome most commonly present complaining of changes in their facial appearance with enophthalmos and hypoglobus as the most common manifestations.[6] Enophthalmos is present in 98% to 100% present of cases with the measurement of enophthalmos ranging from 2 mm to 6 mm [3][6][7][8] with a mean of 3.4 mm.[7] Hypoglobus may be slightly less common than enophthalmos, documented in only 53% of patients in a review of 55 cases.[6]The degree of hypoglobus ranges from 1-6mm with a mean of 3.2 mm.[3][7]

SSS is almost exclusively a unilateral condition, although there are two case reports in the literature of bilateral disease.[17] [18]

The incidence of upper eyelid position change is high, reported in up to 88% of patients in one large case series.[7] Pseudoretraction was seen in the large majority of these patients (90%) due to descent of the globe. However the eyelid can also less commonly present with pseudoptotis due to deepening of superior sulcus and lower relative position of the upper eyelid.[7][10] Narrowing of the vertical palpebral aperture has also been noted.[3]

Pseudoretraction of right upper eyelid due to silent sinus syndrome.

Diplopia is the most commonly occurring visual symptom, noted in 28% to 65% of cases in two large case series.[6][8] In a series of 67 patients, however, ocular motility limitation was only noted in only 4 cases, each with significant hypoglobus.[7] The proposed mechanism of diplopia is secondary to limitation of the superior and inferior oblique muscles, as their attachments to the bony orbit make them vulnerable to dysfunction when the globe becomes displaced in relationship to bony orbit.[7][8] It has also been suggested that the inferior rectus muscle may develop fibrosis.[19]

By strict criteria, silent sinus syndrome is not associated with exhibited sinus symptoms.[1][8]

Radiographic findings are pathognomonic and required to make the diagnosis of silent sinus syndrome.[1][3][12] CT imaging characteristically shows ipsilateral maxillary sinus shrinkage with areas of focal bone loss and increased radiolucency due to enlarged fat density in the pterygomaxillary fossa.[1][3][6] 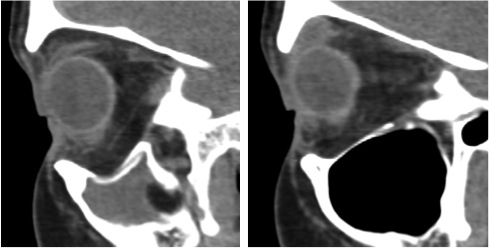 The orbital floor is typically inferiorly displaced and may be associated with concavity of the medial and posterolateral walls of the maxilla as well.[3][6] The radiographic appearance of the orbital floor is the point of some debate. Most authors exclusively describe patchy demineralization[3] and decreased bone density[6] or dramatic thinning[1] of the bony orbital floor. In the Rose et al. 2003 series, however, 3 of 12 patients instead were noted to have thickened bone of the orbital floor.[3] Dr. Rose later clarified this observation, explaining that one would expect hyperostosis and orbital floor thickening only in cases where mucosal inflammation had been very longstanding.[10]

Other radiographic findings include nasal septum deviation to the affected side, noted in 32% to 83% of cases,[3][7][9] and anomalous direction of middle turbinate.[3] Rarely, concurrent collapse of a neighboring, ipsilateral ethmoid sinus has been documented.[3][13][21] 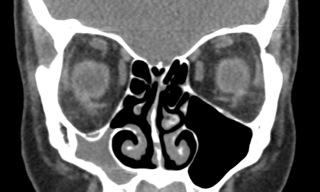 Burroughs et al. published a series of 19 cases referred with the incorrect diagnosis of SSS.[20] The most frequent true underlying etiologies in order of prevalence were unrecognized orbital fractures, congenital facial asymmetry, contralateral exophthalmos from thyroid eye disease, and Parry-Romberg syndrome. They noted that those presenting with misdiagnosis often complained of facial pain and mucoprurulent discharge that predated their orbital manifestations. The criteria of SSS diagnosis mandate that patients must present with spontaneous enophthalmos or hypoglobus in the absence of these sinonasal symptoms.[1] Additionally, other disease processes causing spontaneous enophthalmos such as Parry-Romberg syndrome are noted to have less hypoglobus and pseudoretraction of the upper lid than SSS.[7][20]

Historically, creation of a large naso-antral window via the Caldwell-Luc procedure was utilized to treat SSS.[16] Blackwell et al. in 1993 described an endoscopic approach to enlargement of the maxillary ostium in order to relieve the obstruction of the osteomeatal complex.[22] This endoscopic antrostomy with or without uncinectomy is now the gold standard to re-establish normal sinus aeration.[9][13] Great care must be taken during endoscopic approach near the lateral nasal wall in setting of altered uncinate process anatomy as penetration of lamina papyracea can occur.[2][13]

A case series of 16 patients by Babar-Craig et al. who underwent middle meatal antrostomy reported only small minority (2/16) needing a second stage floor repair.[9]The authors advise waiting up to 6 months after aeration to observe for resolution of orbital signs prior to evaluating for the need of an orbital implant. Of 47 reported cases by Brandt et al. 34% did not reconstruct orbital floor.[6] Thomas et al. reported enophthalmos reduction of 1-2 mm after endoscopic maxillary antrostomy alone without further repair of the floor in a series of 4 patients.[23]

A single-stage procedure in which endoscopic antrostomy is combined with orbital floor repair is preferable when severe enophthalmos is present.[24] [25] [26]Advantages to a single-stage procedure include reduced morbidity, reduced patient discomfort, and less time of hospitalization.[24] Risk of complications such as implant infection, post-operative diplopia, vision loss, or hematoma with a single stage procedure is low.[24][25]

The most common materials of choice for SSS floor reconstruction include Medpore implants, silicone blocks, and Teflon sheets.[8] Three patients repaired with silicone blocks in a case series of 67 developed further enophthalmos years later when the implant descended.[7] Careful placement must be employed when using a silicone block, shaping the silicone to evenly distribute pressure onto neighboring healthy bone.[10]

In 2011, a case report of successful nonsurgical management using hyaluronic acid gel to reduce enophthalmos after middle-meatal antrostomy has been published.[27] The gel was placed as a single bolus in the intra- and extraconal posterior orbit with a 21-gauge needle. Immediate improvement of the patient’s unresolved enophthalmos and superior sulcus deformity was described.