Thyroid eye disease (TED) is an autoimmune disease caused by the activation of orbital fibroblasts by autoantibodies directed against thyroid receptors. TED is a rare disease, which had an incidence rate of approximately 19 in 100,000 people per year in one study.[1] The disorder characterized by enlargement of the extraocular muscles, fatty and connective tissue volume. Graves' disease (GD) is an autoimmune disorder involving the thyroid gland, typically characterized by the presence of circulating autoantibodies that bind to and stimulate the thyroid hormone receptor (TSHR), resulting in hyperthyroidism and goiter. Organs other than the thyroid can also be affected, leading to the extrathyroidal (outside the thyroid gland itself) manifestations of GD. TED is observed in ~ 50% of patients while Graves' dermopathy and acropachy are quite rare.[2] TED was previously known as thyroid-associated ophthalmopathy (TAO), Graves orbitopathy (GO) and other variations.

TED is most frequently associated with Hyperthyroidism, consisting of approximately 90% of the cases. However about 10% of patients with TED have either a normal-functioning (Euthyroid) or under-functioning thyroid (Hypothyroidism e.g. Hashimoto's thyroiditis) . While strict control of thyroid function is crucial in patients with TED, the course and severity of ocular manifestation does not always correlate with thyroid hormone levels. Thus, treatment of thyroid dysfunction does not necessarily affect course of Grave’s ophthalmopathy.

TED has a higher prevalence in women than men. Both men and women demonstrate a bimodal pattern of the age of diagnosis. The median age is 43 years for all patients, with a range from 8 to 88 years old. Women are affected five times more than men and this has been linked to a higher incidence of Grave's disease in women. Patients diagnosed over 50 -year have worse prognosis overall.[1]

Although the underlying mechanisms of action of these processes are not completely understood, the presumed mechanism is activation of orbital fibroblasts by Graves' disease-related autoantibodies, which lead to the release of T cell chemoattractants, initiating an interaction which ultimately results in fibroblasts expressing extracellular matrix molecules, biologic materials proliferating and differentiating into myofibroblasts or lipofibroblasts and deposition of glycosaminoglycans which bind water that lead to swelling, congestion in addition to connective tissue remodeling. This results in extraocular muscle enlargement and orbital fat expansion. 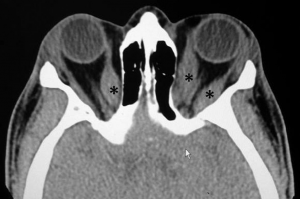 9. The upper lid signs in TED include-

10. The lower lid signs in TED include-

11. The conjunctival signs include-

12. The extraocular movements signs include-

The diagnosis can be done clinically with the characteristic clinical picture, restrictive nature of the disease and associated systemic thyroid disease. Though not diagnostic, thyroid hormone levels, thyroid-stimulating immunoglobulins (TSI), anti thyroid antibodies can be suggestive of diagnosis.

Ultrasonography: Both A-scan and B-scan transocular echograms can be used to visualize the orbital structures and determining recti muscle enlargement. Advantage is its low cost, lack of ionizing radiation and relatively short examination time

Computed tomography (CT) scan: This type of imaging without contrast may distinguish normal structures from abnormal structures of different tissue density. It demonstrates enlargement of the bellies and sparing of the tendons. It helps in assessing the relationship between the optic nerve and muscles at the apex, which helps in planning for the surgical intervention if needed.

Magnetic resonance imaging (MRI): Fusiform rectus enlargement and orbital fat expansion may be identified. MRI may also aide in assessing water content in the muscles and other soft tissues. This may correlate with active inflammation.

Werner reported the NO SPECS (Nophysical signs or symptoms, Only signs, Soft tissue involvement, Proptosis, Extraocular muscle signs, Corneal involvement, and Sight loss) Classification system in 1969 and a modified version was published in 1977. What’s worth noting is that this system grades on disease severity and not the activity of the disease. 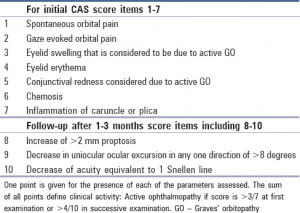 A shift in treatment began in 1989 when the Clinical Activity Score (CAS) was created to help distinguish the active and stable phases of the disease- its distinguishing feature is grading classic signs of acute inflammation. A CAS ≥3/7 is indicative of active disease.

In the VISA classification, the 4 severity parameters can be found in the name, and a maximum score of 20 is used to grade the severity of disease. Each of the four parameters has further divisions in order to better asses the activity of the disease; the form can be found at (http://www.thyroideyedisease.org).

EUGOGO classification attempts to assess both disease activity and disease severity. Activity is based on four measures of inflammation, pain, redness, swelling, and impaired function, and function is graded with decreasing monocular motion and diminishing visual acuity. The classification system also has developed an image atlas which can be used to accurately grade the patient in front of you. Additionally, the EUGOGO grading system does well in differentiating management categories[8].

Conservative: Both smoking cessation and euthyroid status help preventing further exacerbation and decrease the duration of active disease.[9] For corneal exposure, lubricants, taping and protective shields can be tried and if necessary tarsorrhapphy can be done. For diplopia, Fresnel prisms or occlusion therapy may be considered. Others are lifestyle modifications e.g. sodium restriction to reduce water retention and tissue edema. Sleeping with the head of the bed elevated to decrease orbital edema. Oral NSAIDs may be used for periocular pain. Selenium has shown significant benefit in patients with mild, non‐inflammatory orbitopathy.[10]

Teprotumumab: This biologic infusion therapy has been shown in clinical studies to reduce signs and symptoms of TED.[11][12] Teprotumumab binds to IGF-1R and blocks its activation and signaling. Tepezza (Teprotumumab-trbw) is the first and only FDA-approved prescription treatment for TED.

Systemic steroids: To decrease orbital inflammation oral prednisone in a dose of 1- 1.5-mg/ kg can be given for a suggested maximum period of 2 months. Intravenous (IV) corticosteroids pulse methyl prednisolone can be considered as an alternative.

Orbital Radiation: Can be used alone or in conjunction with corticosteroids The radiation therapy works on the similar mechanism of decreasing inflammation. Typical dose of 2000 cGy for each orbit 200 cGy / day given over a period 10 days. It generally improves vertical motility. Radiation retinopathy may occur as a side effect.

Orbital Decompression: This surgical procedure enlarges the existing space of the orbit by partial removal of bony walls. Orbital decompression commonly involves the orbital floor, medial wall, and lateral wall. In rare cases the roof of the orbit may also be decompressed surgically.

Eyelid Retraction Repair and Tarsorrhaphy : These reconstructive surgical procedures may be preformed to address eyelid retraction or exposure keratitis.

Alternative Treatments: Rituximab is a monoclonal antibody that targets CD‐20 on B‐cells[13][14]