Types 1-4 Stickler syndrome are classically inherited in an autosomal dominant fashion[3], though a significant number of cases may be sporadic.[2]. Type 5 has only ocular involvement (COL2A1). The majority of cases that present to an ophthalmology outpatient department will be either Type 1 or Type 2 Stickler syndrome.[4]

Stickler syndrome is believed to be a direct result of abnormalities in the production of collagen types II, IX and XI, all of which are recognized as components of the human vitreous.[2] Normal collagen fibrils are composed of three identical (homotrimer) or differing (heterotrimer) polypeptide chains; genetic mutations affecting the ability of consitiuent polypeptide chains to successfully form stable trimers therefore prevent the production of mature collagen and subsequently produce the clinical manifestations of Stickler syndrome. The condition has been divided into subgroups based on ocular and systemic clinical findings, with each subgroup also corresponding to a specific genetic defect.[2]

Stickler syndrome classically presents in the pediatric population due to the characteristic facies associated with Pierre-Robin sequence.  Ophthalmic manifestations, if not detected early, may not present until a retinal detachment develops; classically, this occurs in young adulthood, but may occur at any age.  Pertinent history may be elicited by inquiring specifically about associated symptoms of hearing loss and joint pain. 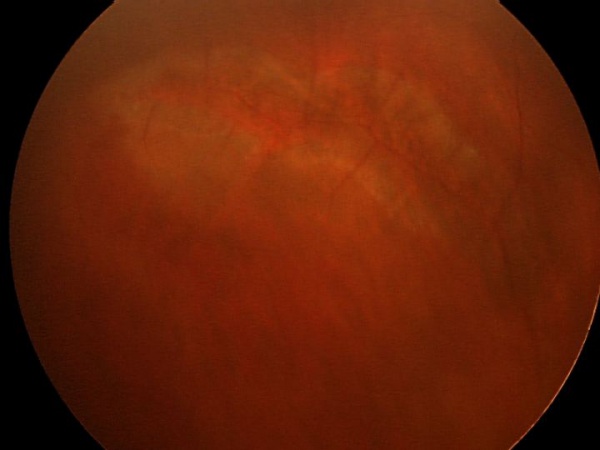 The most common ocular findings in Stickler syndrome are vitreous syneresis in a membranous or beaded configuration and radial perivascular retinal Lattice degeneration, both of which are present in up to 100% of affected patients[5]. These vitreoretinal abnormalities may lead to a giant retinal tear and rhegmatogenous retinal detachment in up to 50% of patients. Less common findings include axial myopia (present in 80%) resulting from megalophthalmos, open-angle glaucoma resulting from anterior segment dysgenesis, and cataract. The cataract is typically a congenital quadrantic lamellar opacity which may not involve the visual axis. 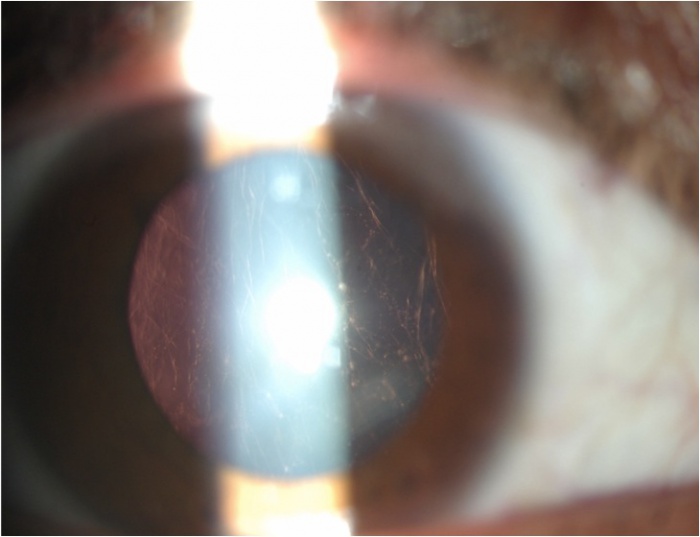 The diagnosis of Stickler syndrome has historically been based on the presence of characteristic clinical features; in Types 1-3, the systemic findings may prompt ophthalmic referral prior to development of any visual complaints. Type 4, the ocular-only variant, may remain asymptomatic prior to routine eye examination or development of retinal detachment; the ophthalmologist therefore plays a key diagnostic role in these cases[2]. Reflecting its large collagen content, the vitreous is the primary ocular site affected in Stickler syndrome. Classically, the Stickler vitreous is described as “optically empty”[3], though differing phenotypes have been described based on slit lamp findings: The so-called membranous vitreous appears as a collection of gel in the immediate retrolental space, posteriorly bounded by a membranous condensation. The beaded vitreous contains diffuse, sparse lamellae with a beaded appearance. A third variant has been described as a generally hypoplastic vitreous with the “optically empty” appearance but lacking the membranous or beaded features. As noted above, the membranous and beaded phenotypes are associated with the COL2A1 and COL11A1 genes, respectively; this relationship has proven useful in performing targeted molecular genetic analysis.

Due to the difficulty in slit-lamp examination of infants and young children, the earliest ophthalmic findings noted may be the characteristic radial perivascular retinal degeneration visible on indirect ophthalmoscopy. This finding is not present at birth, but may be seen within the first 4 years of life, and typically manifests as patches of retinal pigment epithelium atrophy around the major vessels which subsequently become darkly hyperpigmented. In ocular-only variants, this may be the only obvious clue to early pediatric diagnosis.[5] Retinal tears, when present, typically occur at the edge of an atrophied area.

Treatment of Stickler syndrome is primarily supportive, although there may be a role for prophylactic treatment (retinal laser or cryo) to prevent complicated retinal detachment.

Retinal detachment is a common cause of visual loss in patients with Stickler syndrome; it is estimated to occur in up to 65% of affected patients, and indeed, Stickler syndrome is the most common inherited cause of rhegmatogenous retinal detachment.[6] Detachment causing visual loss most typically occurs in young adulthood, but may occur within the first five years of life. Patients are particularly at risk of developing a Giant retinal tear (GRT), which typically occurs during Posterior vitreous detachment. Associated retinal detachments are notoriously difficult to manage and patients are prone to development of Proliferative vitreoretinopathy (PVR).[7] Treatment with primary vitrectomy is generally more successful than scleral buckling procedures and has been suggested to the procedure of choice in Stickler syndrome-related retinal detachment.

Prophylactic treatment of peripheral retina using 360-degree cryotherapy or circumferential laser appears may be effective in reducing rates of retinal detachment. Both treatment modalities have been retrospectively compared to observation and both are apparently effective in significantly decreasing risk of retinal detachment; however, neither modality has been shown to be superior to the other.[8] It has been recommended that the option for prophylactic treatment be discussed with patients in early life.[7]

As noted above, the typical cataract found in Stickler syndrome is of a congenital quadratic lamellar type.[2] Such cataracts may or may not negatively impact vision; if decreased vision is present, removal may be performed with standard lensectomy or phacoemulsification. Patients are at an increased risk of both vitreous loss and post-operative retinal detachment; retinal breaks should be addressed prior to cataract surgery.[3]