Waldenstrom macroglobulinemia (WM) is a malignant lymphoplasmo-proliferative disorder which overproduces IgM, a monoclonal pentameric immunoglobulin. In patients with WM, the bone marrow or the lymph nodes are occupied by pleomorphic B lymphocytes in various maturation stages ranging from small lymphocytes, lymphoplasmacytoid cells with basophilic cytoplasm to plasma cells. Mast cells also increase significantly in the bone marrow of these patients while overexpressing CD40 Ligand, an inducer of B-cell proliferation. Patients present with cytopenias due to bone marrow infiltration, lytic bone disease, hepatomegaly, splenomegaly, lymphoplasmacytic infiltration of the pulmonary parenchyma, or Bing-Neel syndrome.

Bing-Neel syndrome is a rare complication due to lymphoplasmacytoid infiltration and IgM deposits in the CNS. Perivascular malignant infiltration occurs as a result of long-standing hyperviscosity and secondary CNS vascular hyperpermeability. Symptoms include vertigo, headache, ataxia, diplopia, nystagmus, and coma. Ocular manifestations of the disease include infiltration of the conjunctivae, malignant vitritis, and hyperviscosity-related retinopathy (Figure 1). [1] 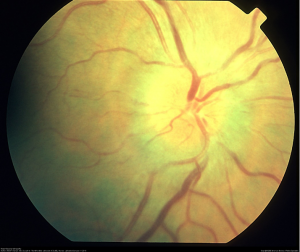 Figure 1: Hyperviscosity-related retinopathy due to Waldenstrom macroglobulinaemia in the right eye. Marked venous engorgement (sausaging) is seen along with optic nerve edema. [[2]

WM is primarily considered a sporadic disease, but some studies have suggested a possibility of a single genetic defect. Deletions in 6q21-22.1 were found in majority of patients with WM, and B-cell disorders were also found in first degree relatives of these patients. Serum hyperviscosity leading to vascular disturbances plays a major role in the microvascular changes of the retina causing vascular dilation. [3]

Waldenstrom macroglobulinemia has an incidence of 3 per million people per year. This accounts for 1-2% of hematological cancers. WM is found to be more prevalent amongst Caucasians and males. About 5% of the patients are Black and 55% to 70% are men. WM is rare in patients younger than 50 years old. [1][4] About 40% of patients with WM will have retinal issues due to serum hyperviscosity. Additionally, having a pre-existing IgM–Monoclonal Gammopathy of Undetermined Significance (MGUS) significantly increases the risk of developing WM later in life. There are some studies showing an association between Hepatitis C and WM. Heredity (certain mutated genes) and certain autoimmune diseases like Sjogren syndrome also increase the risk of developing WM.

Waldenstrom macroglobulinemia is characterized by cytopenia due to bone marrow infiltration, anemia, lytic bone disease, organomegalies, diffuse pulmonary infiltrates or pleural effusion due to lymphoplasmacytic infiltration of the parenchyma, and malignant infiltration of the bowel, stomach, skull base, orbit, and CNS.

WM is a lymphoproliferative B-cell disorder that is an indolent form of B-cell non-Hodgkin’s lymphoma, also known as lymphoplasmacytic lymphoma. The two main landmarks of this disease are bone marrow infiltration with clonal lymphoplasmacytic cells and IgM proliferation. In the majority of patients, WM follows Monoclonal Gammopathy of Undetermined Significance (MGUS). Pleomorphic lymphoid cells and Dutcher bodies (cytoplasmic inclusion bodies which stain positive for periodic acid Schiff) may be seen in a bone marrow biopsy. Mast cell overgrowth is also common and plays a role in stimulating bone marrow and IgM proliferation. WM is characterized by hyperviscosity/paraproteinemia due to overproduction and deposition of pentamer IgM. Due to the large size of IgM antibodies, the majority remain intravascular and form aggregates by binding to water. Additionally, because of their cationic nature, they attract the negatively charged red blood cells and lower their repulsive forces. All this leads to hyperviscosity syndrome and its associated symptoms as well as rouleaux formation.

Normal serum viscosity is 1.4 to 1.8 times that of water at body temperature, and multiple studies state that symptoms due to hyperviscosity are unlikely if serum viscosity is less than 4 cP (centipoise, unit of dynamic viscosity) and more likely if values are higher than 5.0 cP. [3][5] Viscosity is highest in small venules; therefore, the force exerted by viscous fluids will tear the venule wall, resulting in microvascular bleeding. [6] This is most readily observable in the retina as central retinal hemorrhages and vascular dilation, and is commonly seen in WM. According to Menke et al., both the central and peripheral retina are involved in the most severe hyperviscosity-related retinopathy. On the other hand, only peripheral hemorrhages and dilated veins were found in milder hyperviscosity-related retinopathy (intermediate serum viscosity levels). [3]

Since the major risk factors like MGUS and older age are non-modifiable, there are no existing recommendations for prevention of Waldenstrom macroglobulinemia.

To make the diagnosis of Waldenstrom macroglobulinemia, it is important to follow the diagnostic criteria strictly and rule out all other lymphoproliferative diseases. The key to diagnosis includes two main criteria (Mayo Clinic) of detecting IgM monoclonal protein (M-spike) of any size and at least 10% lymphoplasmacytic lymphoma cells in the bone marrow. [7] The lymphocytes are of B-cell profile with expression of surface IgM, CD19, CD20, CD22, and CD79a antigens. Diagnostic workup includes blood cell count with differential to look for cytopenia, immunoglobulin levels (IgM would be high and IgG is usually low), electrophoresis, viscosity measurement, and bone marrow aspiration and biopsy. Biopsy specimens undergo additional testing which includes immunohistochemistry, flow cytometry, and cytogenetics. [7] When a condition that leads to hyperviscosity syndromic state (such as any lymphoproliferative diseases) is suspected, a thorough ophthalmic examination should be performed. Characteristic findings on a dilated fundoscopic examination may prompt an initial diagnosis. [6] (See below for more details under physical examination).

In 1944, Jan Gosta Waldenström first described and identified two patients with macroglobulinemia with symptoms which he attributed to elevated serum viscosity. This included a triad of mucosal bleeding, visual alterations, and neurologic abnormalities and was consistent with reports of increased serum viscosity in multiple myeloma previously documented between 1932 and 1937. J. L. Fahey coined the term “hyperviscosity syndrome” in 1965. [6]

The physical exam is consistent with hyperviscosity syndrome, presenting with symptoms of neurologic dysfunction such as headache and fatigue, bleeding diathesis such as epistaxis, and visual abnormalities associated with retinopathy. [7] Ocular signs of hyperviscosity manifest as a hyperviscosity-related retinopathy. In the early stages of Waldenstrom macroglobulinemia, it is postulated that small retinal hemorrhages are seen in the far periphery that can be observed on indirect ophthalmoscopy with scleral depression. [3] Later, the dilated fundoscopic examination also reveals vascular tortuosity and sausage-like dilation of retinal veins, as well as more centrally located retinal hemorrhages, macular edema, and optic disc edema. [8] The hemorrhages observed are microaneurysms, dot-blot, and flame hemorrhages. It is important to note that retinal hemorrhages can occur without affecting visual acuity if the macula is spared. Optical coherence tomography (OCT) is often used to monitor for macular edema, which can progress to neurosensory serous macular detachments. Bilateral central retinal vein occlusions, as a result of hyperviscosity syndrome, have also been reported. [6] Fluorescein angiography demonstrates increased retinal circulation time, and areas of capillary non-perfusion and microaneurysms. [8] 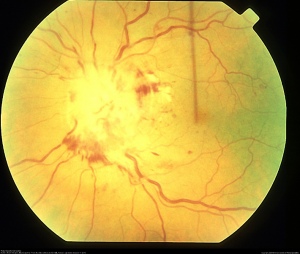 Figure 2: Hyperviscosity-related retinopathy and optic nerve edema due to Waldenstrom macroglobulinaemia in the left eye. [9]

Most patients with Waldenstrom macroglobulinemia have symptoms due to tumor infiltration and/or monoclonal immunoglobulin M leading to hyperviscosity syndrome.

Signs/Symptoms due to tumor infiltration

• Malignant infiltration of stomach and bowel

Signs/Symptoms due to Hyperviscosity

- CT scan: signs of lymphoma in the chest, abdomen, and pelvis

Initial treatment of Waldenstrom macroglobulinemia involves managing the acute symptoms due to hyperviscosity syndrome since more than 80% of IgM is intravascular. Plasmapheresis is used to decrease IgM in the vasculature and is shown to be as effective as reducing serum IgM by 35%-48%. This treatment also helps with reversing the retinal findings like vascular engorgement.

Once serum IgM levels are controlled, the next step is to prevent another spike and maintain the levels with chemotherapy. Cyclophosphamide/doxorubicin/vincristine/prednisone/rituximab (CHOP-R) is a stem cell sparing regimen, and rituximab (a recent addition to the CHOP regiment) may be added without an increase in toxicity. [1][7][10][11] Other studies favor the use of DRC (dexamethasone, rituximab, and cyclophosphamide) or BR (bendamustine and rituximab) over CHOP-R as this regimen may be more tolerable and is associated with greater periods of halting disease progression.

Red blood cell transfusions are not recommended due to the risk of increasing serum viscosity from interaction of host IgM with donor RBCs.[12]

The median survival of patients with Waldenstrom macroglobulinemia is around five years with up to 40% surviving ten years or more. In the majority of patients, the cause of death is advanced age-related comorbidities rather than WM itself. Presence of increased immunoblasts/pleomorphic cells, deletion of 6q, and absence of MYD88 L265P mutation are all associated with poor prognosis. WM can also transform to diffuse large B-cell lymphoma which has an adverse outcome.[7]