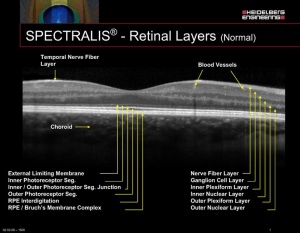 Optical Coherence Tomography (OCT) is a non-invasive diagnostic technique that renders an in vivo cross sectional view of the retina. OCT utilizes a concept known as inferometry to create a cross-sectional map of the retina that is accurate to within at least 10-15 microns. OCT was first introduced in 1991 [1]and has found many uses outside of ophthalmology, where it has been used to image certain non-transparent tissues. Due to the transparency of the eye (i.e. the retina can be viewed through the pupil), OCT has gained wide popularity as an ophthalmic diagnostic tool.

From its inception, OCT images were acquired in a time domain fashion. Time domain systems acquire approximately 400 A-scans per second using 6 radial slices oriented 30 degrees apart. Because the slices are 30 degrees apart, care must be taken to avoid missing pathology between the slices.

Spectral domain technology[2], on the other hand, scans approximately 20,000-40,000 A-scans per second. This increased scan rate and number diminishes the likelihood of motion artifact, enhances the resolution and decreases the chance of missing lesions. Spectral domain systems increase the signal-noise ratio by image averaging of multiple B-scans at the same location. Whereas most time domain OCTs are accurate to 10-15 microns, newer spectral domain machines may approach 3 micron resolution. Whereas most time domain OCTs image 6 radial slices, spectral domain systems continuously image a 6mm area. This diminishes the chance of inadvertently missing pathology. Spectral domain systems typically operate at 800-870 nm wavelengths, although longer wavelengths of 1050-1060 nm are being developed for deeper penetration in the tissue.

In the late 2000's, the advent of enhanced depth imaging (EDI)[3] allowed for better visualization of the choroid and choroidoscleral interface using the spectral domain system. EDI employed the use of image averaging and set the 0 delay line to adjacent to the choroid.

Swept source technology[4], uses a wavelength-sweeping laser and dual balanced photo detector, allowing for faster acquisition speeds of 100,000-400,000 A-scans per second. This technology uses longer wavelengths of 1050-1060 nm for deeper tissue penetration without the need for EDI. This wavelength provides an axial resolution of about 5.3 um in tissue compared to the approximately 5 um axial resolution of the standard 800 nm wavelength of commercial spectral domain devices. The enhanced axial resolution along with the faster scanning speeds, which allows for greater image averaging, improves image quality and ability to visualize deeper structures in more detail.

Most recently, both spectral domain and swept source OCT have been used to generate non-invasive non-dye based OCT angiography[1] images. In brief, OCT angiography uses motion contrast by comparing the decorrelation signal between multiple B-scans obtained at each retinal cross-section to detect blood flow, employing the principle that theoretically only circulating erythrocytes within the retinal capillaries should be moving in the retina. 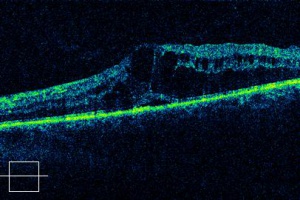 OCT is useful in the diagnosis of many retinal conditions, especially when the media is clear. In general, lesions in the macula are easier to image than lesions in the mid and far periphery. OCT can be particularly helpful in diagnosing:

In some cases, OCT alone may yield the diagnosis (e.g. macular hole). Yet, in other disorders, especially retinal vascular disorders, it may be helpful to order additional tests (e.g. fluorescein angiography or indocyanine green angiography).

Because OCT utilizes light waves (unlike ultrasound which uses sound waves) media opacities can interfere with optimal imaging. As a result, the OCT will be limited the setting of vitreous hemorrhage, dense cataract or corneal opacities.

As with most diagnostic tests, patient cooperation is a necessity. Patient movement can diminish the quality of the image. With newer machines, acquisition time is shorter which may result in fewer motion related artifacts.

The quality of the image is also dependent on the operator of the machine. Early models of OCT relied on the operator to accurately place the image over the desired pathology. When serial images were acquired over time (e.g. during treatment for AMD with anti-VEGF therapy), later images could be taken that were off axis compared to earlier images. Newer technologies, such as eye tracking equipment, limit the likelihood of acquisition error.