Inflammation may result from infections, most commonly viral, but may also be of bacterial and rarely fungal and parasitic etiology. Other causes of inflammation include autoimmune disorders such as Thyroid Eye Disease, Sjogren's syndrome, IgG4 related disease, etc. The most common infectious etiology for dacryoadenitis is viral, with Epstein-Barr virus being the most common viral cause. Less common viral causes include adenovirus, varicella zoster, herpes simplex, rhinovirus, cytomegalovirus or mumps.

Besides infection, other etiologies include inflammatory causes such as non-specific orbital inflammation (NSOI), IGG4-related disease, or sarcoidosis, or neoplastic causes such as lymphoma, adenoid cystic carcinoma, or pleomorphic adenoma.

Potential risk factors include exposure to viral or bacterial agents or the presence of autoimmune disorders including Sjögren's syndrome, sarcoidosis or IgG4-related disease.

Symptoms of dacryoadenitis include pain in the superolateral orbit, pain with eye movements, droopy upper eyelid or difficulty opening the affected eye, redness of the eye, and occasionally double vision especially in up gaze or lateral gaze. 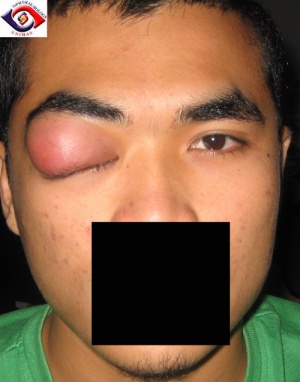 Right-sided dacryoadenitis in a young man.

Signs of dacryoadenitis include tenderness, edema, erythema or induration overlying the superolateral orbit, lid ptosis, conjunctival injection with or without chemosis, regional lymphadenopathy, proptosis, limitation of ocular motility and rarely visual loss. Fever and malaise may be present.

A contrast-enhanced computed tomography (CT) scan of the orbits will typically demonstrate enlargement of the affected lacrimal gland with enhancement. There may be associated fat stranding with contiguous involvement of the lateral rectus and /or superior rectus/levator muscle complex.

If sarcoidosis or other specific orbital inflammatory disorders are suspected, a chest radiograph is a reasonable screening tool to evaluate for lymphadenopathy or pulmonary disease.

In children and in adults with persistent/recurrent symptoms, Magnetic Resonance Imaging (MRI) of the orbits may also be considered.

Although there are no specific laboratory tests for dacryoadenitis, depending on the clinical context, it may be of use to obtain a complete blood count (CBC) with differential, erythrocyte sedimentation rate (ESR), and/or C-reactive protein (CRP) level to evaluate for leukocytosis and systemic inflammatory response. If secondary to overlying viral conjunctivitis, a conjunctival swab for PCR or cultures may be considered.If autoimmune etiology is suspected, additional labs could include antinuclear antibody (ANA) screen, SS-A/SS-B antibodies, and serum IgG4 level may be requested. In less severe cases when Thyroid Eye Disease is suspected, a thyroid function test panel with autoimmune antibodies may also be requested.

Depending on the severity of the presentation, therapy could range from warm compresses and symptomatic treatment for viral dacryoadenitis. Bacterial dacryoadenitis will require systemic broad spectrum antibiotics and when indicated abscess drainage. . Rarely, oral corticosteroids may be considered especially if in children and strongly suggestive of viral/idiopathic dacryoadenitis. If atypical infections are considered or for persistent lacrimal gland involvement, a low threshold for tissue diagnosis should be held

Close follow up is warranted if there are orbital signs including decreased visual acuity, pain with eye movements, relative afferent pupillary defect, or abnormal color vision.

Although typically reserved for severe or recurrent cases, a trans-septal or trans-conjunctival biopsy of the lacrimal gland may be of diagnostic value if the etiology is in question.[1][2] A detailed histopathologic assessment of the tissue obtained for specific orbital inflammatory disease such as sarcoidosis, IgG4-related disease and for tumors should be performed. When an abscess is suspected clinically or radiologically, drainage should be performed with material sent for stains and microscopy including staining and culturing for acid-fast bacilli.

The most common complications arise from misdiagnosis or delayed diagnosis of specific lacrimal gland inflammatory or neoplastic pathology. There is limited data on complications of viral dacryoadenitis, however one case series reported ptosis affecting some patients, as well as a measurable (but clinically insignificant) decrease in tear production.[3] When clinical behavior and response is inconsistent with typical clinical course or biopsy non-contributory, a repeat biopsy including representative tissue should be considered.