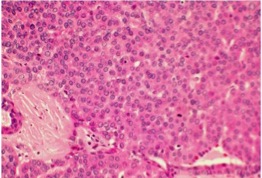 In one study by Ahmad and Esmaeli, a retrospective review of 53 cases of adenoid cystic carcinoma were classified according to the American Joint Committee on Cancer Classification to evaluate predictive outcomes of treatment and local recurrence.[1] The study concluded that prognosis was worse for patients with >T3 tumors (Fig. 5) with higher incidence of recurrence and metastasis despite aggressive treatment. Poor outcome was also noted in patients who had basaloid variant and perineural invasion. For patients with >T3 tumors, local recurrence was higher in patients treated with globe preserving surgery compared to those who underwent orbital exenteration and radiotherapy. Earlier studies by Wright, Rose, and Garner on 38 patients from Moorfields Eye Hospital in London,[2] and Font, Smith, and Bryan on 21 patients with adenoid cystic carcinoma seemed to also favor aggressive surgical intervention with radiotherapy.[3] Ahmed and Esmaeli attempted to distinguish more advanced tumors from less invasive tumors, and although the study was less conclusive for <T3 tumors, globe preserving surgery with radiotherapy seemed to provide local and regional control.

In cases of advanced tumors with high risk of recurrence, neoadjuvent intraarterial chemotherapy with cisplatin and doxorubicin has been used with exenteration and irradiation. In a small study by Tse et al comparing additional intraarterial cytoreductive chemotherapy in 9 patients compared to conventional surgery and radiotherapy, the study concluded that the 5-year carcinoma specific death rate (16.7% compared with 57.1% respectively) and recurrence rate (23.8% compared with 71.4% respectively) was significantly lower in patients treated with intraarterial cytoreductive chemotherapy.[4] Although adjuvant chemoradiation is often routinely employed in other head and neck tumors, there is limited data on the efficacy of this modality in adenoid cystic carcinoma of the lacrimal gland.

In cases where minimal residual tumor remains after surgical intervention, brachytherapy with iodine-125 (I-125) plaques has also been used. In a small study by Shields et al of 4 patients with microscopic residual tumor after excision, brachytherapy with I-125 plaques with a target dose of 50 Gray was applied.[5] Of the 4 patients, 3 had tumor control while one patient required exenteration for recurrence separate from the area of treatment.

Although promising initial data, there is currently insufficient conclusive data on this modality of treatment. 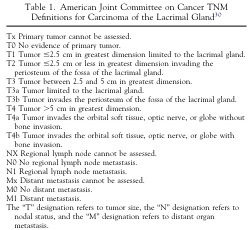 Literature has cited predictors for prognosis including basaloid variant, tumor stage, perineural invasion, age, and presence of apoptotic markers. The often cited study by Gamel and Font indicated a 5-year survival rate for basaloid variant was only 21% as compared to other variants where the survival rate was 71%.[6] Similar findings have been noted in subsequent studies. Multiple studies have also concluded that more advanced tumors, especially with neural invasion results in a poorer prognosis with higher likelihood of recurrence and metastasis even with invasive treatment. However, in one case by Tellado et al, 11 cases of adenoid cystic carcinoma in patients 18 years or younger demonstrated that younger patients had a better prognosis possibly due to less aggressive histology including less basaloid variant and less perineural invasion.[7] In another study by Strianese, the presence of apoptotic markers with down-regulation of p53 and up-regulation of Bcl-2 was also associated with worse prognosis and survival rates.[8]