Sympathetic ophthalmia (SO) is a rare, bilateral, granulomatous uveitis caused by exposure of previously immune-privileged ocular antigens from trauma or surgery with a subsequent bilateral autoimmune response to this tissue. The injured or operated eye is the exciting eye and the contralateral eye is the sympathizing eye. The concept was first described by Hippocrates and the earliest references can be traced back to the 1500s.[1][2][3] It wasn't until the 1900s that an association with non-trauma-related ocular surgery was published and that a systemic autoimmune etiology was suspected.[4][5][6] Several historical figures are hypothesized to have suffered from sympathetic ophthalmia, including Louis Braille, the inventor of modern Braille. His right eye was injured at the age of 3 when he was playing with a knife, and he subsequently lost vision in both eyes by the age of 5, presumably from sympathetic ophthalmia.[7]

Prior trauma and introacular surgery are the causes of SO. A growing list of procedures has been associated with this disease and virtually any intraocular event can incite the autoimmune process. Vitrectomy and cyclodestructive procedures have been associated with potentially higher rates and some authors suggest specifically discussing the risk of sympathatic ophthalmia during informed consent.[8][9] The interval between the time of injury and the onset of symptoms is variable and has been reported to be from 5 days to 66 years, although the vast majority of cases occur within the first several years. [10][11][12] Due to the rarity of the disease, variable presentation and potentially long duration between inciting event and disease process, the epidemiology of sympathetic ophthalmia remains poorly understood. 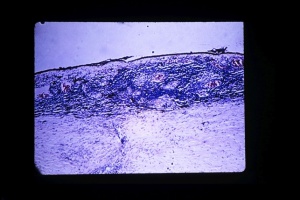 Note the diffuse, granulomatous inflammation of the choroid with sparing of the choriocapillaris.

The injured eye is the exciting eye and the fellow eye is known as the sympathizing eye. The primary inlfammatory mediators are thought to be T cells that invade the uveal tract. Studies have shown that an initial wave of infiltrative cells is composed of CD4+ helper T cells[13] and a later wave of CD8+ cytotoxic T cells[14]. Furthermore, in vitro testing has shown proliferative T cell responses to uveal melanocytes in the peripheral blood of patients with sympathetic ophthalmia.[15] The inflammation is usually granulomatous and the choroid is diffusely thickened with lympochytes, nests of epithelioid cells and multinucleated giant cells. The epithelioid cells and giant cells often contain melanin pigment. The inflammatory process does not usually involve the choriocapillaris (in contrast to Voyt-Koyanagi-Harada syndrome) or the retina. Dalen-Fuchs nodules, which are clusters of epithelioid cells containing pigment lying between the RPE and Bruchs membrane, are also seen. Anteriorly, the iris can appear thickened with nodular infiltrations. [16]

There has been debate regarding the only known means of preventing sympathetic ophthalmia, i.e. removal of the injured eye shortly after the traumatizing event. The goal of enucleation or evisceration is to prevent exposure of uveal and retinal tissue to the immune system.[17][18] Enucleation has historically been then treatment modality of choice out of concern that evisceration might leave behind residual uveal tissue. However, an evisceration is easier and quicker to perform, and arguably has better functional and cosmetic results.[19] To support the argument that evisceration is a viable alternative are case series of positive outcomes.[20][21] Also, the logical argument that since evisceration is a viable treatment option in non-trauma-causes, then the uveal tissue left behind on routine, non-trauma-related eviscerations likely isn't sufficient to promote a SO response; otherwise, one would expect higher rates of SO following all eviscerations. Finally, some authors argue against removing the eye because of the rarity of SO and the effective modern treatment options. Also, the exciting eye may also have useful vision after therapy.[22] There is no known benefit to removing the exciting eye after the onset of sympathetic ophthalmia.

Patients typically present with non-specific symptoms of ocular inflammation, including blurred or decreased vision, pain, photophobia and conjunctival injection. Typically, reduction of near vision is an early symptom. The onset can be insidious or acute. A thorough ocular history plays an important role in the diagnosis of sympathetic ophthalmia as the patient will have a history of trauma or surgery, either recently or in the remote past. Evidence of prior trauma on examination can also aid in the diagnosis of SO when history is incomplete. 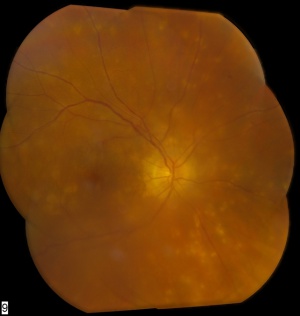 This fundus image of a patient with sympathetic ophthalmia demonstrates vitritis and a multifocal choroiditis.

Sympathetic ophthalmia is characterized by inflammation involving any part and most of the uveal tract. Anterior segment findings include keratic precipitates, anterior chamber reaction, posterior synechiae and the development of a cataract. In eyes with chronic inflammation, either elevated pressures from inflammatory glaucoma or hypotony from ciliary body shutdown can develop. Posteriorly, patient can develop vitritis, papillitis, multifocal choroiditis, Dalen-Fuchs nodules, multiple exudative retinal detachments, macular edema, choroidal neovascularization and epiretinal membranes.[23][24] In severe cases, the eye can become phthisical. The exciting eye, if still present, may show evidence of prior surgery or injury and can steer the clinician to suspect SO. Patients may also have systemic findings. In a large retrospective study out of China, 24% of patients with SO had meningismus, 25% tinnitus, 20% dysacusis, 13% alopecia and 11% poliosis.[25] Only retinitis and retinal vasculitis are not typically seen in SO.

Optical Coherence Tomography (OCT) can be utilized to evaluate and follow serous retinal detachments. [26] OCT can also help monitor for macular edema and the developement of choroidal neovascularization. Enhanced depth OCT can dentify pachychoroid. Disruption of the interdigitation zone (IZ) and ellipsoid zone (EZ) on OCT may precede clinical signs of uveitis. The underlying retinal pigmented epithelium is typically not straight and usually have undulations or convexity towards the retina. Typically, miltifocal pockets of subretinal fluid are noted. Bacillary layer detachment[27] as seen in Vogt Koyanagi Harada disease may also be noted.

Fluorescein angiography can show multiple areas of pinpoint hyperfluorescence, which leak on later phases in areas that correspond to the serous retinal detachments seen clinically.

The most common alternate diagnosis is Vogt-Koyanagi-Harada syndrome (VKH). Patients with VKH lack a history of antecedent trauma, have higher rates of systemic findings and also typically follow the pattern of early posterior findings with later anterior inflammation.[25] Other diagnoses on the differential include tuberculosis, syphilis and depending on the presentation, numerous other causes of inflammation. The infectious causes of uveitis must be ruled out prior to initiating treatment for sympathetic ophthalmia due to the risk of worsening the underlying infection with immunosuppression.

Corticosteroids are the mainstay of treatment. Steroids should be initiated as soon as the diagnosis is made in the absence of other contraindications and once infectious workup is negative. In acute stage, intravenous methylprednisolone pulse therapy reduces the posterior segment changes rapidly.

Along with corticosteroids, immunomodulators such as cyclosporine or azathioprine should be used. SO is one of the few indications where immunomodulatory therapy should be started at the initial presentation only.

Patients should be followed closely and may need to be admitted if they cannot follow up or take the medications as prescribed. Patients should be seen often until they begin to stabilize and improve at which point visits can be spread out.

Sympathetic Ophthalmia is a serious vision-threatening disease. Half of all patients will have 20/40 or worse vision and one third of all patients will end up legally blind.[28] However, with modern therapy, there is plenty of hope for patients diagnosed with this disease. Even the exciting eye can have reasonable visual outcome with prompt and aggressive treatment.[29][22]