Acute posterior multifocal placoid pigment epitheliopathy (APMPPE) is an inflammatory chorioretinopathy which was first described by Gass in 1968 [1]. It is classified as a White Dot Syndrome and is uncommon, with an estimated incidence of 0.15 cases per 100,000 persons [2][3]. APMPPE is usually bilateral, affects women and men equally, has a tendency to occur between the 2nd to 4th decades, and can have associated systemic conditions. The most common complaint is blurred vision with central or paracentral scotomas, which may be associated with a flu-like prodrome and headache. Other visual symptoms can include photopsia and metamorphopsia. The classic finding on DFE is creamy yellow or grey-white placoid lesions at the level of the RPE in the posterior pole [4]. Cases are often self-limited and visual symptoms resolve by 4 to 8 weeks. There is no consensus on treatment, however steroids have been attempted to hasten visual recovery especially in cases with macular involvement or with neurological symptoms due to a risk for comorbid cerebral vasculitis [5]. Recurrence is rare, but typically has been reported with worse prognosis and a diagnosis of relentless placoid chorioretinitis should be considered if persistent beyond 6 months [3].

Several hypotheses regarding the underlying aetiology for APMPPE have been proposed. In its original description in 1968, Gass chose the term ‘Pigment Epitheliopathy’ to reflect what he thought was the tissue most significantly affected. [1] Following the development of fundus fluorescein angiography, Van Buskirk et al,[6] and Deutman et al[7] proposed choriocapillaris ischemia as the more likely primary etiology. However, a direct neurotropic infection hypothesis has recently been proposed by Steptoe et al. [8] In contrast to a primary choriocapillaris pathology, changes within the retinal nerve fibre layer were demonstrated to occur prior to changes within the outer retina and the occurrence of axonal spheroids described to occur along the unmyelinated photoreceptor axons which constitute the Henle fibre layer. [8]

Approximately 33% of patients report a preceding viral or flu-like illness prior to APMPPE symptom onset [1][9]. APMPPE has been described in cases of thyroiditis, erythema nodosum, granulomatosis with polyangiitis, polyarteritis nodosa, nephritis, sarcoidosis, scleritis, ulcerative colitis, central nervous system (CNS) vasculitis, and post-vaccination [10][11]. Culprit vaccinations may include Polio, Tetanus, varicella, hepatitis A, hepatitis B, meningococcal C, yellow fever, typhoid, and influenza [12]. Other infectious associations include group A streptococcus, adenovirus-5, influenza, coxsackie-B, influenza, hepatitis B, Lyme disease, mumps, and tuberculosis. Genetics may play a role in an individual’s risk for APMPPE as several associations have been reported including HLA-B7 and HLA-DR2 genetic haplotypes [13].

The exact pathogenesis is controversial. An older theory, proposed by Gass, posits that inflammation in the outer retina and RPE produces the APMPPE phenotype of characteristic placoid lesions [1]. A second theory proposed by Van Buskirk is an occlusive vasculitis, potentially due to inflammatory or autoimmune processes, at the level of the choriocapillaris resulting in hypoperfusion and ischemia of the RPE and photoreceptors. Ischemic injury to the RPE and outer retina then yields the characteristic placoid appearance [14]. In later stages, the inflamed choroid and retina manifests with RPE atrophy and hyperpigmentation [9]. Thus, the prevailing theory argues that a primary affectation of the choriocapillaris leads to secondary injury of the RPE and outer retina. The end result of the disease process is atrophy of the choriocapillaris, RPE, and photoreceptors. Of note, some authors have argued that choroidopathy may be a more appropriate name than epitheliopathy [5].

There are no recognized preventative measures. 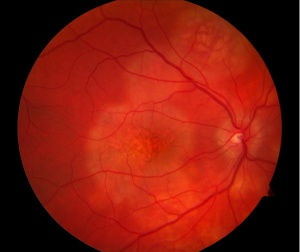 Patients typically notice a rapid onset of blurred vision associated with central and paracentral scotomas. Photopsias and metamorphopsia have been reported prior to vision loss [4]. Symptoms are usually bilateral, asymmetric and can occur several days apart. Visual acuity can range from 20/40 to count-fingers depending on the extent of foveal involvement. Headache and other neurological symptoms, such as sensorineural hearing loss [15], may be noted and may appear months after the ocular involvement. All patients with a new diagnosis of APMPPE should receive a full neurologic and systemic work-up to evaluate for CNS vasculitis and other associated systemic conditions. APMPPE-associated cerebral vasculitis can be fatal. Other associated CNS disorders that are sometimes associated with APMPPE include optic neuritis, peripheral vestibular disorders, meningoencephalitis, seizures, venous sinus thrombosis, intracerebral hemorrhage, and CVA/TIA [15][16].

Anterior segment exam is usually normal, though anterior uveitis can be present. There may be mild vitritis present in 50% of cases. Fundoscopic examination typically shows multiple bilateral creamy yellow-white placoid lesions at the level of RPE and choroid 1-2 disc diameters throughout the fundus, posterior to the equator (generally within the posterior pole). The lesions gradually fade over the course of 1-2 weeks. New lesions may appear in the periphery up to 3 weeks following onset (radially or linearly). Papillitis may occur, but cystoid macular edema is uncommon.

Additionally, CNS imaging should be performed to rule out CNS vasculitis in all patients with a new diagnosis of APMPPE.

A case with imaging has been presented at https://www.aao.org/eyenet/article/the-case-of-aches-and-pains-and-blurry-vision 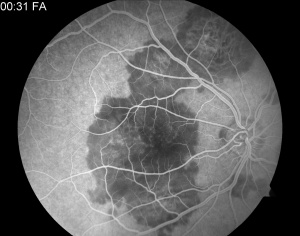 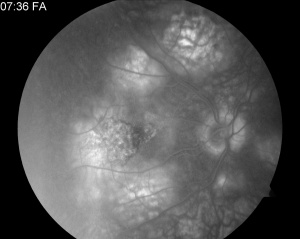 Other White-Dot syndromes can resemble APMPPE. In particular, APMPPE, relentless placoid choroiditis, and serpiginous choroidopathy are all characterized by creamy yellow-white placoid lesions with similar imaging and angiographic characteristics [3]. These include, but are not limited to:

SD-OCT: outer retinal hyper-reflectivity extends from the outer plexiform layer to the RPE. Disappearance of the EZ zone may occur with involvement of the fovea (Copyright © 2020 Mariana A. Oliveira et al. Reproduced without modifications from an open access article, Management of Acute Posterior Multifocal Placoid Pigment Epitheliopathy (APMPPE): Insights from Multimodal Imaging with OCTA, distributed under the Creative Commons Attribution License)

APMPEE is self-limiting with a generally good prognosis with the majority of affected patients achieving a visual acuity of 20/40 or better. Visual recovery typically takes 4 weeks, but can extend to 6 months in some patients. A recent review by Fiore T el al. analyzed 183 articles related to APMPPE and concluded that 25% of patients had a visual acuity of 20/50 or worse. Importantly, foveal involvement confers a worse visual prognosis [5]. Other atypical features, including age older than 60 years, unilaterality, an interval before involvement of the second eye of at least 6 months, recurrence of the disease, and leakage from choroidal veins, may also portend a poorer prognosis [23]. There is no current consensus on treatment to stymie loss of visual acuity in APMPPE. However, steroids have been utilized and reported to be beneficial in cases of foveal involvement and associated CNS vasculitis [5]. Some physicians opt for steroids even in the absence of these two features. Future studies are needed to evaluate dosage, duration, and effects of steroid treatment. All patients with a new diagnosis of APMPPE should receive a full neurologic and systemic work-up to evaluate for CNS vasculitis and other associated systemic conditions, particularly autoimmune and infectious diseases outlined in the Risk Factors section.

OCT-A: flow detected at the level of the choriocapillaris is disrupted in active lesions (baseline) and can improve with time or treatment in patients with APMPPE (left panel: OD; right panel: OS). (Copyright © 2020 Mariana A. Oliveira et al. Reproduced without modifications from an open access article, Management of Acute Posterior Multifocal Placoid Pigment Epitheliopathy (APMPPE): Insights from Multimodal Imaging with OCTA, distributed under the Creative Commons Attribution License)

Recurrent or chronic APMPPE may represent relentless placoid chorioretinitis, also known as ampiginous choroiditis, a disease that shares characteristics with APMPPE and serpiginous choroidopathy. It has a high recurrence rate, longer period of disease activity, and numerous multifocal lesions (>50) scattered throughout the fundus [3]. Correct diagnosis here is important, as the relapses of RPC and SC may warrant treatment with immunomodulatory therapy [20][24].