The main symptoms of IIH are headache and transient visual obscurations due to papilledema. Severe cases of IIH left untreated can lead to permanent visual loss due to papilledema. CSF diversion techniques can reduce ICP in IIH including both ventriculoperitoneal (VP) and lumboperitoneal shunt (LPS). Shunting procedures seem to be temporizing measures in IIH and eventual shunt failure/malfunction is a relatively common occurrence in IIH.

While it is difficult to estimate the life span of LPS failures, most sources report an average of 5-10 years before shunt malfunction. [1] [2] Due to variable clinical presentation, cases where LPS failures are delayed lead to diagnostic challenges. [3]  Although many centers have shifted to the use of VPS over LPS for IIH, this article will discuss the issue of delayed LPS failure in IIH.

Obstruction, over drainage, mechanical failure, catheter migration, catheter fracture, abdominal complications, lumbospinal complications, and infections are commonly reported reasons for LPS revision. The use of Silastic catheters led to a dramatic decline in obstruction and shunt fracture rate contributing to further extensions of LPS lifespans. [1]Additional contributing factors to delays in shunt malfunction include decreased body mass index (BMI). According to one study, patients with a healthy BMI (<25.0) had a median shunt survival time of 44 months while the median shunt survival time for patients with a higher BMI was 18 months. This is most likely due to catheter placement below the peritoneum being more technically challenging in those who are obese. [2] Children are at a higher risk for developing complications due to increased mechanical stress or change the size of the shunt tubing in the thecal sac and a short catheter secondary to the child’s growth. Therefore, delayed LPS failure for IIH may be more common when initial shunt placement occurred in adulthood rather than in children. [3] 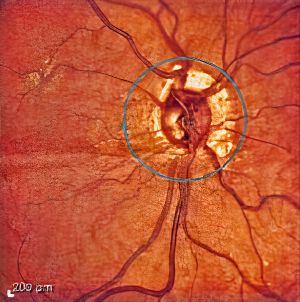 Like IIH, the most common symptoms of LPS failure are recurrent symptoms of increased ICP (e.g., headache, nausea/vomiting, diplopia, and visual loss). [4] Upon ocular examination, papilledema is the hallmark sign of IIH but does not have to be present in LPS failure. The papilledema is typically bilateral and symmetric, however unilateral, or asymmetrical cases may also occur. LPS malfunction may present with symptoms and signs of recurrent IIH including:

5. Choroidal folds with or without papilledema. [6]

A history and physical examination is key to localizing causes of recurrent IIH in patients with previous LP shunt procedures. A lumbar puncture with opening pressure should be considered. X-ray imaging (shunt series) can be performed on the abdomen and pelvic regions to potentially image either distal or proximal catheter fracturing in LPS. In comparison, the shunt series for VPS includes the head, neck, chest, and abdomen. Nuclear medicine studies to test shunt patency (“shuntogram”) may also be helpful. Neurosurgical consultation to check the integrity and function of the LPS is recommended in cases with potential LPS failure.

A complete neuro-ophthalmic examination should be considered in all cases of suspected LPS failure including ophthalmoscopy, optical coherence tomography (OCT), and automated perimetry.  The most common visual field defects seen in IIH are enlargement of the physiologic blind spot, nasal steps, and arcuate defects. [7]

Other causes of raised ICP other than LPS failure should be excluded in diagnosis of IIH:

In addition, there is overlap in both the symptoms and signs of intracranial hypotension (over drainage) and intracranial hypertension (shunt failure). Cases with high ICP often have headaches worse with lying down rather than low ICP where the headache is often worse withstanding. The presence of papilledema suggests elevated ICP; but sixth nerve palsy, blurred vision, and headache may occur in either over drainage or under drainage of CSF by an LPS.

LPS failure usually requires a shunt revision or replacement. Many institutions prefer VPS to LPS for CSF diversion in IIH due to lower rates of complications, lower revision rate, and decreased average hospital length of stay for LPS failure. Huang et al found that VP shunting improved or stabilized VA in IIH patients who presented with rapidly worsening vision or who had progressive visual loss despite medical treatment and ONSF. [8]

Within the literature, focal venous stenosis is present among 30%–93% of patients with IIH. Patients are considered candidates for stent placement with focal stenosis typically presenting in the transverse or sigmoid sinus. This procedure is technically feasible and highly effective, with a review noting improvement in headaches of as much as 88% and resolution of papilledema in 97% of patients. [9]

Medications such as acetazolamide (Diamox) can decrease ICP and can be used to temporize or treat patients even with an LPS. Further weight reduction and a low sodium diet are also recommended for IIH. Optic nerve sheath fenestration may be necessary for patients who fail, are intolerant to, or non-compliant with medical therapy, or who cannot undergo shunt revision.

The prognosis for shunt revision after delayed LPS failure is variable and depends in part on early diagnosis and treatment. A recurrence of symptoms may occur in up to 38 percent of patients after recovery from an episode of IIH or after a prolonged period of stability.