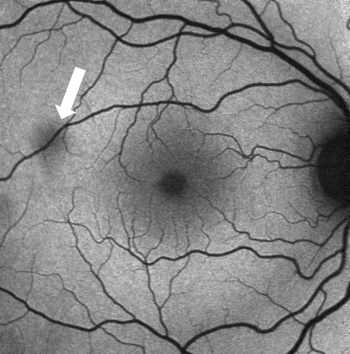 Fundus autofluorescence (FAF) is a non-invasive imaging modality that has become increasingly popular in both research and clinical settings due to its ability to map naturally and pathologically occurring fluorophores in the posterior pole. FAF was first utilized for in vivo fundus imaging in 1995 when Delori et al utilized a novel fundus spectrophotometer to characterize the intrinsic autofluorescent properties of the human retina.[1] Over time there have been many technological advancements that have allowed for the development of numerous commercially available FAF devices, with each device offering a unique set of advantages and disadvantages based on the imaging type utilized (e.g. confocal scanning laser ophthalmoscope, ultra-widefield confocal scanning laser ophthalmoscope, broad line fundus imaging, fundus camera), the excitation wavelength employed (e.g. green short-wavelength, blue short-wavelength, near-infrared) and the field of view desired.

Unlike fluorescein angiography, FAF does not require the injection of a fluorescein dye in order to image the retina, but rather utilizes the fluorescent properties of lipofuscin within the retinal pigment epithelium (RPE) to create an image. Lipofuscin, a byproduct of lysosomal breakdown of photoreceptor outer segments, is composed of numerous bisretinoids including A2E, A2PE, isoA2E, and A2-DHP-PE. When subjected to a light source, these bisretinoids absorb blue light with a peak excitation wavelength of 470nm and emit yellow-green light with a peak wavelength of 600nm, depending on the chemical makeup of the lipofuscin. A detector is then used to record the emission signals and create an image that acts as a density map of lipofuscin, with brighter areas representing regions of increased lipofuscin density. Since many retinal pathologies often lead to RPE dysfunction and an accumulation of lipofuscin, abnormal patterns of autofluorescence (AF) on FAF imaging can act as markers for retinal disease.

In a normal fundus without retinal pathology, blood vessels will appear dark since blood is able to strongly absorb the blue (~488nm) or green (~514nm) light that is typically used in FAF imaging. Depending on the device being used, the optic nerve will usually appear dark due to the absence of RPE or lipofuscin in this region. With blue or green short-wavelength FAF, the fovea will usually be visualized as a spot of hypo-AF due to the high concentration of light-absorbing xanthophyll pigment in this area. 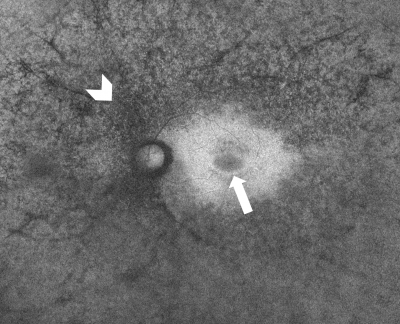 Abnormal fundus autofluorescence is any pattern of AF that deviates from the classic appearance of a normal fundus as previously described.

Abnormal regions of hyper-autofluoresence (AF) are a result of increased levels of lipofuscin/compounds with similar autofluorescent spectra, or increased transmission of fluorescence. Some notable causes of hyper-AF include:

Abnormal regions of hypo-autofluorescence (AF) are a result of decreased levels of lipofuscin, decreased RPE density, or blockage of fluorescence. Some notable causes of hypo-AF include:

FAF has become a particularly useful tool in the diagnosis and management of retinal dystrophies. For instance, using FAF alone, a neural network was able to discern eyes with Stargardt disease, Best disease and retinitis pigmentosa from healthy eyes with an accuracy of 95%.[2] In retinitis pigmentosa, FAF can sometimes demonstrate a hyperAF ring that constricts over time, acting as a marker of disease progression.[3] Currently FAF has clinical applications in a variety of retinal diseases, including but not limited to:

The clinical applications of FAF continue to expand as a result of ongoing research. For example, in patients with diabetic retinopathy FAF has been shown to demonstrate significant alterations that could not be observed on color imaging, suggesting that FAF may be useful in the detection of early changes associated with progression of retinopathy.[4] Furthermore, in patients with exudative age-related macular degeneration, patterns of FAF have been shown to predict anti-vascular endothelial growth factor (VEGF) therapy success.[5] Ultimately, this promising research suggests that the clinical utility of FAF imaging will continue to broaden into the future.

Unlike fluorescein angiography, FAF imaging does not require administration of intravenous fluorescein dye and therefore avoids possible complications such as pain, redness, nausea, vomiting, or pruritis. However, FAF does have several limitations. For instance, FAF has a signal strength that is approximately two orders of magnitude less than the signal seen in fluorescein angiography.[6] In addition, FAF imaging is susceptible to artifact from media opacities in the anterior segment or vitreous, making the interpretation of images in some patients difficult. Furthermore, given the variability in external lighting conditions, device settings, and type of device used to capture FAF images, comparing imaging findings between patients or in a single patient over time can be challenging. While quantitative fundus autofluorescence imaging devices have been used in research applications to help address this issue, this technology has yet to be widely implemented in the clinical setting.