Geographic atrophy (GA) is a chronic progressive degeneration of the macula, as part of late-stage age-related macular degeneration (AMD). The disease is characterized by localized sharply demarcated atrophy of outer retinal tissue, retinal pigment epithelium and choriocapillaris.[1] It starts typically in the perifoveal region and expands to involve the fovea with time, leading to central scotomas and permanent loss of visual acuity. It is bilateral in most cases. Over 8 million people are affected worldwide with GA, approximately 20% of all individuals with AMD. The incidence of GA is expected to rise as the age-burden of developed countries is increasing.

Several risk factors have been noted by several studies. The most pronounced risk factor is increasing age and family history of AMD. [2] Smoking history increases the risk of GA significantly. Both active smokers, but also former smokers are at greater risk of developing geographic atrophy. [3] One retrospective study through the Asian Eye Epidemiology Consortium found that GA is relatively uncommon in Asian populations when compared with those of European Ancestry. [4] This study also showed that the ratio of GA to neovascular AMD, another complication of advanced AMD, in the Asian population is lower (1:3) compared to that of the European population (1:1). Studies focusing on the United States have not found any gender difference in the prevalence of geographic atrophy, but the Asian Eye Epidemiology Consortium found a higher prevalence of GA in men. [2] [5][5] The Age-Related Eye Disease Study also found an increased risk of GA in users of thyroid hormones or antacids. People with higher education were at a lower risk of GA. Other studies have pointed out an increase in risk of GA in patients with coronary heart disease as well as in patients with lens opacities or previous cataract surgery. [6] The Comparison of Age-Related Macular Degeneration Treatments Trial (CATT) found that older age, hypercholesterolemia, worse visual acuity, larger choroidal neovascularization (CNV) area, retinal angiomatous proliferation (RAP) lesion, GA in the fellow eye, and intraretinal fluid were associated with a higher risk of incident GA. They also found that thicker subretinal tissue complex and presence of subretinal fluid were associated with slower development of GA. [7] 3 One of the strongest risk factors was poor visual acuity at baseline, specifically visual acuity at or worse than 20/200 had almost a 3-fold risk of developing GA than those with a baseline of 20/25-20/40.

The pathogenesis of GA remains unclear. The natural course of AMD begins with early stages that are characterized by presence of drusen that are yellow deposits between the retinal pigment epithelium and Bruch’s membrane. Pigment displacement is also seen. [8] Late stages of AMD is either characterized by choroidal neovascularization, or GA. GA is recognized as a sharply defined area in the posterior pole, with atrophy of the retinal pigment epithelium, the overlying photoreceptors and the choriocapillaris. The defect in structures allows the observer to see the larger underlying choroidal vessels.[9] Reticular pseudodrusen are associated with the development of GA [10]The progression rate of GA varies, but is relatively slow and progresses over years. As the atrophic area expands, visual function decreases. [11] Clinically, the exudative and non-exudative AMD are very different, but these late stages of AMD are not mutually exclusive. Individuals with GA are at a high risk of developing choroidal neovascularizations, and patients with exudative AMD are at an increased risk of developing atrophic areas.

The cause of GA is not fully known, though it has been studied extensively. Genetic and environmental factors seems to contribute substantially. Complement factor H variant Y402H and ARMS2 have been associated with increased risk of GA development. [12] [13] Drusen are shown to contain multiple complement components, [14][15] indicating that localized inflammation mediated by the complement system is an important element in AMD. This has been suggested to be a systemic immune-dysfunction, with retinal manifestation.[16] Oxidative stress and low grade inflammation seem to play a role in AMD. [17] [18][19]. In donor eyes with GA, choroidal T-lymphocytes and macrophages are noted to produce proinflammatory cytokines.[20] Furthermore, it has been found that mononuclear phagocytes are seen in abundance in the subretinal space in eyes with GA.[21] Their possible role in photoreceptor rescue or degeneration is unknown. Another recent study found that choroidal thickness may have a role in the pathogenesis of the unilateral form of GA, whereas Müller cells and their supported photoreceptors may play a role in bilateral GA. [22] New research is indicating that direct RNA toxicity, specifically Alu RNA mediated inflammation might play a significant role in the pathogenesis of GA.[23]

Ophthalmoscopy with visualization of the fundus, enables the trained ophthalmologist to observe drusen, as well as the atrophic area. In some cases, the atrophic area is unifocal, but in many cases, it shows as a multifocal disease within the macula area. 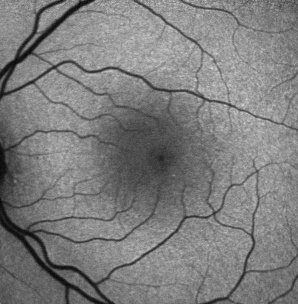 The clinical examination is key in diagnosing geographic atrophy, but other imaging techniques can be useful, especially in monitoring disease.

Fundus autofluorescense is currently the standard imaging technology to visualize the retinal pigment epithelium (RPE) in geographic atrophy. Vital RPE contains intracellular lipofuscin. When exposed to light at a specific wavelength, lipofuscin absorbs this, and emits light in another wavelength, from where the fluorescence signal originates. In the fovea, the signal diminishes physiologically, due to absorption by the macular pigment. If atrophy of RPE occurs, this causes a distinct dark area, due to absence of lipofuscin-containing cells, and therefore lack of fluorescent signal. These sharp contrasts between completely dark and light grey, has made it possible to introduce a semiautomated segmentation algorithm, to detect and quantify the size of the atrophic area. Previously the preferred method was to manually outline the borders. Besides helping quantify the atrophic lesion, fundus autofluorescense also provides important information on expected progression rate through the amount of hyperfluorescense noted in the junctional zone of the lesion. Hyperfluorescense is an accumulation of lipofuscin in the RPE cells and is thought to be due to suffering/dying cells, as it is typical to observe atrophy in the hyperfluorescent area. The amount of hyperfluorescense correlates well with the rate of GA progression.[24][25] 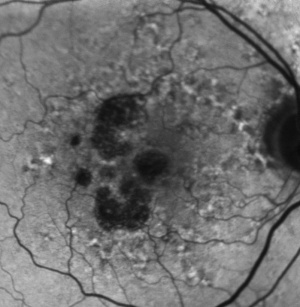 Optical coherence tomography (OCT) also provides important information. The atrophy of the retinal layers can be clearly seen with this non-invasive imaging technique; it has been demonstrated that some morphologic changes, such as a split between RPE and Bruch’s membrane in the junctional zone may be an indication of fast progression. Patients suffering from geographic are at a highr risk of developing choroidal neovascularizations, which can cause an even faster loss of visual function. Therefore, OCT can help in early recognition of intraretinal fluid, which is important in order to initiate treatment early. Measurement of visual acuity with a reading chart often provides poor information on the actual function of the retina, due to foveal sparing, and parafoveal scotomas. A better tool to evaluate the visual function is Microperimetry, a technique that stimulates themacula over 20 degrees, in various spots, with varying intensity of light, and the result depends on the patient’s ability to report recognition of the stimuli. In this way, low-luminance visual acuity and contrast sensitivity can also be measured. Studies using microperimetry have shown that the sensitivity of non-atrophic retina is decreased,[26] and that this loss correlates with progression of GA over time.[27]

In Multifocal electroretinography, light stimuli is performed in patterns across the retina, and photoreceptor signaling is detected by an electrode. By varying the light stimuli, the retina is mapped with information on functionality and sensitivity. Reading ability, or reading speed, can be quantified by the number of correctly read words in a limited amount of time. Radner and MNREAD reading charts are validated in several languages. Patients with GA and BCVA≥20/50 have shown to be significantly slower at reading compared to patients with intermediate AMD.[28]

At this time, there is no treatment available, medical or surgical, that can halt or reverse the progression of geographic atrophy. Visual rehabilitation is often necessary, even in cases of tolerable visual acuity, as contrast sensibility and reading ability can suffer in cases of foveal sparring and parafoveal scotoma.[29][30] Monitoring of intra or subretinal fluid is important in early diagnosis of choroidal neovascularization, as this group of patients are at higher risk. The AREDS study showed that patients with visual loss due to AMD were at high risk of developing neovascular AMD, and that AREDS2 vitamin supplements decrease the odds by 38% of developing neovascular AMD.[31] The study did not show any beneficial effects on slowing down the progression of geographic atrophy. Several therapeutic agents for GA are in phase II and III clinical trials, targeting oxidative stress or inflammation or complement pathways to reduce the rate of GA progression. Recent Phase III trials have evaluated intravitreal C3 inhibitors and found that they were effective in reducing growth of the lesion compared to sham injections, especially in eyes with extrafoveal GA. The data is currently under FDA review. Previously, other clinic trials found that lampalizumab, a selective complement factor D inhibitor, and tandospirone, a 5-HT1A agonist, were ineffective at reducing enlargement of lesions from GA secondary to AMD.[32][33] Orally administered alpha-lipoic acid, an antioxidant, was evaluated in a phase 2 clinical trial but did not have any beneficial effects on GA lesion size nor best-corrected visual acuity. [34] However, intravitreal brimonidine was shown to reduce GA lesion area growth within 3 months in a Phase 2 clinical trial.[35] Ongoing treatment trials include neuroprotective agents (Ciliary neurotrophic factor, Tandospirone, tetracycline dervatives) and visual cycle inhibitors ( Fenretinide, Emixustat) as well as stem cell research; a few may hold future promise in the halting the progression of geographic atrophy. [36] (NEED TO UPDATE CLINICAL TRIALS SECTION) 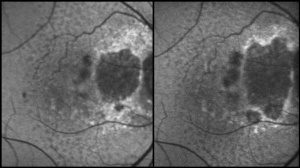 The prognosis is poor, as there are no available treatment, and the disease is chronic and progressive. Progression of GA is associated with extensive decrease in visual acuity, a study has shown that 31% of patients with GA lose at least three lines of vision in 2 years,[37] and the growth rate median is 2.1 mm2/year, but with variation up to 10.2mm2/year.[38] The rate of progression differs between patients, but signs of fast progression is high amounts of hyperfluorescense shown on fundus autofluorescence, and a decrease retinal function regarding contrast sensitivity or reading ability.