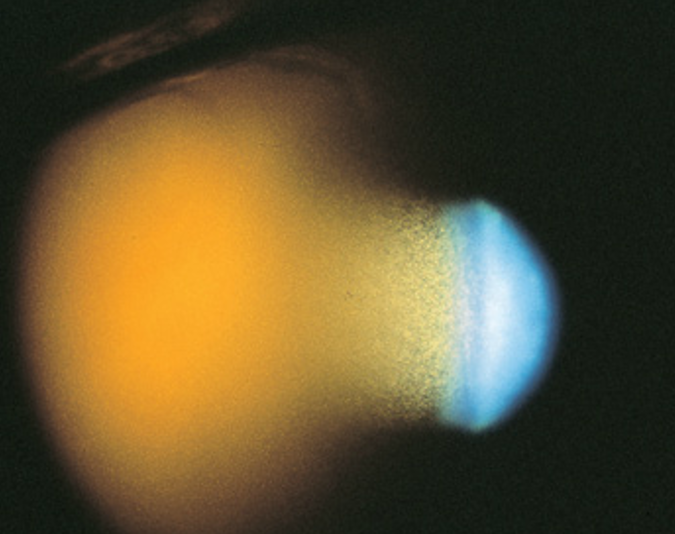 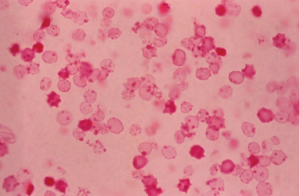 Histopathology slide of "ghost cells" with "Heinz bodies" which are clumps of denatured hemoglobin.

A constellation of histopathologic findings may develop in the vitreous following vitreous hemorrhage. After 3-10 days, red blood cell (RBC) clots undergo fibrinolysis and red blood cells may diffuse throughout the vitreous cavity. At this time, breakdown of red blood cells also occurs. The hemoglobin that remains within the cell denatures and forms clumps called Heinz bodies, which adhere to the inner surface of the plasma membrane. The extracellular hemoglobin also becomes denatured and clumped, often forming small to large accumulations that tend to adhere to vitreous strands. The adherence to and the entrapment within vitreous strands prevents these extracellular clumps of hemoglobin from moving freely and from passing into the anterior chamber. Loss of hemoglobin from the red blood cells produces ghost cells and hemoglobin spherules. During the conversion to the ghost cell form, intracellular hemoglobin is lost, presumably through leaky membranes, into the extracellular vitreous spaces. Ghost cells appear as small, spherical, khaki-colored cells and do not adhere to each other or to the vitreous strands and are free to move anteriorly. They gain access to the anterior chamber through a disrupted anterior hyaloid face, which can occur from previous surgery (pars plana vitrectomy, cataract extraction, or capsulotomy), trauma or spontaneous disruption. Ghost cells are generally 4 to 7 micrometers in size and less pliable than normal RBCs. As a result of their loss of pliability, ghost cells remain longer in the anterior chamber because their rigidity makes it difficult for them to escape through the trabecular meshwork. This causes obstruction of the trabecular meshwork and secondary glaucoma. The cells develop within 1-3 months of a vitreous hemorrhage. It is important to note that the presence of ghost cells does not necessarily lead to development of ghost cell glaucoma.

Ghost cell glaucoma is a clinical diagnosis. Diagnostic findings include presence of heme in the vitreous, ghost cells in the anterior chamber, delayed onset of increased intraocular pressure, an open angle on gonioscopy with possible presence of ghost cells layering over the trabecular meshwork inferiorly due to gravity , and often a disrupted anterior hyaloid face. Historically, the diagnosis of ghost cell glaucoma was made by phase-contrast microscopy* of anterior chamber (AC) aspirate, paraffin embedding after centrifugation of AC aspirate, or staining of the sample with 1 % methyl violet. Heinz bodies, spherical erythrocytes with denaturized hemoglobin granules bound to the internal surface of the cell membrane, are observed with H&E staining.

Ghost cell glaucoma was originally described by Campbell et al in 1976. Once it was also termed “hemophthalmitis” which was a misnomer as usually there is no evidence of active inflammation and this term has been since abandoned.

Clinically, patients present with intraocular pressure (IOP) spikes (as high as 60 to 70 mmHg) and a history of vitreous hemorrhage resulting from trauma, surgery, or preexisting retinal disease 1-3 months prior to presentation. The IOP may be markedly elevated, causing corneal edema. The anterior chamber is filled with small, circulating, tan colored cells. If fresh red blood cells exist, two or more different layers of cells are seen, with the lighter khaki-colored layer of ghost cells appearing on top of a heavier, red blood cell layer, imparting a candy-striped appearance. The cellular reaction appears out of proportion to the aqeous flare. The conjunctiva tends not be inflamed unless the IOP is markedly elevated or there is a history of previous surgery. Gonioscopy reveals either a normal appearing open angle; an open angle covered by a fine layer of khaki-colored cells, which have slightly to moderately discolored the trabecular meshwork; or a heavy layer filling the angle, generally inferiorly, with cells composing an early pseudohypopyon. The vitreous has the appearance of an old hemorrhage, with characteristic khaki coloration of RBCs and clumps of extracellular pigmentation from degenerated hemoglobin.

The symptoms relate to the etiology. Pain secondary to trauma or surgery may be experienced by the patient. However, less pain is reported than expected from a severely elevated IOP. Patients with high IOP may also present with blurry vision, headache, brow ache, nausea and/or vomiting.

The diagnosis of ghost cell glaucoma is usually clinical. The history and paracentesis with phase-contrast microscopy of the aspirate would confirm this diagnosis.

Hemosiderotic Glaucoma is a late onset glaucoma following intraocular hemorrhage with iron deposition in and damage to the trabecular meshwork. This extremely rare glaucoma is more chronic, does not have ghost cells in the anterior chamber, and is characteristically associated with a slight discoloration of the meshwork. It occurs many years after the original injury, in contrast to the ghost cell glaucoma, which occurs within weeks to months after the original injury.

Neovascular glaucoma is differentiated from ghost cell glaucoma by the absence of ghost cells within the anterior chamber and the presence of neovascularization at the papillary margin and in the angle.

The history of vitreous hemorrhage, disruption of the hyaloid face, a multitude of tiny khaki-colored cells, a relatively non inflamed conjunctiva, and an absence of keratic precipitates differentiates ghost cell glaucoma from uveitis and endophthalmitis.

Aqeous suppressants are the first line approach. Monotherapy or a combination of topical alpha adrenergic agonists, beta adrenergic blockers, parasympathomimmetics, prostaglandin analogues, and carbonic anhydrase inhibitors may be used. An oral carbonic anyhdrase inhibitor may be added. Intravenous Mannitol or Diamox may be used for extremely high IOPs in acute settings.  This may occur once cells reaccumulate in the trabecular meshwork after initial clearing.

Surgery might be required to clear the cell load from the trabecular meshwork. This can be accomplished by AC paracentesis and irrigation, pars plana vitrectomy (PPV), and/or a trabeculectomy.

If AC washout lowers the intraocular pressure successfully but the pressure rises again because of the further entrance of ghost cells from the vitreous, a washout of the AC can be repeated. If this relatively simple and safe procedure is unsuccessful, vitrectomy to remove the contents of the vitreous cavity may be required.

For refractory glaucoma caused by chronic obstruction of trabecular meshwork by ghost cells, trabeculectomy or usage of glaucoma drainage device is warranted.

If the IOP is uncontrolled, this may lead to optic nerve damage, however given the number of treatment options that are available, this is rare. Also, ghost cell glaucoma usually resolves once the hemorrhage clears.

Prognosis of ghost cell glaucoma is usually excellent as the condition is typically transient, although it may last many months. Eventually, the supply of erythrocyte ghosts in the vitreous cavity become exhausted and cells stop passing forward into the anterior chamber. If ghost cells linger, surgical treatment options are available as discussed above.