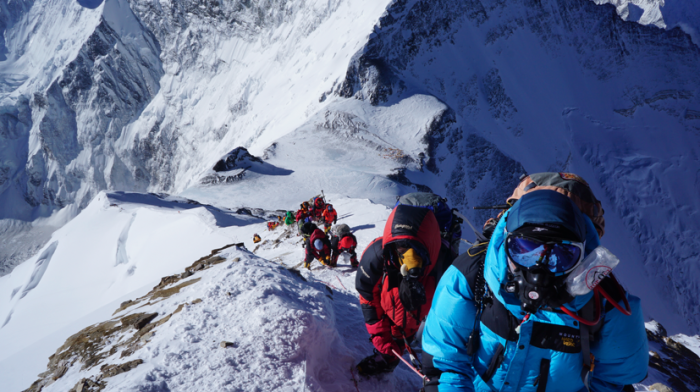 High altitude retinopathy (HAR) is one of four clinical entities of high-altitude illness (HAI) that includes acute mountain sickness (AMS), high altitude cerebral edema (HACE) and high altitude pulmonary edema (HAPE). HAI occurs with travel to elevations above 2500 meters (~8200 feet) and is generally characterized by symptoms of headache, nausea, vomiting and tiredness, but may affect the lungs, brain, and eyes differently among individuals.[1]

Various vascular compensatory mechanisms and pathological responses induced by hypobaric hypoxia, and potentially exacerbated by physical exertion and Valsalva effects, are believed to cause physiological and pathological retinal changes observed in individuals who ascend to high altitudes.[2][3] 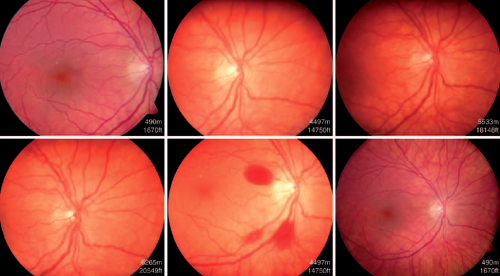 Independent risk factors for the development of altitude illness include:[4][5]

HAR has also been noted to occur more frequently in young and physically well-trained individuals, especially those undergoing strenuous activity at high altitudes.[9][10]

Typically, HAR occurs in patients who ascend to altitudes above 12,000 feet. [3] However, HAR can occur with ascents to altitudes less than 12,000 feet, especially in individuals with other risk factors, such as dehydration [11] or pre-existing medical conditions. For example, a patient with cystic fibrosis was reported to develop retinal vessel tortuosity and hemorrhage during a hiking trip at 4,900-9,800 feet.[12]

Use of non-steroidal anti-inflammatory drugs (NSAIDs) has been implicated as a possible risk factor for HAR, but studies are contradictory.[7][8]

Hypobaric hypoxia experienced at high altitudes induces a number of compensatory physiologic mechanisms to counteract the resultant hypoxemia. Such homeostatic mechanisms include an increase in cardiac output and ventilation; modification of blood flow by local and systemic auto-regulatory adjustments in regional vascular systems; a right shift of the oxygen-hemoglobin dissociation curve; and a later secondary polycythemia resulting in an increased hemoglobin concentration and hematocrit.[10]

Increased retinal blood flow, decreased retinal circulation time, retinal vasodilation and an absolute increase in retinal vascular blood volume are important auto-regulatory responses aimed at maintaining tissue oxygenation in eyes exposed to chronic hypoxia.[13] These regional compensatory responses typically cause a clinically observable increase in the diameter and tortuosity of retinal vessels and disc hyperemia, which are considered normal responses and are seen in almost all individuals at high altitude.[2][6] Choroidal vessels can also auto-regulate but early studies suggest that choroidal vessels do not operate normally at full-flow capacity.[14] Studies are providing more information as available tools to study the choroid are reported.

The development of HAR is hypothesized to involve systemic hypoxic effects on the eye despite regulatory attempts by the retinal circulation to achieve homeostasis. In addition to the physiological changes mentioned above, various superimposed pathological factors are thought to contribute to the development of HAR.[15] However, due to difficulties with experimentation at high altitude, the following may be based on retinal pathophysiology at normal oxygen concentrations and should be carefully considered as potentially hypothetical: 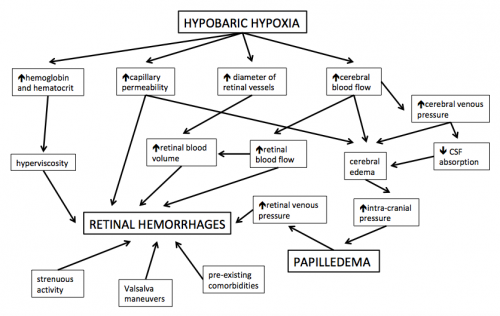 Retinal hemorrhages from capillary bursts or leakage from the arterial side of the retinal vascular bed are a predominant pathological finding in HAR.[6][25] These hemorrhages may be punctate or diffuse, intra-retinal or pre-retinal, and peripheral or central. The cause of the bleeding is not clear but one consideration is that low oxygen from shunting of blood or hypoperfused capillary beds stimulates expression of factors that increase vascular permeability, such as VEGF.

Small hemorrhages are initially punctate and intra-retinal with a flame-shaped or feathery appearance, following the anatomy of the nerve fiber layer.[18] More extensive vessel damage may result in larger or diffuse hemorrhages, which tend to be more prominent and well-defined and are often situated pre-retinal.[18] In cases where the posterior vitreous is not adherent to retina, bleeding may be dispersed into the vitreous cavity. [18] Retinal hemorrhages tend to occur peripherally but occasionally may involve the macula.[13] Differences in regional retinal blood flow and arteriovenous transit time are hypothesized to be the reason for this clinical finding.[13]

Vision loss in the setting of HAR may be the consequence of::

Scientific studies on molecular mechanisms of HAR are sparse.

A 2021 study by Su et al[27] identified genes and microRNAs (miRNAs) that are potential biomarkers for HAR using a series of integrated bioinformatics analyses and experiments involving hypoxia-induced cell culture. Human retinal microvascular endothelial cells (HRMECs) were cultured in a hypoxia chamber filled with an anaerobic gas mixture of 95% N2, 5% CO2, and 1% O2 for 12 hours. Control groups were cultured in 95% air and 5% CO2. The authors selected candidate HAR-related miRNAs and mRNAs by analyzing pre-existing datasets of acute mountain sickness (AMS) obtained from the gene Expression Omnibus (GEO). These included the miRNA expression profile GSE90500 and the mRNA expression profile GSE75665 obtained from blood samples of patients with acute mountain sickness (AMS) and volunteers without AMS. The study identified FOS, IL10, IL7R mRNAs, and seven miRNAs as candidate biomarkers of HAR. The expression of miR-3177-3p, miR-369-3p, miR-603, miR-495-3p, miR-495-5p, miR-4791, and miR-424-5p were significantly up-regulated in HRMECs cultured in hypoxia compared to normoxia. FOS, IL10, and IL7R were strongly down-regulated under hypoxic conditions. Further studies are required to determine if these findings are relevant in HAR.

Another study in 2017 by Xin et al[28] explored the effect of hypobaric hypoxia on the rat retina and determined whether resveratrol had a protective effect on hypoxia-induced retinal damage. The study reported that hypobaric hypoxia increased the expression of thioredoxin 1 (Trx1) and thioredoxin 2 (Trx2) in the retina, and resveratrol treatment significantly inhibited the increased expression levels. In addition, hypoxia led to upregulated mRNA expression of caspase3, caspase9, heat shock protein 70 (Hsp70), heat shock protein 90 (Hsp90) and hypoxia-inducible factor-1 (HIF-1). Resveratrol significantly decreased the expression of caspase3, HSP90, and HIF-1 mRNAs. The investigators proposed that resveratrol acted as an anti-oxidant by modulating hypoxia-induced stress-associated gene expression levels and as an anti-apoptotic agent by regulating apoptosis-related cytokine mRNAs. The authors suggested that resveratrol might have a role in the prevention and treatment of high-altitude retinopathy.

Avoidance of ascent to high altitude.

The severity of HAR may be mitigated by acclimatization, slower ascent, maintenance of higher SpO2 (e.g. with supplemental oxygen) and avoidance of strenuous activities, Valsalva maneuvers and NSAIDs while at high altitude.[6][7][8][9][10]If symptoms of high altitude such as visual disturbances, nausea and headaches occur, descent to lower altitude may be considered and is recommended. Treatment for comorbid conditions (i.e. obstructive sleep apnea [29]) that put patients at risk for retinal or optic nerve vascular events has also been suggested, especially with repeated high-altitude exposure for patients particularly at risk.

Current or recent ascent to high altitude, with or without associated visual complaints. It has also been reported after a high-altitude flight. [30]

Clinical features of HAR are apparent on dilated fundus examination.

Color fundus photographs in a case of high altitude retinopathy, demonstrating optic disc swelling in both eyes and retinal hemorrhages in the right eye. (© 2019, Manju Benjankar.[31] Used under a Creative Commons Attribution License.)

Signs of HAR were first described by Singh in 1969, typical features include:[32]

Cotton wool spots, Roth spots and retinal vein occlusions (both branch and central) have also been described in association with HAR.[5][7][8][9] Central retinal artery occlusion has also been reported, [37] as well as being associated with optic neuropathy including non-arteritic anterior ischemic optic neuropathy (NAION). [29]

These findings may persist for weeks after return to baseline altitude and resolve with time. [38][33]

Barthelemes et al[7] published a case series of 28 patients, who underwent fundus photography along their ascent and descent of Mt. Austagh Ata (24, 751 ft). Few retinal hemorrhages were noted during the ascent. However, retinal hemorrhages increased during the descent. In this study, 79% of patients exhibited retinal hemorrhages, most of which were detected after return to base camp from a high altitude.  Significant correlations with decreased oxygen saturation and increased hematocrit were noted. Due to the delayed appearance, the authors suggested that retinal hemorrhages should not be considered a warning sign of impending high-altitude illness. This finding is consistent with Singh et al’s observational study, which demonstrated a time lag of six to 96 hours between arrival and onset of symptoms of acute mountain sickness (AMS).[32] The time lag between arrival of high altitude and onset of signs and/or symptoms suggest HAR or AMS may not be directly or solely related to hypoxia.

Wiedman and Tabin established a classification system for HAR in 1999, based on progressive severity of clinical signs:[39]

Affected individuals are usually asymptomatic. Infrequent symptoms may include: sudden painless onset of floaters, blurring and/or loss of vision.

Based on the identification of typical retinal changes in an individual with current or recent ascent to high altitude. May be an incidental finding or be prompted by the onset of new visual complaints.

Fundus fluorescein angiography in a case of high altitude retinopathy (same case as above), demonstrating active disc hyperfluorescence in both eyes and areas of hypofluorescence corresponding to retinal hemorrhages in the right eye. (© 2019, Manju Benjankar.[24] Used under a Creative Commons Attribution License.)

High altitude retinopathy (HAR) is predominately a clinical diagnosis but ophthalmic imaging and visual field testing have been used to define the extent, severity and complications of the condition, as well as to monitor for follow up. These include:

Blood tests are generally not indicated for diagnostic purposes but may reveal elevated hemoglobin concentration and hematocrit. 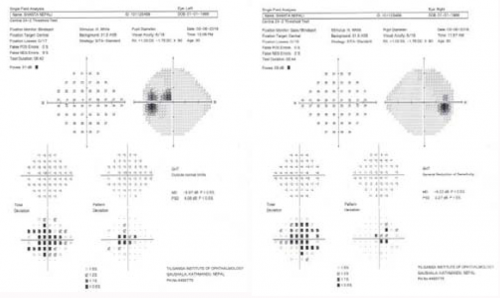 Automated visual field analysis in a case of high altitude retinopathy (same case as above), demonstrating a central scotoma in the left eye and a normal field in the right eye. (© 2019, Manju Benjankar.[24] Used under a Creative Commons Attribution License.)

The majority of cases of HAR resolve spontaneously with no long-term adverse visual outcomes.[6][7] Besides the general measures mentioned above, no specific therapies for HAR have been proven, although it may be necessary to treat the acute manifestations of altitude illness or the chronic ocular complications of the condition (e.g. retinal vein occlusion). Medications such as NSAIDs, corticosteroids and acetazolamide have been shown to have no impact on retinal hemorrhages[7] The use of furosemide is inconclusive.[26]

Follow up is generally not necessary but may be required in certain cases to monitor and/or treat complications.

Surgical management of HAR has not been described.

Although HAR itself has no systemic complications, the severity of retinopathy has been shown to correlate with the development of high altitude cerebral edema (HACE) and high altitude pulmonary edema (HAPE), and these life-threatening conditions should always be considered in individuals at high altitudes.[9][39] Despite these observations, the usefulness of HAR as a predictive tool for the more severe manifestations of altitude illness remains uncertain.[18]

Figures for both the incidence and visual prognosis of HAR vary widely. HAR has been documented to occur in anywhere between 0-79% of individuals ascending to high altitudes[7][13] Various individual- and ascent-related factors are likely responsible for these disparate findings. Visual prognosis is therefore likely dependent on similar factors. In a single study, 75% of individuals with HAR had full visual recovery at 12 weeks; 19% had only partial visual recovery even at 24 weeks; and 6% showed no visual recovery at 24 weeks.[9] Numerous other studies have reported lower rates of adverse visual outcomes.[2][6][7][8]