A cataract is a pathologic condition in which the lens of the eye becomes opacified causing changes in vision that may include blurriness, color changes, halos around light, and at its worst blindness. There are many causes and risk factors for developing a cataract, however the most common cause is a senile cataract in which the clouding of the lens is caused by aging[1]. For this reason, it is not surprising that cataracts are a leading cause of blindness worldwide affecting over 20 million in 2010, with the incidence projected to increase[2]. Prior to the 1700s some people thought cataracts were caused by opaque liquid material flowing through the lens hence the etymology of cataract is from the Latin word “cataracta” which means waterfall - or perhaps because sometimes a dense cataract can resemble one to the imaginative viewer[3].

When cataracts cause visual impairment, surgical intervention is currently the only method for treatment. Fortunately, because of advances in technology, cataracts can now be removed and replaced with an intraocular lens (IOL) with a low complication rate. 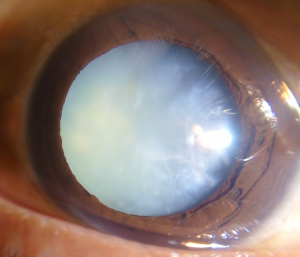 One of the earliest surgical interventions for cataracts, dating as early as the 5th century BC, was a technique called couching, which comes from the french word “coucher” meaning “to put to bed.” In this method, a sharp needle is used to pierce the eye near the limbus until the provider can manually dislodge the cataract - typically into the vitreous chamber - and out of the visual axis.

However, the lack of aseptic technique and rough nature of the procedure resulted in poor outcomes[4]. Some common complications include secondary glaucoma, hyphema, endophthalmitis, and often results in blindness. Unfortunately, couching is a traditional procedure that is still used today in parts of the world like Northern Nigeria and West Africa due to a multifactorial combination of unfamiliarity of modern procedures, fear of surgery, and preference of relying on traditional methods[4][5].

While many used the couching technique, there are texts as early as 600 BC that document the use of a primitive extracapsular cataract extraction (ECCE) - meaning the lens is removed and the lens capsule is left in place - by an Indian surgeon named Sushruta. A translation of the original text in Sanskrit discloses the following operative technique: a sharp needle punctured the eye through the aqueous humor until reaching the capsule of the lens where the surgeon would make an incision. The patient was then instructed to valsalva with a closed nostril until lens material came out of the incision and the patient’s vision improved. Postoperatively, indigenous roots and leaves were applied in a bandage and the patient was instructed to lie flat and avoid strenuous activities including cough and sneezing[6].

For centuries despite some documentation of primitive ECCE, couching was the main procedure for cataracts until 1747 when French surgeon Jacques Daviel, often credited as the father of modern cataract extraction surgery, performed an ECCE. He would make a corneal incision > 10 mm with a corneal knife, then use a blunted needle to puncture the lens capsule, and extract the lens using a spatula and curette. Post operative care included dressing the eye with a cotton dressing soaked in wine and lying in a darkened room for a few days. Although this was a great advancement from couching, significant complications were prevalent such as posterior capsular opacification, retained cataracts, and infection[4] [7].

While Daviel was credited as the first to perform ECCE, in 1753 a London surgeon by the name Samuel Sharp is the earliest documented to perform intracapsular cataract extraction (ICCE), this involves the removal of the opacified lens and the surrounding capsule in one piece. There are different variations to this method but essentially all of them require lysing the zonular fibers that support the lens capsule and followed by subsequent removal of the lens-bag complex through a large limbal incision. Unfortunately, because the lens capsule acts as a barrier between the anterior and posterior chamber, its removal often causes vitreous prolapse and subsequent retinal detachments among other complications. Furthermore, removing the lens and capsule in one piece requires a large incision, resulting in longer healing times and higher infection rate[4].

An important function of the natural lens is to refract light waves so that they are focused on the retina, providing a clear image. Patients without such lenses are considered aphakic and before the advent of intraocular lenses (IOLs) required often high-powered, bulky spectacles, which often led to poor visual quality. In fact, Sir Harold Ridley exclaimed that “extraction alone is but half the cure for cataract.” During World War II, Dr. Ridley observed that one of the Royal Airforce pilots had sustained shrapnel ocular trauma from plastic and despite having a foreign body, remained largely asymptomatic for years. This inspired a collaboration with the Plastics Division of Imperial Chemical Industries to develop the first IOL made of polymethylmethacrylate (PMMA), mainly used in airplanes at that time. In 1949 Dr. Ridley was credited to perform the first IOL operation at St. Thomas’ Hospital in London. His work was met with disdain as this was a revolutionary idea of inserting a foreign object inside the eye. Further criticism stemmed from complications such as glaucoma, inflammation, inability to individualize the refractive strength of the IOL, and frequent dislocation of the IOL. Dr. Ridley admits that further work was necessary to address many of the complications, but his innovative work paved the way for modern advancements in IOL and cataract surgery[4] [8].

In 1978, Kai-yi Zhou implanted the first foldable IOL made of silicone. Some of the benefits of the foldable IOL are easier implantation and a small incision, resulting in less induced astigmatism, faster healing and fewer infections[9].

The conglomeration of foldable IOL, use of topical anesthetics in 1993 by Fischman, and the introduction of phacoemulsification in 1967 by Dr. Charles Kelman allowed for the modern extraction of cataracts to be effective and safer[10]. Phacoemulsification uses ultrasound to break up the cataract and then subsequently the cataract is aspirated from the eye. This development allowed surgeons to decrease the incision in the eye from 10mm to typically less than 3mm, which has the benefits of shorter recovery times, more stable surgery, and lower complication rate. In modern surgery, small incisions ranging from 1-3.0mm are made, the anterior lens capsule is opened in a usually curvilinear fashion (capsulorrhexis) and then lens is hydrodissected to loosen adherence to the capsule. Micro-instruments are used to help divide the lens into fragments and phacoemulsification is to break up and aspirate the cataract. An IOL, often foldable, is then inserted into the remaining lens capsule if possible[4].

Femtosecond Laser-Assisted Cataract Surgery (FLACS) was approved by the U.S. Federal Drug Administration in 2010. The femtosecond laser has imaging software to image the cornea, capsule lens and anterior chamber. After registry, the laser can perform corneal incisions for entry into the eye and for astigmatism correction, capsulotomy, and lens softening or fragmentation. Surgeons can use this technology for corneal astigmatism correction or in cases where advanced-technology lenses, such as astigmatism correcting (toric) or multifocal or trifocal lenses are inserted.

ECCE has also been advanced in more recent years with the description of a newer technique, manual small incision cataract surgery (MSICS, also SICS or SECCE). This more modern procedure is a low cost, smaller incision advancement of ECCE that is principally utilized in the developing world. It has the advantages compared to ECCE of a smaller, self-sealing, suture-less wound, and the advantages over phacoemulsification of lower cost and less need for technology.

Modern cataract surgery is extremely safe and efficacious, and we continue to push for advancements to improve outcomes and patient satisfaction. Integrated systems for the operating room to help position astigmatism-correcting lenses, Intraoperative aberrometry, heads-up, three dimensional visualization systems as well as many new technology IOLs that increase post-operative visual range and precision are recent developments that expand options and may improve outcomes for patients.

Although cataracts are one of the most common causes of vision loss and blindness across the world, advances in technology and innovations allowed the treatment of this pathology to be very safe and efficacious. Thanks to many of the innovators we have come a long way from the practice of couching. Unfortunately, many people do not have access to modern cataract surgery juxtaposed with an aging population, the incidence and prevalence of cataracts will continue to rise. Hopefully, with advances in the field, cataract surgery can become even safer and more accessible to all.