Iris retraction syndrome (IRS) is a rare condition that is characterized by a backbowing of the peripheral iris with apposition of the iris body to the anterior surface of the lens. This results in a substantial deepening of the anterior chamber in a manner that is opposite in configuration to iris bombe. IRS is typically seen in the setting of a retinal detachment and hypotony. [1][2][3][4]

The most significant risk factor for IRS is the presence of an underlying retinal detachment. Chronic ocular inflammation, a secluded pupil, and hypotony are also associated with this condition. [4] IRS has also been reported postoperatively; one instance occurred six months after cataract extraction and posterior chamber intraocular lens (IOL) implantation with pupillary block, another developed four weeks after pars plana vitrectomy in the setting of a secluded pupil, and a third occurred one week after clear cornea phacoemulsification with sulcus IOL placement. [2][5] In all three cases, an underlying rhegmatogenous retinal detachment (RRD) was discovered and repaired with subsequent restoration of normal iris configuration.

IRS typically occurs in the setting of a RRD that may or may not progress to proliferative vitreoretinopathy (PVR). The phenomenon of iris backbowing was initially thought to be secondary to vitreous shrinkage and mechanical traction on anterior segment structures in addition to ciliochoroidal detachment and zonular relaxation that rotated the iris posteriorly. [6][7][8] In fact, throughout most of the 20th century, this disease entity was deemed vitreous retraction syndrome. It was not until 1984 that Campbell published a case series of nine patients with similar findings of posterior displacement of the iris that the term iris retraction syndrome was introduced. [1]

Campbell proposed that IRS begins with a RRD, which leads to egress of fluid through a “subretinal pump,” now known to be the retinal pigment epithelium (RPE), at a rate that exceeds aqueous production. [1][9] This in turn leads to hypotony, secondary inflammation, ciliochoroidal detachment, and an influx of protein and cells into the vitreous cavity. [2][3] The suction-like effect behind the iris leads to pupillary seclusion and iris retraction. Eventually, PVR can result. Proof for the hydrodynamic pressure gradient theory was presented in cases of patients with retinal detachments who reverted multiple times between an iris bombe configuration and an iris retraction configuration with the implementation and discontinuation of aqueous suppressants, respectively. It was thought that aqueous suppression tipped the hydrodynamic balance in favor of fluid egress through the subretinal pump, thus creating a vacuum-like effect that pulled the iris posteriorly. Discontinuation of aqueous suppression allowed for greater rate of aqueous formation, pushing the iris into bombe configuration.

Geyer and colleagues refuted the hydrodynamic pressure gradient theory by presenting two cases of IRS in the setting of non-rhegmatogenous, exudative retinal detachments. [4] In both cases of serous detachment, the retracted iris returned to a normal configuration after pupillary dilation and resolution of synechial adhesions, months before retinal reattachment took place. The absence of retinal holes or breaks in both cases led to speculation by the authors that the “subretinal pump” theory was flawed due to lack of a direct conduit between the intraocular fluid and the RPE. Instead, the authors speculated that chronic ocular inflammation leads to decreased aqueous production by the ciliary body and increased leakage from the iris vasculature. These processes, along with retrograde flow through the trabecular meshwork in the setting of hypotony, cause pressure in the anterior chamber to rise above pressure in the posterior chamber, resulting in posterior bowing of the iris. [5] Chronic inflammation also causes irido-zonular and irido-ciliary adhesions which seal the iris against the anterior face of the lens and lead to pupillary block, preventing movement of aqueous down the new pressure gradient. The authors concluded that pharmacological treatment of the inflammation and aggressive mydriasis reverse these processes and result in resolution of IRS, even without treatment of the underlying retinal detachment.

Despite this speculation, the vast majority of cases of iris retraction syndrome that have been reported have occurred in the setting of a RRD.

Patients may present at any age but typically endorse a history of painless vision loss in the affected eye secondary to RRD. [1]

Visual acuity is usually poor and may be count fingers or worse in the setting of a subacute or chronic retinal detachment. Pupillary exam generally reveals a minimally reactive pupil as a result of near-complete or complete (360 degrees) posterior iris synechiae with central iris-lens apposition. Although hypotony is usually seen in these cases, the intraocular pressure may also be normal. Slit lamp examination may reveal a mild to moderate degree of intraocular inflammation characterized by corneal edema (microcystic edema or Descemet’s folds), anterior chamber reaction (cell and flare), and posterior iris synechiae. The anterior chamber is significantly deepened, and gonioscopy reveals a wide open angle due to retrodisplacement of the peripheral iris away from the angle (Figure 1A). The iris body is apposed to the anterior lens face with disappearance of the posterior chamber (Figure 1B). Cataract formation may also result as a consequence of aqueous diversion. Ciliochoroidal detachment or effusions may also be seen especially in the setting of hypotony. Fundus examination and B-scan ultrasonography typically reveal some combination of retinal detachment, choroidal detachment, or PVR if the condition is longstanding (Figure 2). [1][3]

Figure 1: Slit lamp photos showing (A) retrodisplacement of the peripheral iris (white arrows) and (B) deepening of the anterior chamber (double-headed white arrow) with apposition of the iris-lens interface and significant posterior iris synechiae.

Painless vision loss is the most common presenting symptom in IRS due to RRD. [1] Additionally, signs and symptoms of intraocular inflammation may be present including injection, tearing, and photophobia. 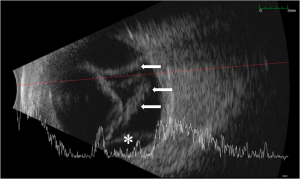 Diagnosis is made via slit lamp biomicroscopy, gonioscopy, fundoscopy, and B-scan ultrasonography. Ultrasound biomicroscopy may also provide greater detail of anterior segment structures in the setting of iris retraction syndrome. [10]

Pharmacologic dilation with disruption of the central posterior synechiae has been shown to result in resolution of iris retraction due to re-formation of the posterior chamber and anterior displacement of the iris body away from the lens surface. [4] However, in the case of longstanding or permanent synechiae, medical management is unlikely to provide any benefit.

Surgical options which can be considered include pars plana vitrectomy with iris synechiolysis or scleral buckle with surgical iridectomy. [2] However, in cases of longstanding RRD or PVR, visual prognosis is inherently poor and repair may be unlikely to provide significant benefit. In these cases, laser peripheral iridotomy can be considered to relieve the IRS and prevent conversion to iris bombe. [1]

Patients with untreated IRS can spontaneously convert to iris bombe configuration with secondary angle closure. [1] Longstanding inflammation in the setting of IRS with an untreated RRD or PVR will typically lead to a blind, phthisical eye, necessitating enucleation.

Visual prognosis is dependent on the age of the RRD causing the IRS. The shorter the amount of time between onset of RRD and surgical repair, the more favorable the prognosis. Longstanding RRD with PVR tends to have a very poor prognosis.