Posterior Polar cataracts (PPC) represent a medically and surgically unique subset of cataracts. Incidence is not well characterized though they are proportionally less common than most other forms of cataract. Multiple genes have been implicated with autosomal dominance inheritance patterns[1] [2] [3] [4] [5] [6] [7] [8] [9] [10] as well as observed spontaneous development. Loci and genes associated with these cataracts have also been implicated in global eye conditions such as anterior segment mesenchymal dysgenesis and persistent hyperplastic primary vitreous. [11] [12] PPCs often arise at the end of a hyaloid artery remnant, which can result in a range of pathology from the benign "Mittendorf dot" to a more clinically relevant cataract. Cataracts form early in life, but may become more clinically significant over time. Bilateral eye involvement is reported in 65-80% of cases. [13] [14] [15] Children at risk for possible secondary amblyopia require specific attention to multi-modal therapies that are needed. [16] [17]

Different clinical classification schemes have been proposed in the literature. Phenotypic appearance and clinical course are among the variables included. Stationary PPCs are reported have better visual acuity with anatomic features distinguished by a central opacity on the posterior capsule surrounded by rings, thus creating the appearance of a bull’s eye. Progressive PPCs are reported to manifest with enlarging radiations with increasing symptoms over time. [18] [19] Other classification schemes grade PPC s based on their clinical appearance and the presence or absence of associated posterior sub-capsular (PSC) or nuclear sclerotic (NSC) lens changes (Table 1). [15]

– Type 1: PPC associated with posterior subcapsular cataract. – Type 2: Round or oval discoid opacity with a ringed appearance like an onion with or without grayish spots at the edge. – Type 3: Round or oval discoid opacity sharply defined with dense white spots at the edge often associated with weak, thin, or absent posterior capsule. The white dense spots are a diagnostic sign (Daljit Singh sign) of posterior capsule rupture or extreme thinning. – Type 4: Combination of the above 3 types with nuclear sclerotic cataract

Adult patients with PPCs may present with symptoms of glare and haloes despite “normal” Snellen visual acuity. Because of their central location, even small posterior polar cataracts may be visually significant with worse symptoms under bright light or miotic conditions (Figure 1).  Standard history, refraction and comprehensive examination should be performed. Screening for amblyopia will also assist with prognosis. Adjunct subjective testing may include brightness acuity testing and other variable lighting conditions to further draw out the nature of symptoms. 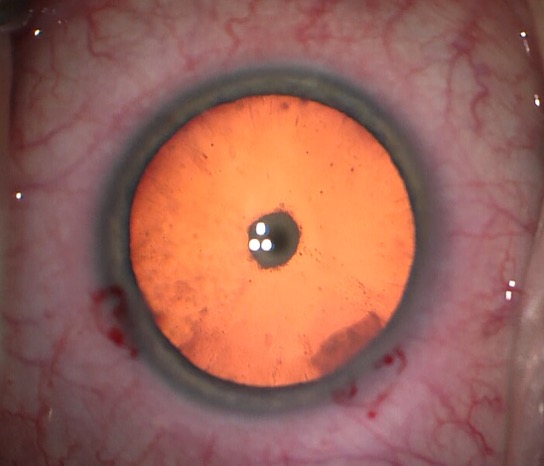 Biometric testing including biometry or ultrasound are standard for implant calculation purposes. Adjunct anterior segment imaging techniques such as optical coherence tomography (OCT), Scheimpflug imaging [20] or ultrasound as these may help to assess the potential adherence of cataract to the posterior capsule. [21] Pujari et al in their first study described the preoperative assessment of posterior capsular integrity using a posterior segment OCT with a +20 D lens, which helps to suggest a capsular deficiency in posterior polar cataracts. An intact posterior capsule shows a regularly convex contour, whereas a loss in the tracing of posterior capsule at the paracentral region and disturbance in contour with a localized protrusion of lens matter (the conical sign) depicts possible posterior capsule dehiscence and thereby aid in predicting a pre-existing deficit.[22]

In-depth patient counseling should follow accordingly. When present with other developmental pathologies, surgery can present an array of difficult challenges.

Aside from the significant visual distortion and disturbances resulting in glare and halos as described above, there are also important surgical considerations of PPCs. Because of possible adherence of PPCs to the posterior capsule, cataract extraction carries the risk of posterior capsular breaks and the potential for vitreous loss during surgery. Case reports of spontaneous rupture of the capsule have been reported as well. [23] [24] Posterior capsule rupture (PCR) has been the subject of numerous reports with its own secondary consequences and may be as high as 36 % of cases in some literature reports. [17][25] [26] [27] [28]

Surgical techniques [29] [30] [31] [32] [33] [34] [35] [36] [37] are driven by the characteristics of the associated nucleus density and the presence or absence of fusion of the PPC to the posterior capsule. For even rarer conditions of spontaneous rupture of the posterior capsule or associated dysgenesis, multiple sub-specialty surgery or additional adjunct techniques will be necessary. [38] [39]

Anesthesia decisions should be individualized to the patient’s overall health and need. Wound construction is driven by the preferred approach and potential intraocular lens implants (IOL) that might be utilized once the cataract is extracted. There is a range of techniques reported from bimanual micro-incisional phaco [40] which carries the advantages of minimal induced corneal wound astigmatism and stable anterior chamber maintenance, to manual extracapsular cataract extraction (ECCE) for use with denser nuclei (higher rate of complications reported). [28]

If considering conversion to manual ECCE, placement of the main keratome (or scleral wound) should take into consideration how easily the wound can be enlarged with minimal corneal endothelial damage. Straight clear corneal wounds may be easier to enlarge with less posterior cornea damage than long anterior multiplanar wounds. Scleral tunnels likely offer the most cornea endothelial protection and least astigmatic induction for large wounds.

Viscoelastic choice is driven by the potential of vitreous loss. Having a dispersive viscoelastic for primary use is advised and may serve multiple purposes (endothelial protection, covering posterior capsule rupture, as well as lens delineation). [41]

Partial hydrodissection is possible and has been described when extracting PPCs[43] though is generally avoided with preference for hydrodelineation to avoid potential disruption of adhesions between the posterior capsule and PPC. This “inside-out” technique has been described in multiple citations. [18][19][27][44]

Intra-operative stability should be the goal of all cataract surgery and is germane to removal of PPCs. Minimizing intra-op wound leak, managing any concerns of posterior pressure and selecting appropriate phaco machine settings are essential to achieving stable intra-operative phacodynamics.

For PPCs associated with softer nuclei, lower energy parameters during each step are sufficient and may be accompanied with torsional cutting as available with newer generation platforms. Minimal rotation of lens material is advised to avoid extraneous capsule manipulation and stress. Lower than typical aspiration flow rates may be advised as rapidly flowing free fragments may not be the goal during removal.

Removal of as much lens material as possible prior to any direct manipulation of the posterior polar lens component is advantageous in the event of a possible posterior capsule rupture and potential retained lens fragments. Various alternative pre-chopping [45], as well as sculpting and chopping [46] maneuvers have been described to help delay posterior polar manipulation. [15] Nuclear material is removed first with subsequent anterior epi-nuclear and cortical material next.

When performing bimanual surgery on a soft lens with PPC, a blunt or rounded second hand instrument can be used to help “feed” anterior lens material into phaco needle or irrigation-aspiration (I/A) hand-piece. This decreases the need to “strip” capsule adjacent material under a tense fashion which may be connected to the PPC. Rapid, high vacuum assisted pulling is undesirable. Vacuum should be utilized judiciously with an intended balance of having anterior material drawn gently to the central anterior area where it can be removed while minimizing radiating posterior tension. Denser nuclei will have higher energy requirements with specific additional focus on minimizing lens "chatter” and high velocity fragments flowing in the anterior chamber.

In the case of posterior capsular rupture limited anterior vitrectomy is performed and judgement is made on the appropriate location for the IOL. In posterior polar cataracts, the deficient/abnormal capsular morphology could be, pre-operatively identified using ASOCT and specifically categorized into 3 categories, conical, moth-eaten, and ectatic types as described by Pujari et al in their second study. In the conical variant, the posterior opacity–capsular junction does not show the usual convex contour, and there is a breach in the posterior capsule at the posterior pole, with the associated extension of opacity into the anterior vitreous to a varying extent. In the moth-eaten variant, the capsule shows the expected contour to the edge of the opacity, but beneath the opacity, it shows clearly deficient capsule. In addition, the posterior opacity shows a completely clear area within it resembling the morphology of the moth-eaten appearance of the edge of the leaves. In the ectatic type, the capsule appears intact with a densely adherent opacity; however, the capsule fails to show a regular contour. It possesses an uneven appearance with multiple ectatic bulges along the anterior vitreous.[47]

Follow up is similar for routine post-surgical cataract cases when surgery is uncomplicated. For complicated cases with posterior capsular rupture, additional attention is required for pressure-related and associated vireo-retinal sequelae.